Today I would like to tell you about a trio of new AWS tools that are designed to help individual developers, teams of developers, and system administrators store, integrate, and deploy their code on the cloud. Here is the lineup, in the order that you’d generally put them to use:

We are launching AWS CodeDeploy today and you can start using it right away. I’ll share additional information on the launch plans for the other two tools as it becomes available. These tools were designed to work well independently and to provide even more functionality and value when used together.

Let’s take a closer look at each of these tools!

CodeDeploy
CodeDeploy was designed to help you to deploy code at scale, with a focus on rapid development and rapid deployment in mission-critical situations where the cost of failure is high. As I mentioned earlier, it was designed to update an EC2 fleet without the need for any down time. CodeDeploy will automatically schedule updates across multiple Availability Zones in order to maintain high availability during the deployment process.

Each instance must be running a copy of the CodeDeploy Agent. This is a small, open source (Apache 2.0 licensed) app that knows how to copy and validate files, set up permissions, and run scripts on Linux and on Windows. You can also configure it to run at startup on your custom AMIs, and you can even install it manually on running instances.

You can use CodeDeploy from the AWS Management Console, the Command-Line Interface, or through a set of APIs. For example, you can initiate an entire deployment with one API call. CodeDeploy can also be used in conjunction with your existing Chef recipes and Puppet scripts.

Let’s walk through the process of setting up and deploying an Application. The CodeDeploy Console includes a handy demo option that I’ll use to get started. While there are a lot of screens below, most of this is setup work that you’ll do one and benefit from for a long time!

The demo uses a AWS CloudFormation template to launch three EC2 instances, all tagged as CodeDeployDemo:

I begin by creating an Application:

Then I create a versioned Revision for deployment. My sample revision is stored in S3, but it could also come from CodeCommit or GitHub:

I need to tell CodeDeploy which IAM role to use when it interacts with other AWS services like EC2 or Auto Scaling (I can create a new one or use an existing one): 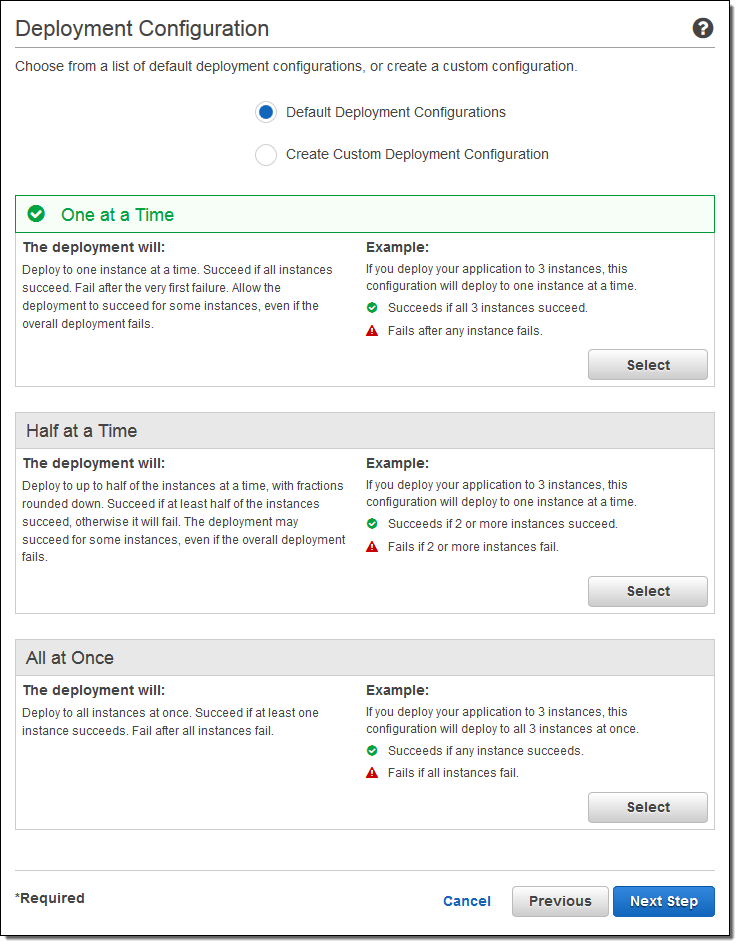 Here’s how I would create a custom Deployment Configuration: 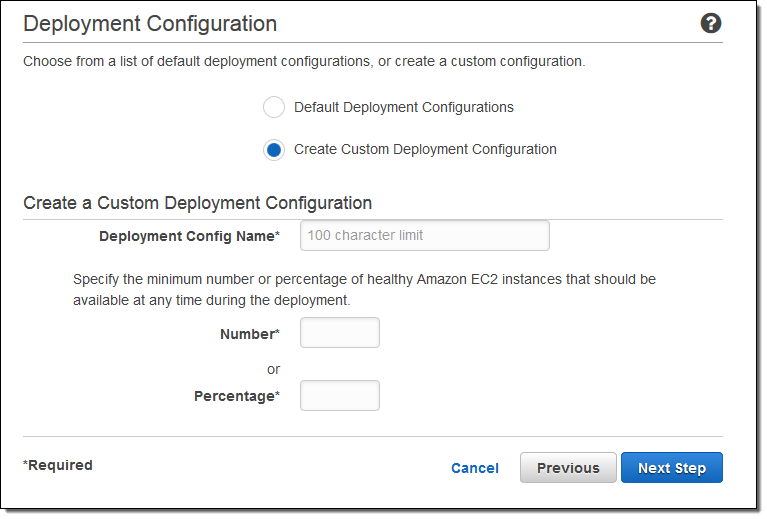 Now I can review the settings and perform my first deployment: 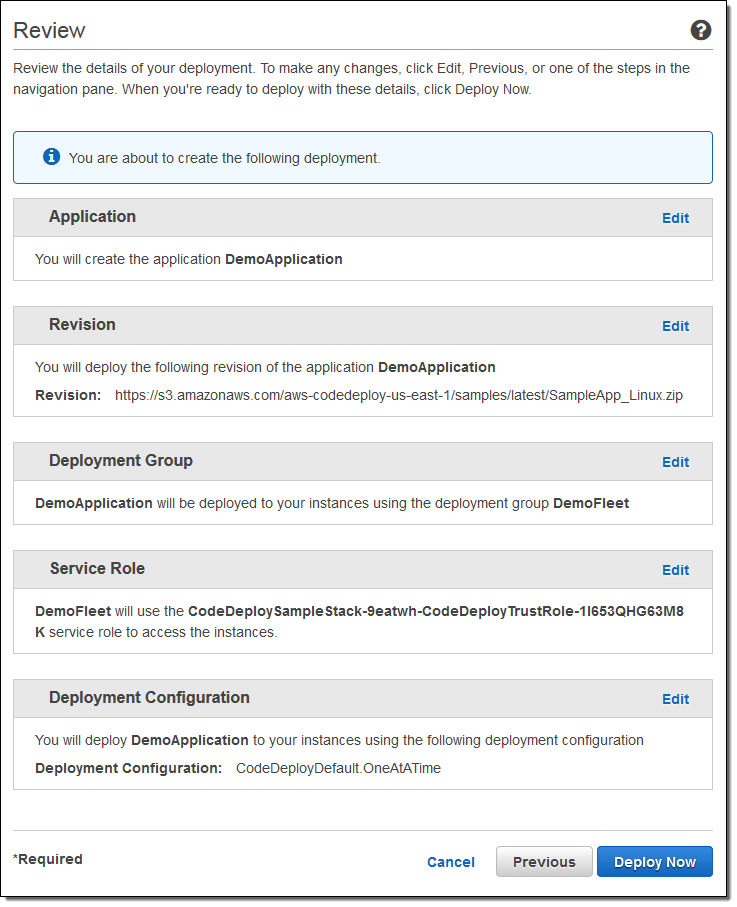 The Application is deployed per my Deployment Configuration and the Console updates as the work proceeds:

Once I have taken care of the setup work, I can easily create more Deployments and deploy them with a couple of clicks: 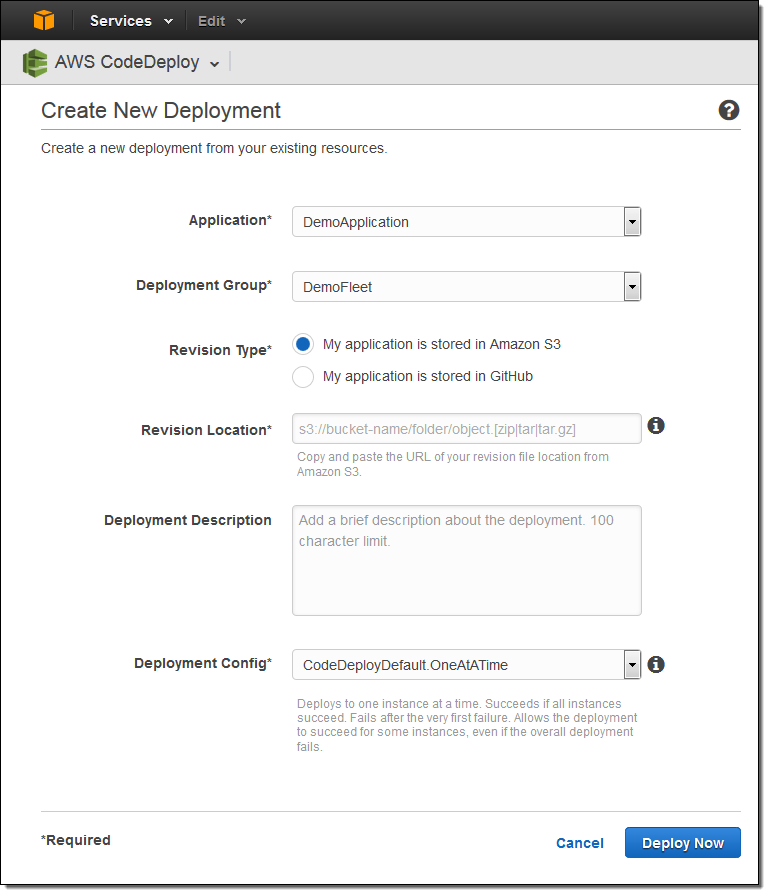 CodeCommit
Your application’s source code is a concrete representation of your intellectual property. It is also the most visible artifact of the hours that you spend slaving away at the keyboard! AWS CodeCommit is designed to keep it safe and sound. As I have already mentioned, it is a managed revision control service that hosts Git repositories. Your existing Git skills, tools (command line and IDE), and practices will continue to be applicable.

You (or your organization’s Cloud Administrator) can simply create a CodeCommit repo, assign permissions, and open it up to commits. CodeCommit will store code, binaries, and metadata in redundant fashion with high availability. You will be able to collaborate with local and remote teams to edit, compare, sync, and revise code.

Because CodeCommit runs in the AWS Cloud, it will work really well in situations where your development team works from multiple locations or involves collaboration with vendors or other partners (no more punching holes in corporate firewalls). You don’t have to worry about running out of space (go ahead, check in those images and videos). CodeCommit encrypts your files at checkin time and uses IAM roles to control developer and administrative access.

Here’s a sneak peek at a preliminary version of the CodeCommit Console: 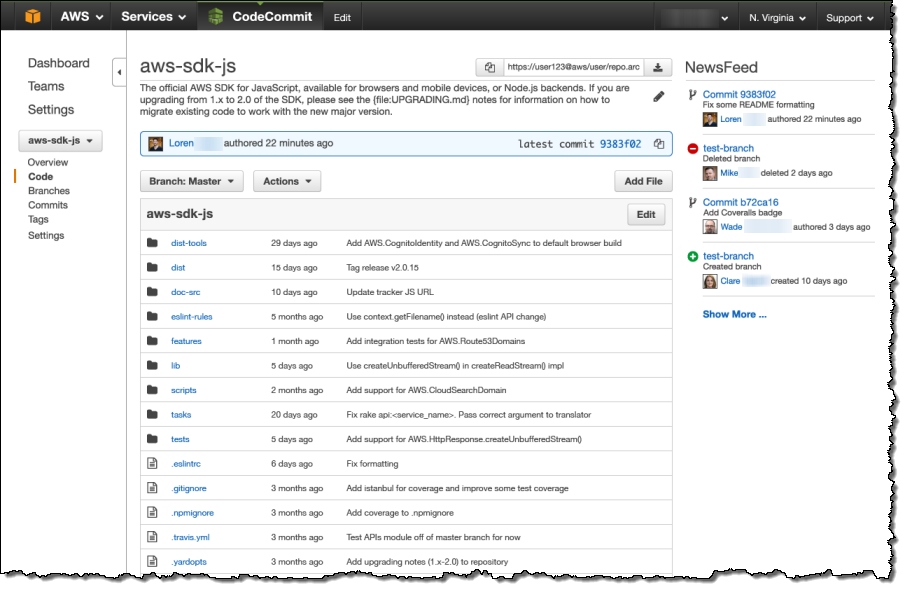 AWS CodePipeline will help you to codify and automate your release process. It should make your entire process more robust and more efficient. You’ll spend more time on features and less time on infrastructure. You will be able to test each code change as you make it, with the assurance that it will have pass through whatever test gates that you define before it is released to your customers.

You will be able to use the CodePipeline user interface to construct a graphical model of your release process using a combination of serial and parallel actions. The workflow can include time-based or manual approval gates between each stage. For example, you could choose to deploy new changes to staging servers only during weekday working hours in your own time zone.

CodePipeline watches your source code repo for changes and triggers the appropriate workflow. A release workflow could build the code in a production build tree, run test cases, and deploy tested code to a staging server. Upon final approval (a manual gate), the code can be promoted to production and widely deployed.

Here’s a sneak peek at the CodePipeline Console: 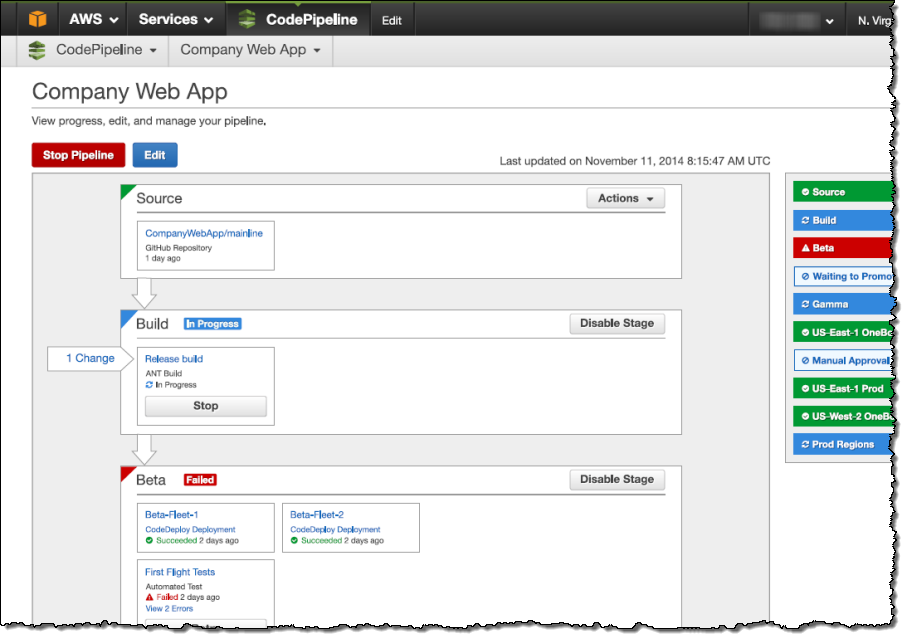 Availability
CodeDeploy is launching today and you can start using it now. Please stay tuned for more information on CodeCommit and CodePipeline!