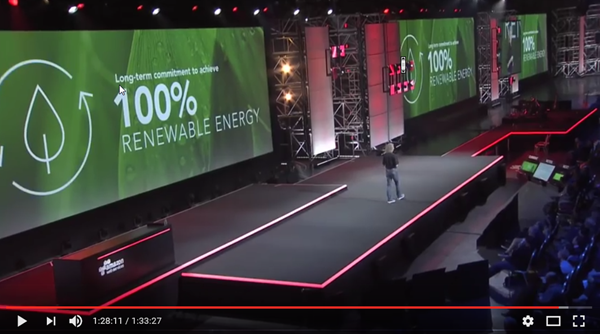 We’re kicking off the New Year with some great news on the AWS sustainability front – three additional wind and solar projects went live at the end of 2016 and are now delivering energy onto the electric grid that powers AWS data centers!

As a quick recap, at re:Invent 2016, Vice President and Distinguished Engineer James Hamilton announced on the main stage that we had exceeded our goal of being powered by 40% renewable energy by the end of 2016, and thanks to the commitment of the AWS team and our great energy partners, we set a new goal to be at 50% by the end of 2017.

In addition to Amazon Wind Farm Fowler Ridge in Benton County, Indiana, which went into production in early 2016, three new projects came online in December, including:

Amazon Wind Farm US East – We first announced the partnership with Avangrid Renewables (then called Iberdrola Renewables) for Amazon Wind Farm US East in July of last year to begin construction of the wind farm. It is the first commercial-scale wind farm in North Carolina and one of the first in the southeastern United States, spanning Pasquotank and Perquimans counties in North Carolina.

So far AWS has announced a total of 10 renewable energy projects and these wind and solar farms are expected to produce 2.6 million megawatt hours of energy — enough energy to power over 240,000 U.S. homes annually!

To follow our march towards our long-term goal of 100% renewable energy, be sure to check out the AWS & Sustainability web page.

Beyond the sustainability initiatives focused on powering the AWS global infrastructure, Amazon is investing in several other clean energy activities across the company. Some of our other projects include Amazon Wind Farm Texas – a 253MW wind farm in Scurry County, Texas — green rooftops, and the District Energy Project that uses recycled energy for heating Amazon offices in Seattle. For more information on Amazon’s sustainability initiatives, visit www.amazon.com/sustainability.