We announced AWS CodeCommit last November (see New AWS Tools for Code Management and Deployment) at AWS re:Invent. I am happy to announce that it is now generally available and that you can start using it today.

Let’s do a quick refresh on the CodeCommit feature set before taking the service for a spin.

CodeCommit Overview
CodeCommit is a managed revision control service that hosts Git repositories and works with existing Git-based tools. Files are organized in to repositories, with no limits on repository size or file count. As you’ll soon see, your existing Git skills, tools, and practices remain applicable. 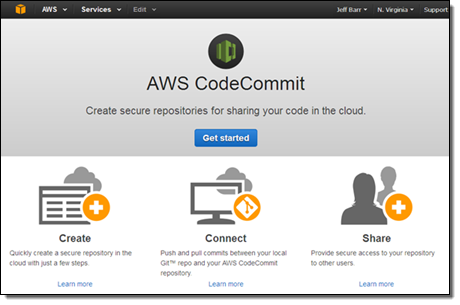 Behind the scenes, CodeCommit implements Git in a scalable, redundant, and durable fashion so that your code and other assets will be safe and accessible. CodeCommit stores your files in encrypted repositories and uses IAM roles to control developer and administrative access. All data that moves to and from your development environment goes across HTTPS or SSH connections.

CodeCommit runs in the AWS Cloud and is a great fit for situations where your development team works from multiple locations or when you need to collaborate with vendors or other partners.

Here’s what some of our early users had to say about CodeCommit: 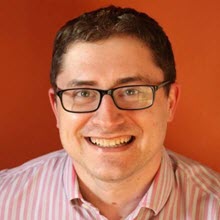 “We have hundreds of thousands of video players and were looking for a source control system that would allow us to store each video player code and related web assets in a separate repository. With AWS CodeCommit, we can scale to any number of repositories and don’t have to worry about the repository size. Our developers use the Git interface and tools that they are already familiar with, and we use the same user identities to manage both our AWS infrastructure and AWS CodeCommit.” 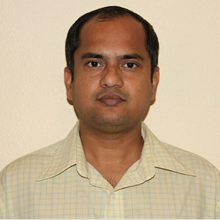 “Previously, we were using a centralized version control system that was hosted on-premises. AWS CodeCommit gives us a scalable distributed source control system that is fully managed. We no longer worry about hardware scaling costs and the pay-as-you-go pricing model gives us the flexibility to add or remove users without procuring licenses ahead of time. We can now focus on developing great applications for our consumers and instead let AWS CodeCommit tackle the challenges of managing a highly available source control system.”

CodeCommit in Action
In order to gain some real-world experience with CodeCommit, I decided to create a mirror of the AWS SDK for PHP repository. I started out with a fresh EC2 instance running the Amazon Linux AMI. I installed the newest version of the AWS Command Line Interface (CLI), set up my credentials, and installed Git in the usual way:

I also configured my Git identity:

I configured my AWS CLI to reference IAM user awscli by default. I gave this user permission to perform administrative actions on my CodeCommit repositories by attaching the AWSCodeCommitFullAccess policy:

This policy, as the name implies, allows me to perform all of the CodeCommit operations on all of my repositories. In a real-world environment, a more restrictive set of permissions would be more appropriate. For example, you might want to allow only certain senior developers to create and delete repositories.

Then I configured Git so that it could authenticate itself to CodeCommit. I instructed it to use a credential helper as follows:

Because the credential helper is supplied as part of the aws command, the Git configuration setting can include a reference to any of the profiles that I have configured for use with the CLI. This option would be helpful if I was working on several projects in distinct repositories, each with individual credentials. In that case I would set the credential.helper on a per-repo basis like this:

With Git configured, I created my repository using the Console (I could have used the CLI’s create-repository command as well): 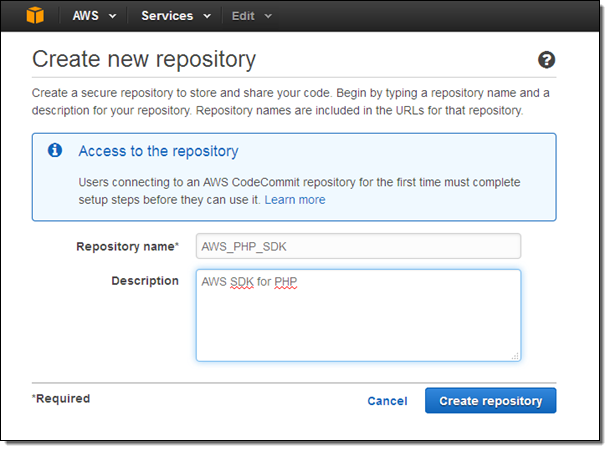 My repository was available for use right away! My CodeCommit Dashboard allowed me to see all of my repositories at a glance:

I was ready to add some content to the AWS_PHP_SDK repo, so I clicked on the URL icon and captured the HTTPS URL (the SSL URL is also available via the icon):

Then I cloned a copy of the SDK and pushed it to my repo:

I was about to learn more about my repo via the Console: 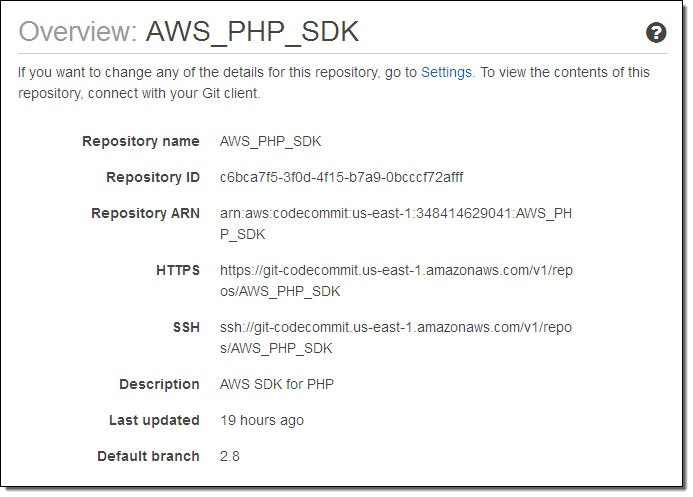 I also had the option to rename the repo and to adjust other settings: 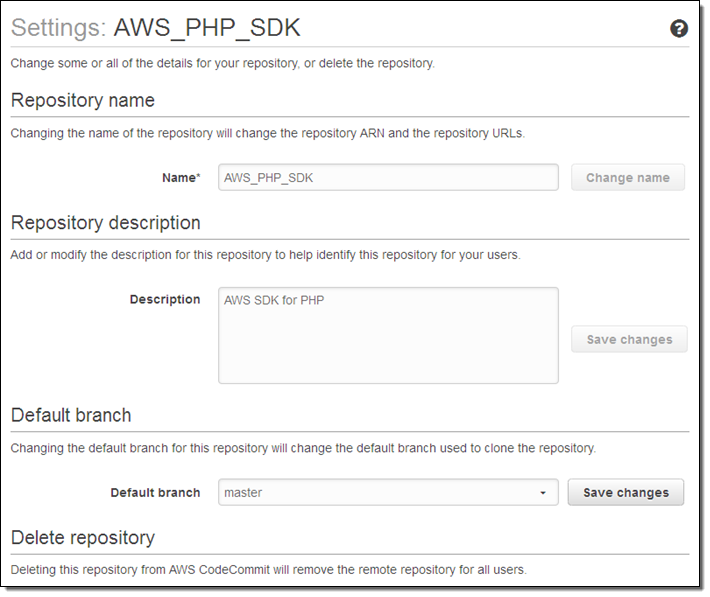 Available Now
CodeCommit is available now and you can start using it today!

You will be charged $1 per active user (defined as a unique IAM user or role, a federated user, or the root account) per month. You can store as many Git repositories as you’d like.

Each user comes with an allowance of 10 GB of storage and 2,000 Git requests (a push or pull that transmits repository objects) per month, all pooled across the users with each AWS account. Additional storage costs $0.06 per GB per month; additional requests are $0.001 each.

As part of the AWS Free Tier, new and existing customers can benefit from 5 active users, 50 GB of storage, and 10,000 Git requests per month at no charge.

In the Works
We have big plans for CodeCommit! Here are some of the things that we are working on next: