From time to time, one of my blog posts will describe a way to make use of two AWS products or services together. Today I am going to go one better and show you how to bring the following trio of items in to play simultaneously:

All Together Now
With today’s launch, it is now even easier for you to build, host, and scale SWF applications in Ruby. A new, dedicated layer in OpsWorks simplifies the deployment of workflows and activities written in the AWS Flow Framework for Ruby. By combining AWS OpsWorks and SWF, you can easily set up a worker fleet that runs in the cloud, scales automatically, and makes use of advanced Amazon Elastic Compute Cloud (Amazon EC2) features.

This new layer is accessible from the AWS Management Console. As part of this launch, we are also releasing a new command-line utility called the runner. You can use this utility to test your workflow locally before pushing it to the cloud. The runner uses information provided in a new, JSON-based configuration file to register workflow and activity types, and start the workers.

Console Support
A Ruby Flow layer can be added to any OpsWorks stack that is running version 11.10 (or newer) of Chef. Simple add a new layer by choosing AWS Flow (Ruby) from the menu: 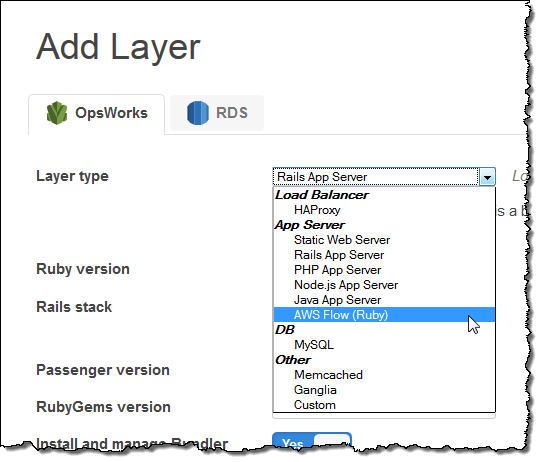 You can customize the layer if necessary (the defaults will work fine for most applications): 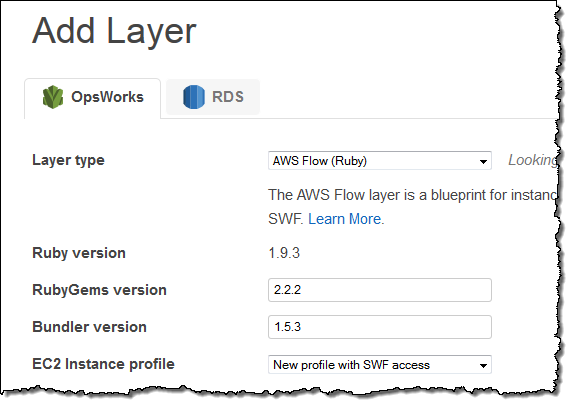 The layer will be created immediately and will include four Chef recipes that are specific to Ruby Flow (the recipes are available on GitHub):

The Runner
As part of today’s release we are including a new command-line utility, aws-flow-ruby, also known as the runner. This utility is used by AWS OpsWorks to run your workflow code. You can also use it to test your SWF applications locally before you push them to the cloud.

The runner is configured using a JSON file that looks like this:

Go With the Flow
The new Ruby Flow layer type is available now and you can start using it today. To learn more about it, take a look at the new OpsWorks section of the AWS Flow Framework for Ruby User Guide.