Over the past year, the Amazon Chime SDK has been helpful for customers that find themselves needing to move group programs that were originally done in-person to a virtual setting. Interactive group programs can take a number of forms across different industries. For example, healthcare customers want to help behavioral health professionals facilitate group therapy sessions, educational institutions want to help instructors use peer learning techniques in their online classrooms, and event organizers want to help speakers lead workshop-format sessions at virtual industry conferences and trade shows.

All of these applications need to support a workflow where: (1) a large group of attendees join an online meeting; (2) at some point during the meeting, all or some attendees splinter off to form two or more smaller groups; and finally, (3) all attendees reconvene in the larger group meeting. We generalize these use cases with the label “breakout rooms.”

Developers can add breakout room experiences to their application built with the Amazon Chime SDK by starting with SDK primitives and layering call control elements to support the desired experience.

The Amazon Chime SDK React Component Library includes reusable and extensible components based on the React framework and is designed to give you a head start on integrating common collaboration features into your application. In this blog, we will walk you through an application built on the Amazon Chime SDK React Component Library that extends existing components to provide a simple breakout room experience. The resulting application will:

The code shown in this blog can be found in Amazon Chime SDK Meetings with Breakout Rooms on GitHub.

Note: Deploying this demo and receiving traffic from the demo created in this post can incur AWS charges.

Before completing the rest of the steps to make this feature work, we will show you how to modify the Amazon Chime SDK React demo app to allow for hosting on Amazon Simple Storage Service (Amazon S3) through Amazon CloudFront. When adding a feature like breakout rooms, you need to make the following changes to the components in the react demo app: 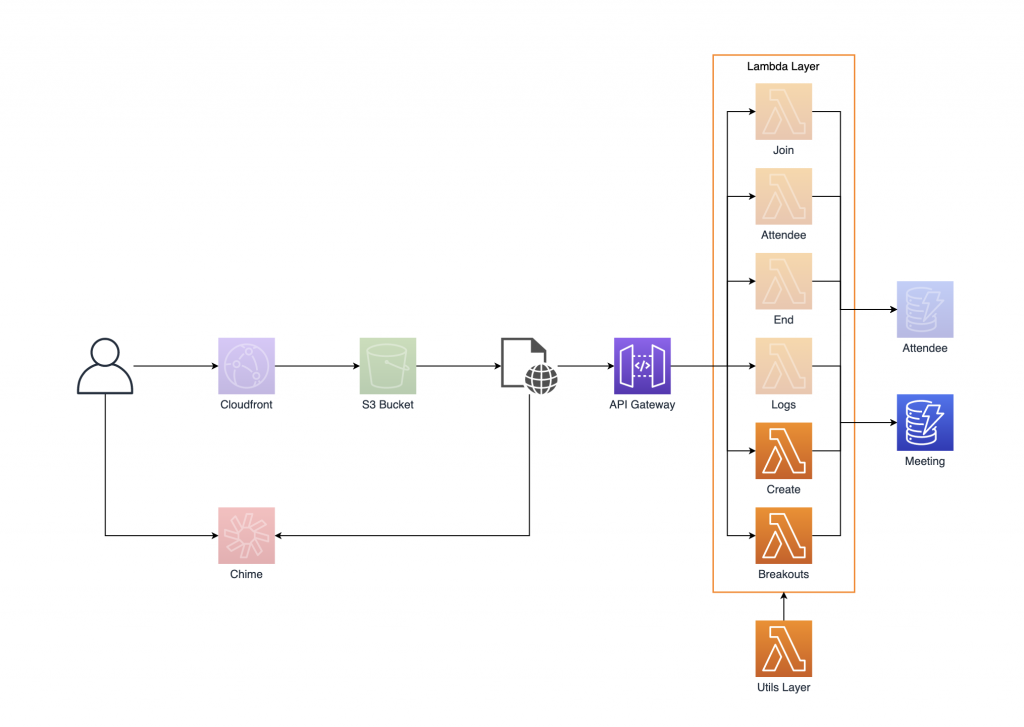 To complete the addition of the new features breakout room feature, you need to link the front end and back end resources together. To add the ability to create new Amazon Chime SDK meetings for breakout rooms, several resources are required. Breakout rooms are just one example of how to build an additions and how the front and back end work together to implement a complete feature. Other features can be customized and expanded to build a complete feature set.

This snippet shows a function that loops through meetingCount based on the number of breakout meetings requested in breakoutOutCount. For each loop, this function calls the createMeeting function in the utils\api.ts with three arguments:

This snippet below from the api.ts file makes an API call through an API Gateway to a Lambda function to create the Amazon Chime SDK meetings for breakout rooms. It passes to the API Gateway via the URL the arguments that were originally sent from the createBreakOutRooms function. This function requires a response from the API Gateway and Lambda that contains the new meeting information.

In the snippet below from the createMeeting Lambda, the function has taken three arguments (Parent Meeting ID, Breakout Meeting ID, Region) from the Amazon Chime SDK React demo app through the API Gateway and makes a call to the Amazon Chime SDK (chime.createMeeting) to create a new meeting. It then returns the newly created meeting information to the API Gateway which returns it to the Amazon Chime SDK React demo app. This Lambda function also uses functions in the Utils Lambda Layer to query (utils.getMeeting) and store information (utils.putBreakoutMeeting) in the Meetings DynamoDB.

This demo can be deployed via the AWS CDK so you can see how this works in your own AWS Account.

S3 buckets may not be automatically removed and should be checked.