Today, we’re excited to announce C# as a supported language for AWS Lambda! Using the new, open source .NET Core 1.0 runtime, you can easily publish C# code to AWS Lambda from a variety of popular .NET tools. .NET developers can now build Lambda functions and serverless applications with the C# language and .NET tools that they know and love. With tooling support in Visual Studio, Yeoman, and the dotnet CLI, you can easily deploy individual Lambda functions or entire serverless applications written in C# to Lambda and Amazon API Gateway.

Lambda is the core of the AWS serverless platform. Originally launched in 2015, Lambda enables customers to deploy Node.js, Python, and Java code to AWS without needing to worry about infrastructure or scaling. This allows developers to focus on the business logic for their application and not spend time maintaining and scaling infrastructure. Until today, .NET developers were not able to take advantage of this model. We’re excited to add C# to the list of supported languages and enable a new category of developers to take advantage of Lambda and API Gateway to create serverless applications.

Look at a simple C# Lambda function. If you’ve already used Lambda with Node.js, Python, or Java, this should look familiar:

As you can see, this is straightforward code, but there are a few important details to call out. Unlike other languages supported on Lambda, you don’t need to implement a specific interface to mark your code as a Lambda function. Instead, just provide a handler string when uploading your code to tell Lambda where to start execution.

Similar to other languages supported on Lambda, you have a few choices for handling input and return types in your function. The most basic choice is to use a low-level stream interface of System.IO.Stream. Alternatively you can also apply the default serializer at the assembly or method level of your application, or you can define your own serialization logic by implementing the ILambdaSerializer interface, which is also provided by the Amazon.Lambda.Core library.

Look at the function signature for the ProcessDynamoEvent function and notice DynamoDBEvent in the signature. This comes from the Amazon.Lambda.Core library provided by Lambda, along with many more classes for other AWS event types. You can add a project dependency on this NuGet package to get access to a static Lambda logger, serialization interfaces, and a C# implementation of the Lambda context object.

For logging, you can use the static Write or WriteLine methods provided by the C# Console class, the Log method on the Amazon.Lambda.Core.LambdaLogger class, or the Logger property in the context object. You can get more information about the C# programming model in the AWS Lambda Developer Guide.

The AWS Toolkit for Visual Studio supports developing, testing, and deploying .NET Core Lambda functions and serverless applications. The toolkit has two new project templates to help you get started: 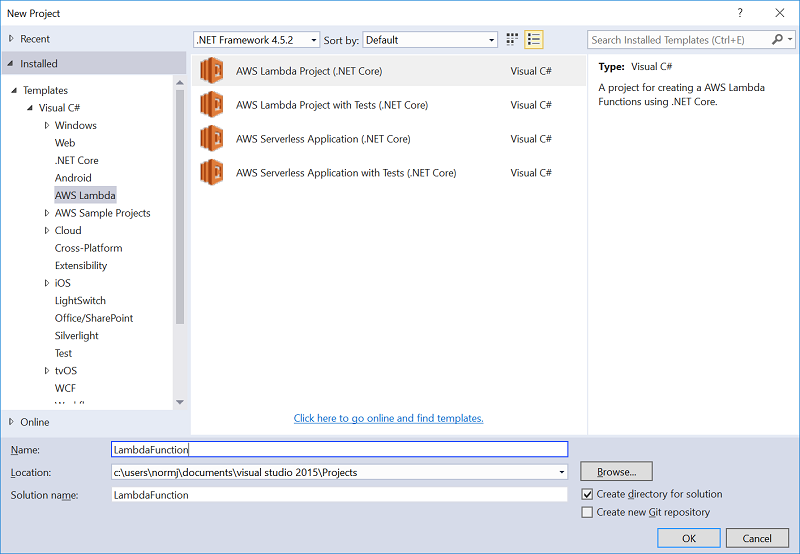 After your code is ready, you can deploy directly from Visual Studio by right-clicking your project and choosing Publish to AWS Lambda… in the Solution Explorer. From there, the deployment wizard guides you through the deployment process. 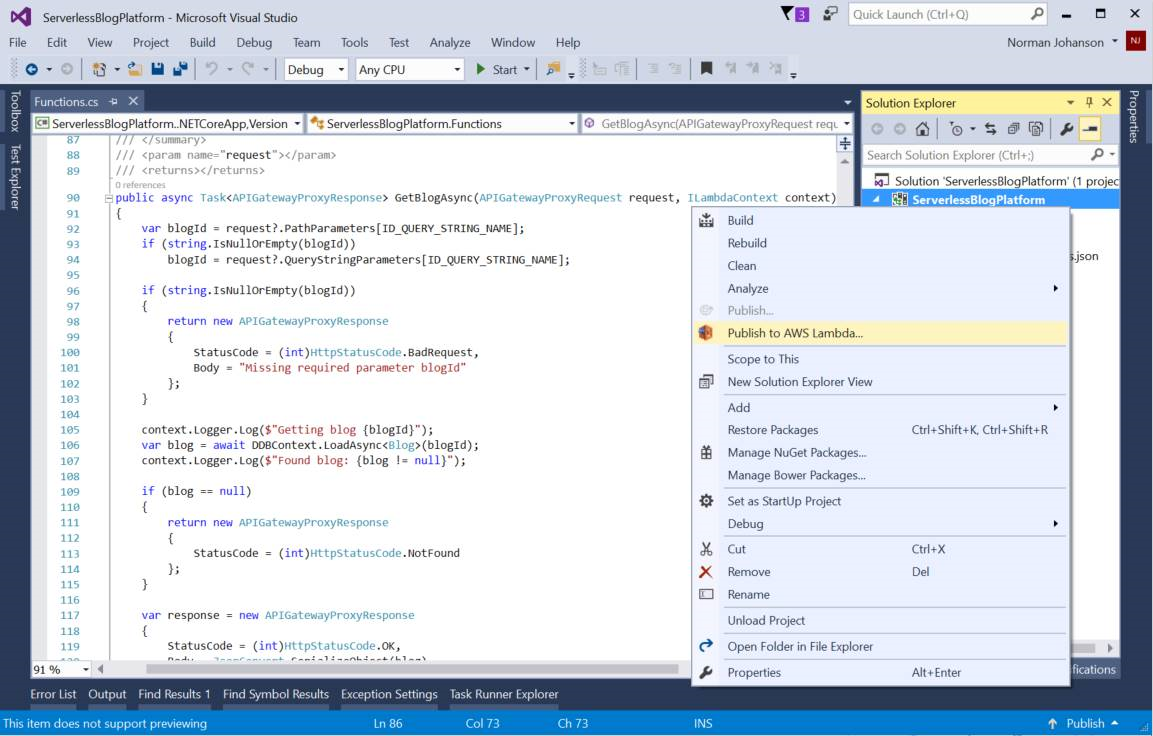 One of the great features of .NET Core is cross-platform support. With the traditional .NET framework, developers are required to build and run their applications on Windows. However, .NET Core enables you to develop your C# code on any platform of your choice and deploy it to any platform as well.

If you’re not developing on Windows and don’t have access to the AWS Toolkit for Visual Studio, you can still use .NET tools to easily publish your C# Lambda functions and serverless applications to AWS. Even if you are using the AWS Toolkit for Visual Studio, knowing how to use the dotnet CLI can be helpful in automating your build and deployment process.

After you create a .NET Core project, enable the Lambda tools in the dotnet CLI using tools like Yeoman; just add a tools dependency on the Amazon.Lambda.Tools NuGet package to your new project. 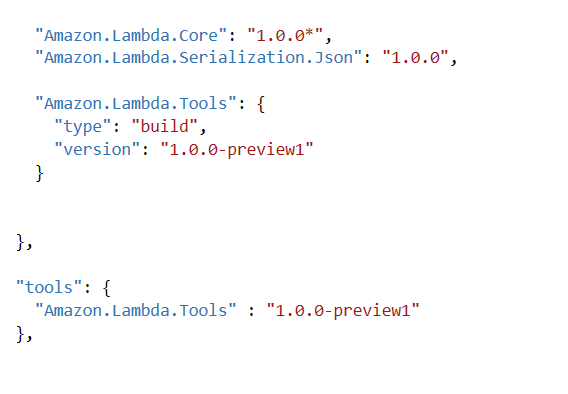 The Amazon.Lambda.Tools NuGet package adds commands to the new dotnet CLI that allow you to deploy your Lambda functions and serverless applications to AWS, no matter what platform you’re on. Even if you are developing in Visual Studio on Windows, the AWS Lambda tools in the dotnet CLI are helpful for setting up a CI/CD pipeline for your application.

To learn more about the new Lambda commands in the dotnet CLI, type dotnet lambda help in your project directory. 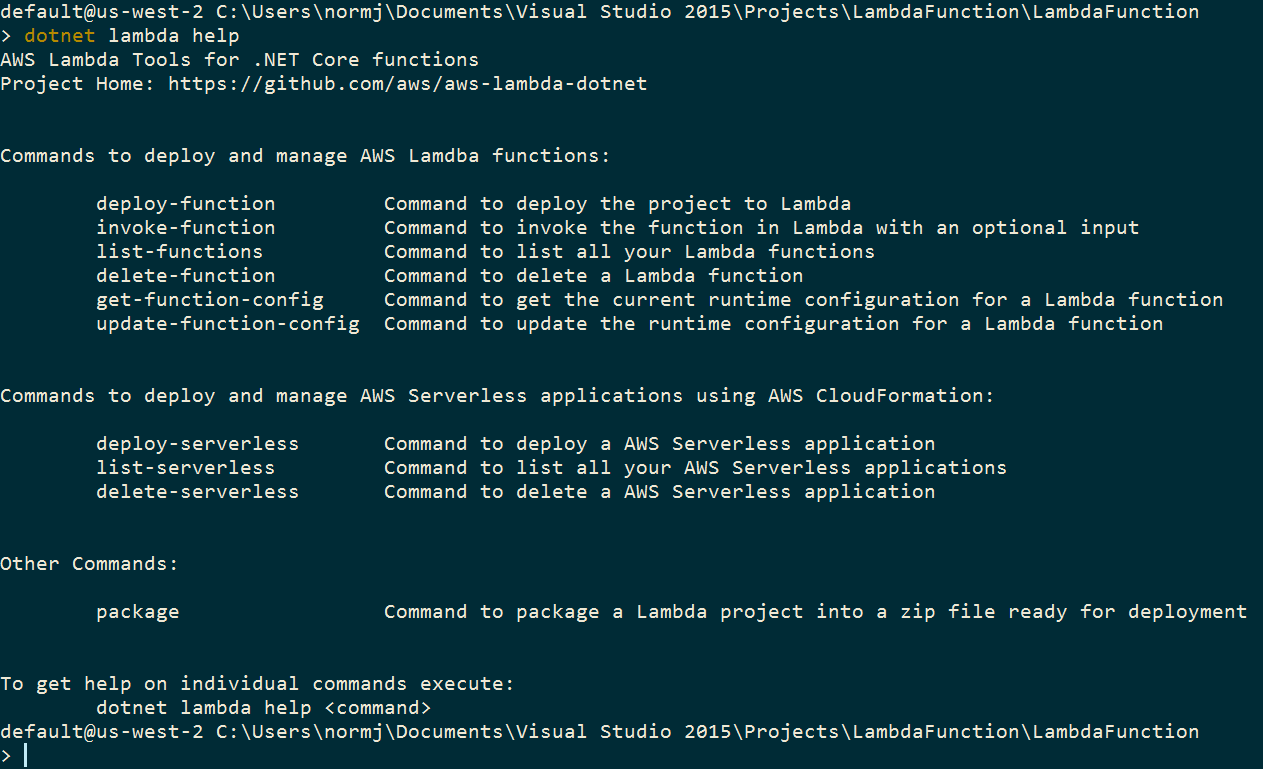 We’re excited to open up AWS Lambda for C# applications through the .NET Core runtime. You can find more information on writing C# Lambda functions in the AWS Lambda Developer Guide. Download the AWS Toolkit for Visual Studio to get started or check out the Lambda extensions to the dotnet CLI.