Improving and securing your game-binaries distribution at scale

One of the challenges that game publishers face when employing CI/CD processes is the distribution of updated game binaries in a scalable, secure, and cost-effective way. Continuous integration and continuous deployment (CI/CD) processes enable game publishers to improve games throughout their lifecycle.

Often, CI/CD jobs contain minor changes that cause the CI/CD processes to push a full set of game binaries over the internet. This is a suboptimal approach. It negatively affects the cost of development network resources, customer network resources (output and input bandwidth), and the time it takes for a game update to propagate.

This post proposes a method of optimizing the game integration and deployments. Specifically, this method improves the distribution of updated game binaries to various targets, such as game-server farms. The proposed mechanism also adds to the security model designed to include progressive layers, starting from the Amazon EC2 instance that runs the game server. It also improves security of the game binaries, the game assets, and the monitoring of the game server deployments across several AWS Regions.

Why CI/CD in gaming is hard today

Game server binaries are usually a native application that includes binaries like graphic, sound, network, and physics assets, as well as scripts and media files. Game servers are usually developed with game engines like Unreal, Amazon Lumberyard, and Unity. Game binaries typically take up tens of gigabytes. However, because game developer teams modify only a few tens of kilobytes every day, frequent distribution of a full set of binaries is wasteful.

For a standard global game deployment, distributing game binaries requires compressing the entire binaries set and transferring the compressed version to destinations, then decompressing it upon arrival. You can optimize the process by decoupling the various layers, pushing and deploying them individually.

In both cases, the continuous deployment process might be slow due to the compression and transfer durations. Also, distributing the image binaries incurs unnecessary data transfer costs, since data is duplicated. Other game-binary distribution methods may require the game publisher’s DevOps teams to install and maintain custom caching mechanisms.

How can containers help?

The use of ECR with either ECS or EKS takes care of the last mile deployment to the Docker container host.

In this post, I use Docker multi-stage builds for containerizing the game asset builds. I use AWS CodeBuild to manage the build and to deploy the updates of game engines like Amazon Lumberyard as ready-to-play dedicated game servers.

Using this method, frequent changes in the game binaries require less than 1% of the data transfer typically required by full image replication to the nodes that run the game-server instances. This results in significant improvements in build and integration time.

I provide a deployment example for Amazon Lumberyard Multiplayer Sample that is deployed to an EKS cluster, but this can also be done using different container orchestration technology and different game engines. I also show that the image being deployed as a game-server instance is always the latest image, which allows centralized control of the code to be scheduled upon distribution.

This example shows an update of only 50 MB of game assets, whereas the full game-server binary is 3.1 GB. With only 1.5% of the content being updated, that speeds up the build process by 90% compared to non-containerized game binaries.

For security with EKS, apply the imagePullPolicy: Always option as part of the Kubernetes best practice container images deployment option. This option ensures that the latest image is pulled every time that the pod is started, thus deploying images from a single source in ECR, in this case.

The Git repository is composed of five core components ordered by their size:

The game deployment process in EKS

At this point, you’ve pushed the updated image to the designated container registry in ECR (/$IMAGE_REPO_NAME:$IMAGE_TAG). This image is scheduled as a game server in an EKS cluster as game-server Kubernetes deployment, as described in the sample.

In this example, I use  imagePullPolicy: Always.

By using imagePullPolicy, you ensure that no one can circumvent Amazon ECR security. You can securely make ECR the single source of truth with regards to scheduled binaries. However, ECR to the worker nodes via kubelet, the node agent. Given the size of a whole image combined with the frequency with which it is pulled, that would amount to a significant additional cost to your project.

However, Docker layers allow you to update only the layers that were modified, preventing a whole image update. Also, they enable secure image distribution. In this example, only the layer MultiplayerSample_pc_Paks_Dedicated is updated.

The following diagram shows an example end-to-end architecture of a full-scale game-server deployment using EKS as the orchestration system, ECR as the container registry, and CodeBuild as the build engine.

Game developers merge changes to the Git repository that include both the preconfigured game-engine binaries and the game artifacts. Upon merge events, CodeBuild builds a multistage game-server image that is pushed to a centralized container registry hosted by ECR. At this point, DevOps teams in different Regions continuously schedule the image as a game server, pulling only the updated layer in the game server image. This keeps the entire game-server fleet running the same game binaries set, making for a secure deployment. 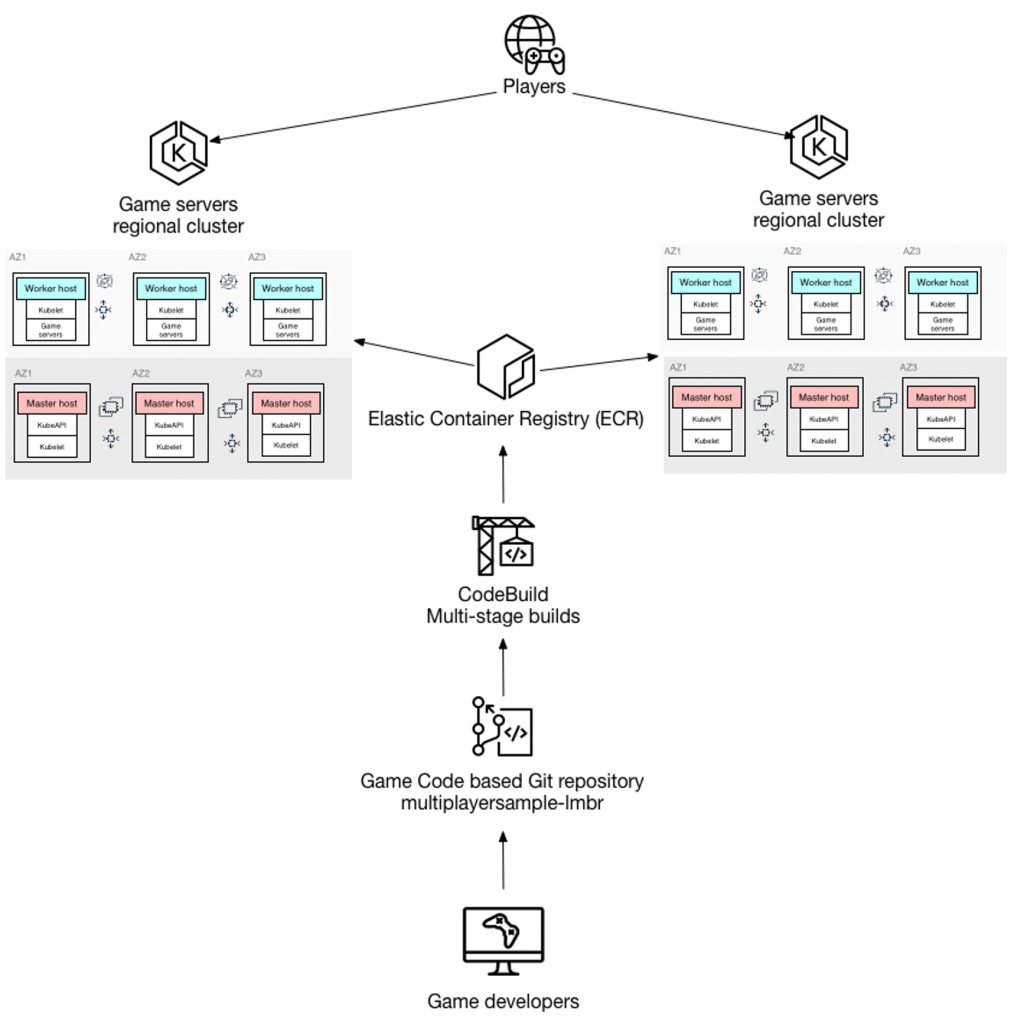 I published two examples to guide you through the process of building an Amazon EKS cluster and deploying a containerized game server with large binaries.

In this post, I demonstrated a reduction of more than 90% of the network traffic required by implementing an effective CI/CD system in a large-scale deployment of multiplayer game servers.