Nothing pushes the computational power of modern computers quite like real-time 3D games. From the vector algebra used to transform 3D scenes to 2D screen space, to the visibility queries used for rendering and AI, to the deformation of surfaces around bones for characters, to the integrators used to solve complex chains of physics constraints: game engines require a robust and extremely efficient mathematical foundation to build these complex systems.

Due to the historical origins of Lumberyard 1.x, what we had was a mix of legacy CryEngine math mixed together with a math library inherited from our Double Helix acquisition, along with some Lumberyard-specific additions sprinkled throughout. Over time, we realized our old math library had a lot of shortcomings, including: highly inconsistent API design that confused developers and led to unpredictable results; outdated concepts around compiler auto-vectorization; questionable and undocumented usage of estimate instructions; hardcoded intrinsics woven into class implementations that made updates for modern CPUs (like ARM variants) a real pain; and an archaic transform representation that required far too much effort to integrate into modern game feature implementations.

To support next generation Lumberyard development, we’ve addressed the above points with some impressive results in terms of improvements to performance and accuracy.

Here is a quick overview of some of the changes that have been made:

Awkward operators have been removed from these classes. This includes naked equality and product operators where the meaning of such operations were unclear. In our new implementation, callers should explicitly use the IsClose or TransformVector/TransformPoint methods to resolve any ambiguity in what the operations are actually doing.

Finally, poorly defined and confusing overloads, such as Normalize/NormalizeExact/NormalizeApprox, have been audited and condensed. Where appropriate estimate instructions exist and show meaningful performance advantages, we have added an Estimate overload that exposes the reduced precision instruction, but by default all operations not marked Estimate are now full precision. We’ve optimized to an extent that there are still performance improvements with the new code, despite the increased accuracy.

Due to historical reasons, the Transform class in Lumberyard stores its internal state in a 3×4 matrix rather than in distinct translation, orientation, and scale fields. As most gameplay systems expect separate translation and orientation values, we incurred a large cost decomposing the matrix representation into distinct values, and then converting back to matrix form again upon fetching results. Such gameplay systems included physics, AI, networking, and audio. In addition, the matrix representation allowed invalid transform states to be stored, such as matrices with skew or singular matrices. Because of this, we have removed matrix oriented accessors from the AZ::Transform API and moved its internal storage to distinct translation, orientation, and scale values. This allows optimal interaction with gameplay code, physics, AI, pathfinding, networking, and other subsystems that expect distinct values, and we support an efficient conversion to Matrix3x4 for use-cases like rendering where the matrix form is preferable to the decomposed form.

Our rewrite includes types and operations for Vec1, Vec2, Vec3, and Vec4 float and integral types. This SIMD layer has scalar fallback, SSE 4.1, and ARM Neon backends, and makes it easy for future support of AVX-512 and other enhanced register-width SIMD extensions. Anyone familiar with the SIMD intrinsics used for the VMX execution units on PowerPC architectures should find the new AZ::Simd layer somewhat familiar.

The new SIMD trig methods are significantly more accurate than the previous SIMD sine and cosine methods, and are faster by a considerable margin as well.

The VectorFloat SIMD wrapper from Lumberyard 1.x has also been removed, as benchmarking using modern compilers confirmed that it provided no benefit and actually harmed performance in many situations, and only served to make calling code more complex.

We now have slightly more than 1,000 math unit tests that have very close to 100% coverage across the entirety of the math library. These test the performance of the various math classes and APIs, which we’ve been using to validate the performance impact of all of our changes.

Both the new and old SIMD transcendental functions have been tested for numerical accuracy. We will go into greater detail on this in a future post. 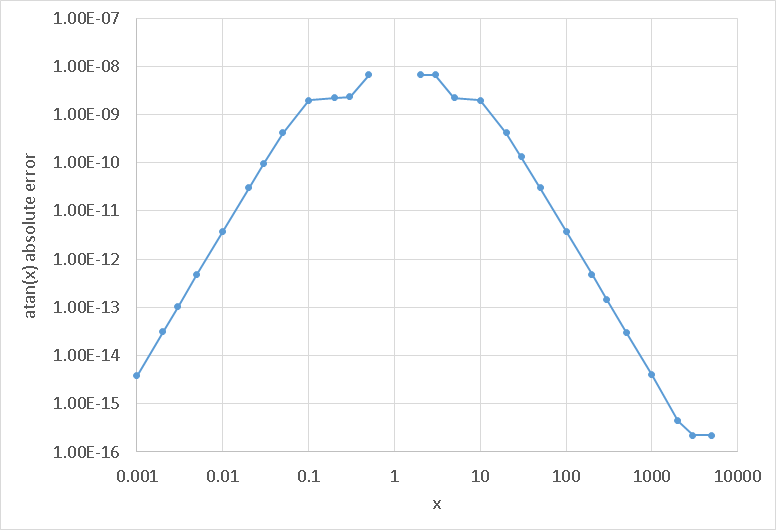 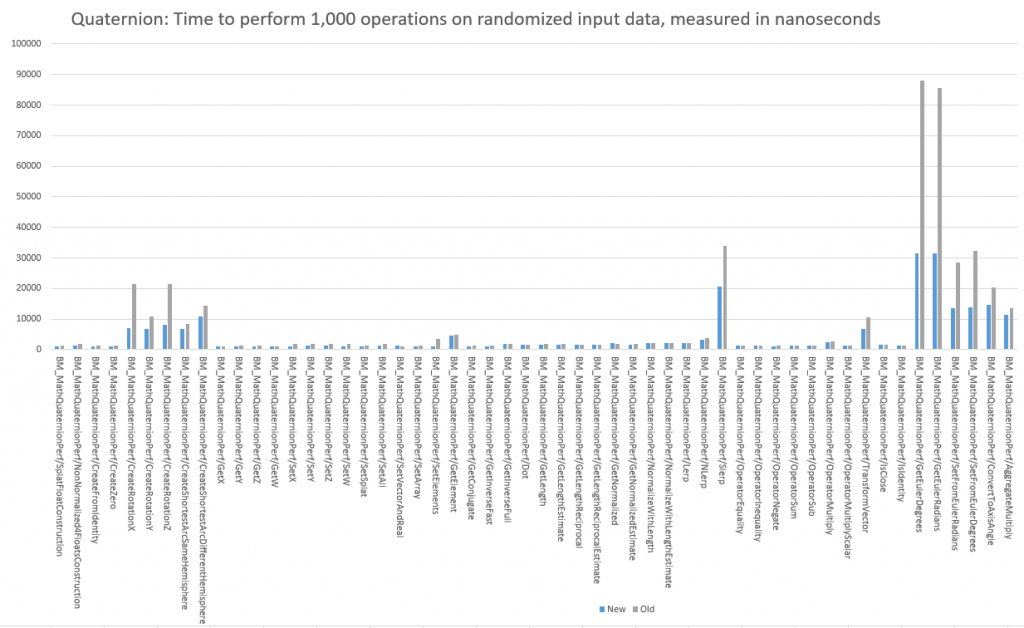 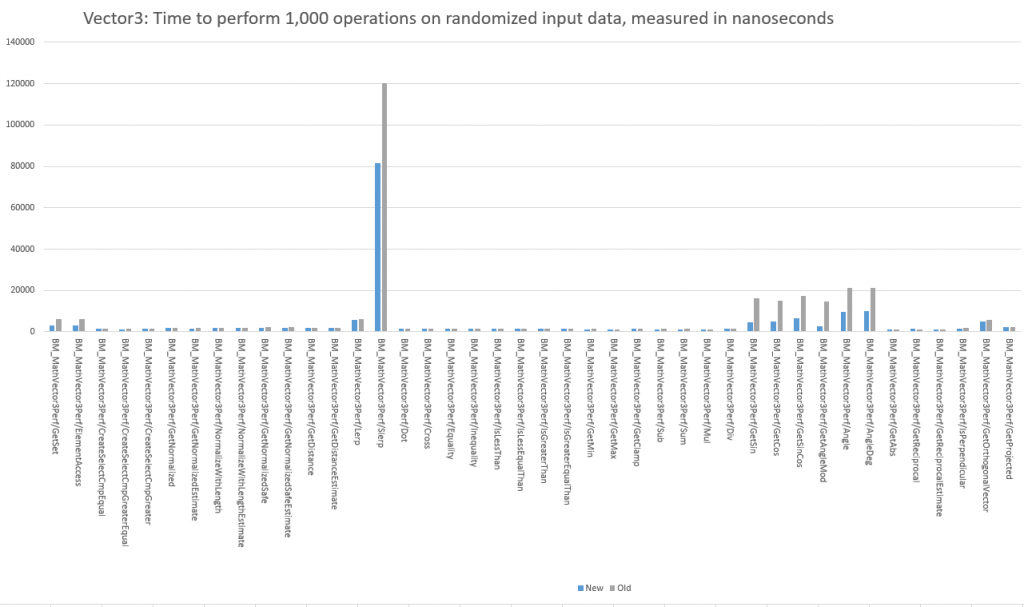 Overall, we’ve made a number of improvements to the mathematical foundations of Lumberyard in the last year; changes that we are excited to roll out to you in a future release. The end result will be faster frame rates, better platform support especially on ARM devices, higher accuracy, and more compute resources available for animation, special effects, and gameplay. Additionally, this new math library enables us to deliver some exciting new features, as well as backfill some longstanding gaps in the engines functionality.

Let us know your thoughts in the comments, and look for a follow-up on this topic soon!