Apache Solr’s distributed deployment comes with the challenges of setting up a highly available and scalable cluster. The operational overhead of maintaining a stable and elastic Solr cluster increases along with the volume of data and number of queries. Deploying Solr on Kubernetes helps remove some of these complexities so you can run a scalable, stable, and distributed Solr installation with low maintenance.

In this blog post, we explain how to deploy a highly available, scalable, and fault-tolerant enterprise-grade search platform with Apache Solr using Amazon Elastic Kubernetes Service (Amazon EKS). Amazon EKS is a managed service that can be used to run Kubernetes (K8s) on Amazon Web Services (AWS) without needing to install, operate, and maintain your own Kubernetes control plane or nodes. We also demonstrate how Prometheus is used for monitoring, observability, alerting, and auto-scaling the deployment.

The deployment is divided into three logical layers. The first layer is the SolrCloud layer, followed by the Apache ZooKeeper ensemble layer, and finally a control applications layer running Prometheus. 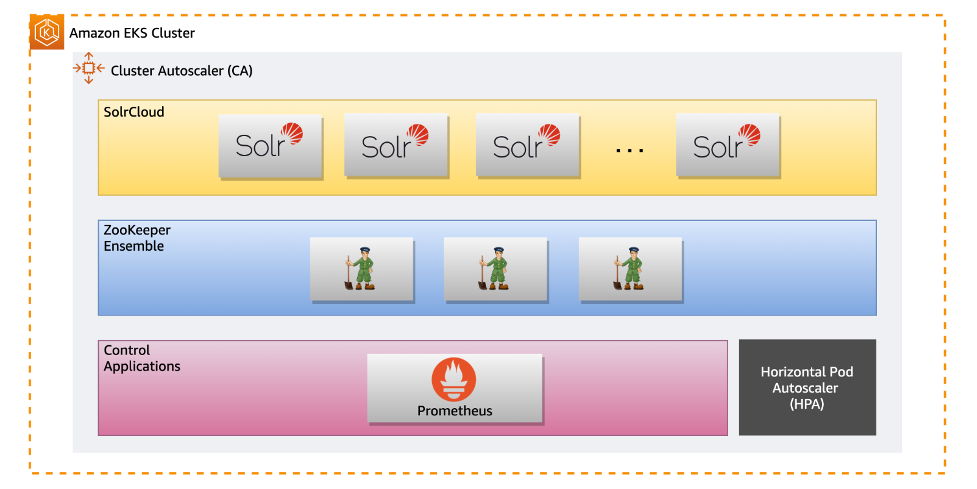 Each layer is deployed in its own Amazon EKS-managed node group, which acts as the physical layer providing storage and compute. In order for the ZooKeeper ensemble to achieve quorum, pods inside the ensemble must be able to recognize themselves and know where every other pod within its managed node group is. The SolrCloud managed node group must also be aware of the ZooKeeper pods via connection strings so that it can make use of the ZooKeeper pods for coordinating search tasks. This is achieved by deploying the pods as stateful containers using Kubernetes StatefulSets, which ensures a stable and unique network identifier for each pod. StatefulSets also provide guarantees about the ordering and uniqueness of pods, making it suitable for ZooKeeper and SolrCloud, which need network identifiers that are unique and stable.

The config files and parameters discussed in the subsequent sections can be found in our GitHub repository.

When deployed on a distributed cluster, Apache Solr is known as SolrCloud. Each server within the cluster consists of a single instance of Java Virtual Machine (JVM) running a Solr server process.

Finally, a replica is the physical representation of a shard that actually stores the data. There can be one or more copies of a replica, and the number of replicas directly affects search query performance. The cluster indexes documents within the collections and runs distributed search tasks. This happens without the need to have a dedicated leader node in the cluster to allocate search tasks, or keeping the replicas or shards in sync. Instead, SolrCloud uses a ZooKeeper ensemble to manage the tasks, replicas, and shards. 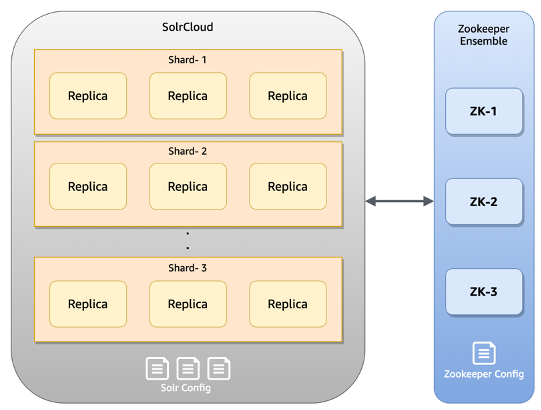 Solr replicas are stored using persistent volumes, which use Amazon Elastic Block Store (Amazon EBS) volumes to implement a persistent volumes and claims (PVC) subsystem for the Kubernetes cluster. This storage architecture provides a PersistentVolume subsystem for storing the replicas, and PersistentVolumeClaim requests to be used by the StatefulSet to provision storage volumes on-demand as new SolrCloud pods join the cluster during a scale-out event. This enables decoupling of the storage layer with the data processing layer, and prevents loss of data. These Amazon EBS volumes are then backed up using EBS snapshots and stored into Amazon Simple Storage Service (Amazon S3) object storage.

Apache ZooKeeper is open source software that provides centralized service for maintaining configuration information, distributed synchronization, and group naming services for a large group of servers. A cluster of servers (ensemble) running the ZooKeeper application coordinates and provides distributed synchronization for SolrCloud. That the ZooKeeper ensemble is highly available and fault tolerant is important, and that the ensemble must maintain a quorum (that is, more than half of the total number of ZooKeeper servers running at all times to ensure a healthy and scalable SolrCloud). Pods running ZooKeeper application are deployed in a dedicated Amazon EKS-managed node group. An odd number of ZooKeeper pods is recommended to help majority election (ZooKeeper Leader Election) of a leader within the cluster in case the current leader pod fails.

Kubernetes pod disruption budget (PDB) helps improve the availability of the ZooKeeper ensemble by running a minimum number of pods required to maintain quorum within the managed node group. PodDisrutptionBudget allows you to limit the number of concurrent pod failures, thus ensuring high availability. Because the ZooKeeper ensemble must maintain a quorum, in this case with a total of three ZooKeeper pods, two pods are enough to achieve a quorum.

You can define PodDisruptionBudget for the ZooKeeper ensemble-managed node group within the zookeeper.yaml configuration file by setting the minAvailable property to a value of 2. You may also use PDB’s maxUnavailable property to limit the number of allowed concurrently failed or unavailable pods. Together, these two PDB properties ensures that a necessary number of ZooKeeper pods are always available.

The control application layer consists of pods running Prometheus monitoring system, which is open source and is used for real-time event monitoring and alerting. Pods running Prometheus are deployed in a separate managed node group within the Amazon EKS cluster. It monitors Solr metrics, which is then used to perform scaling of the SolrCloud pods within the SolrCloud managed node group.

Now that we understand the layers of the Solr architecture, let’s explore how deploying SolrCloud on AWS can solve the reliability and elasticity requirements at enterprise scale. The SolrCloud deployment can be autoscaled to maintain a high query and indexing rate. The deployment architecture allows scaling of Solr replicas, SolrCloud server processes (that is, Amazon EKS pods), and the underlying compute capacity (Amazon Elastic Compute Cloud [Amazon EC2]) of the Amazon EKS cluster.

The Amazon EKS cluster and all the managed node groups within it are deployed inside of a secure private subnet across three Availability Zones within an Amazon Virtual Private Cloud (Amazon VPC). This Multi-AZ deployment architecture helps maintain high availability and resiliency, and helps improve the overall fault tolerance of the architecture. 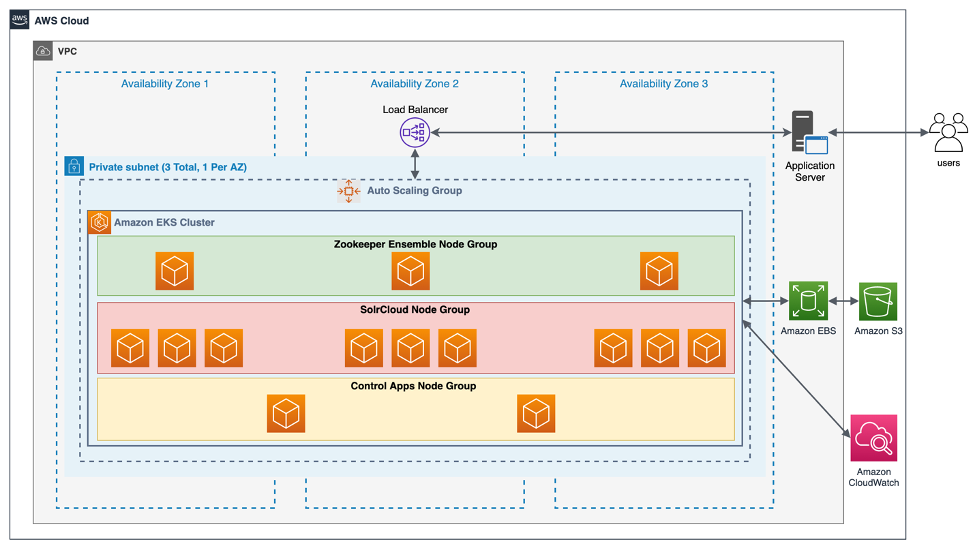 SolrCloud (version 8.x) comes with built-in autoscaling feature that allows replicas to be added or removed automatically from a pod depending on the metrics being monitored. The deployment uses a collection-level cluster policy to scale replicas. Cluster policies can also be applied at a shard or node (pod) level. You can configure SolrCloud autoscaler to track the search rate event by monitoring the requests per minute value available via the QUERY./select.requestTimes:1minRate metric, for scaling the replicas. This metric is monitored and used to scale the number of replicas in the SolrCloud cluster. Note that there are a number of other SolrCloud metrics available via the Solr metrics API that you can consider while defining and fine-tuning replica autoscaling for the SolrCloud cluster.

The deployment utilizes metrics exposed by SolrCloud, via the Solr Metrics API, to scale the number of pods. In this case, a Prometheus exporter is used to collect these metrics from the Solr Metrics API into Prometheus’ time series database that runs in the control applications-managed node group. These metrics can be used to implement a scaling policy to scale the number of pods using Horizontal Pod Autoscaler (HPA). HPA obtains these custom metrics using the Prometheus adapter and operates on the ratio between desired metric value and current metric value to scale up or down the number of pods.

This solution uses solr_metrics_jetty_dispatches_total metric that identifies the total number of requests received by the Solr application, to be exported to Prometheus. Prometheus adapter sends the metric to Kubernetes metrics server for the HPA to use. This metric is given a custom alias named solr_metrics in the Prometheus exporter’s adapterConfig.yml configuration file.

Note that depending on the use case and performance criteria, any other metric available via the Solr metrics API can be used to scale the SolrCloud pods via HPA.

The Horizontal Pod Autoscaler will continue to scale SolrCloud pods on existing Amazon EKS worker nodes (underlying Amazon EC2 compute instances) as long as there are enough compute resources available for the managed node group. However, as the number of pods grow, newer pods may ultimately fail and go into pending state as the managed node group runs out of resources to host additional pods within its available worker nodes.

Cluster autoscaler (CA) provides scalability to the managed node groups by scaling the worker nodes when SolrCloud pods cannot be scheduled on existing worker nodes. The Amazon EKS cluster autoscaler uses Amazon EC2 Auto Scaling groups behind the scenes to adjust the number of worker nodes in the cluster when pods fail and go into a pending status.

HPA and CA help autoscale the SolrCloud workload and its underlying compute capacity, respectively. This also makes the Solr search platform elastic as resources that are not required are gracefully taken out of service as demands shrink, thus saving costs.

In order to deploy this architecture, the following prerequisites must be met:

Detailed step-by-step installation instructions along with the required configuration files can be found in our GitHub repository. Following is an overview of the steps involved in the deployment and configuration:

Set up a Solr collection

A Solr collection can be created from the Solr Administration user interface. In order to access the administration UI, obtain its URL using kubectl get services solr-service command. The URL will be of the form http://<xxxxx>.<region_name>.elb.amazonaws.com:8983 (8983 being the default Apache SolrCloud listener port). Create a new collection named Books using the Collections option in the administration UI. 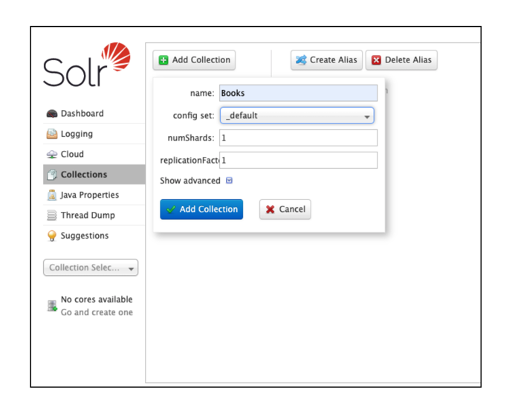 After the collection and the autoscaling trigger have been set up, select the collection in the menu, and use the Documents section to upload data. Use the sample dataset books.json, which can be found in the GitHub repository, to create the collection. 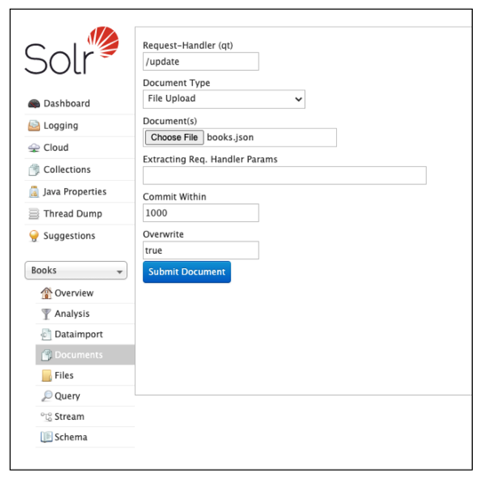 You can use the request generator script submit_mc_pi_k8s_requests_books.py to simulate the load of requests on the Books collection. The script generates a high volume of search requests sent to the cluster, thus resulting in SolrCloud autoscaling to trigger the scaling event and increase the number of replicas. 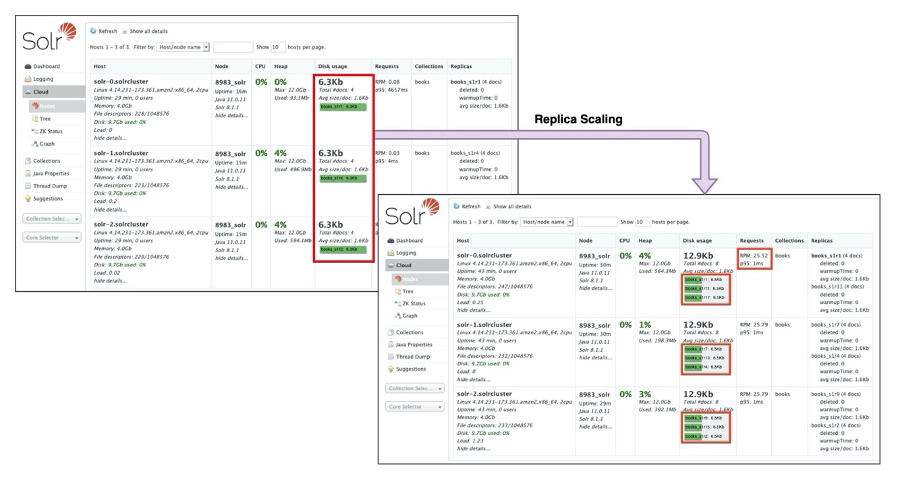 When additional SolrCloud pods added by the HPA could not be scheduled on any existing Amazon EKS managed node group’s worker nodes, the Cluster Autoscaler scales the cluster by adding additional worker nodes (Amazon EC2 compute).

Follow the detailed step-by-step instructions provided in our GitHub repository to clean up and avoid incurring future charges.

In this post, we discussed how customers can use Amazon Elastic Kubernetes Service (Amazon EKS) to deploy a performant, highly available, and fault tolerant Apache Solr deployment. We also walked through how customers can control scaling at different levels to meet the demands of their organization’s enterprise search capabilities. The deployment architecture is extensible and can be customized for various use cases.