In this post, we walk you through scenarios that use AWS Firewall Manager to centrally manage security groups across your AWS Organizations implementation. Firewall Manager is a security management tool that helps you centralize, configure, and maintain AWS WAF rules, AWS Shield Advanced protections, and Amazon Virtual Private Cloud (Amazon VPC) security groups across AWS Organizations.

A multi-account strategy provides the highest level of resource isolation, and helps you to efficiently track costs and avoid running into any API limits. Creating a separate account for each project, business unit, and development stage also enforces logical separation of your resources.

As organizations innovate, developers are constantly updating applications and, in the process, setting up new resources. Managing security groups for new resources across multiple accounts becomes complex as the organization grows. To enable developers to have control over the configuration of their own applications, you can use Firewall Manager to automate the auditing and management of VPC security groups across multiple Amazon Web Services (AWS) accounts.

Firewall Manager enables you to create security group policies and automatically implement them. You can do this across your entire organization, or limit it to specified accounts and organizational units (OU). Also, Firewall Manager lets you use AWS Config to identify and review resources that don’t comply with the security group policy. You can choose to view the accounts and resources that are out of compliance without taking corrective action, or to automatically remediate noncompliant resources.

Let’s consider an example where you’re running an ecommerce website. You’ve decided to use Organizations to centrally manage billing and several aspects of access, compliance, security, and sharing resources across AWS accounts. As shown in the following figure, AWS accounts that belong to the same team are grouped into OUs. In this example, the organization has a foundational OU, and multiple business OUs—ecommerce, digital marketing, and product. 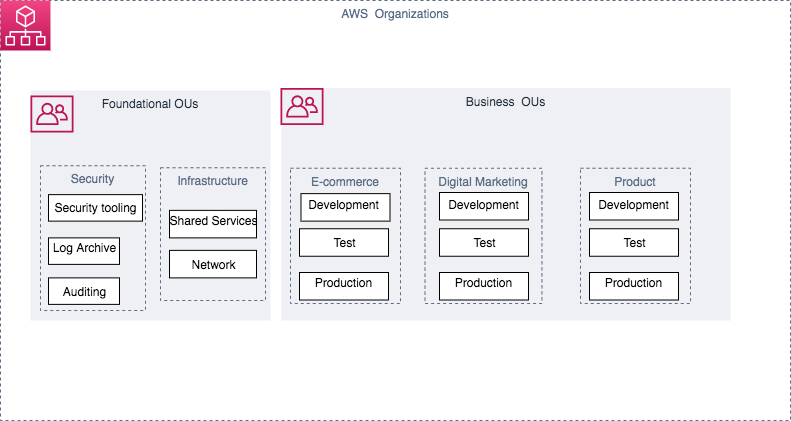 The product teams are responsible for configuring and maintaining the AWS environment according to the guidance from the security team. An intrusion detection system (IDS) has been set up to monitor infrastructure for security activity. The IDS architecture requires that an agent be installed on instances across multiple accounts. The IDS agent running on the Amazon Elastic Compute Cloud (Amazon EC2) instances protects their infrastructure from common security issues. The agent collects telemetry data used for analysis, and communicates with the central IDS instance that sits in the AWS security account. The central IDS instance analyzes the telemetry data and notifies the administrators with its findings.

For the host-based agent to communicate with the central system correctly, each Amazon EC2 instance must have specific inbound and outbound ports and specific destinations defined as allowed. To enable our product to focus on their applications, we want to use automation to ensure that the right network configuration is implemented so that instances can communicate with the central IDS. 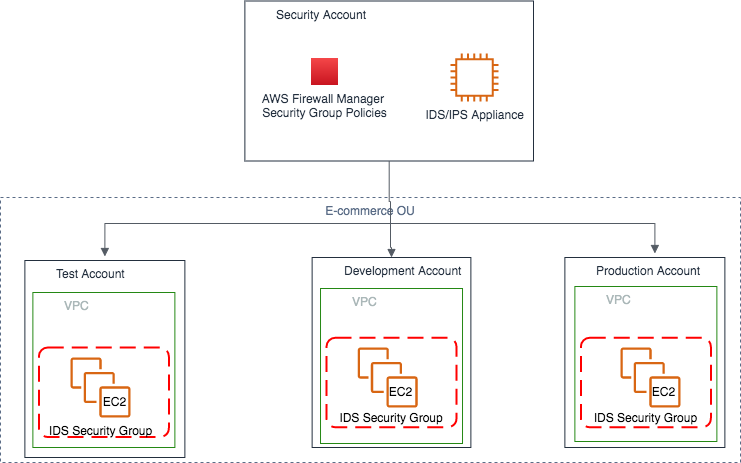 As shown in figure 3, with Firewall Manager you can quickly view the compliance status for each policy by looking at how many accounts are included in the scope of the policy and how many out of those are compliant or non-compliant. Firewall Manager is also integrated with AWS Security Hub, which can trigger security automation based on findings. 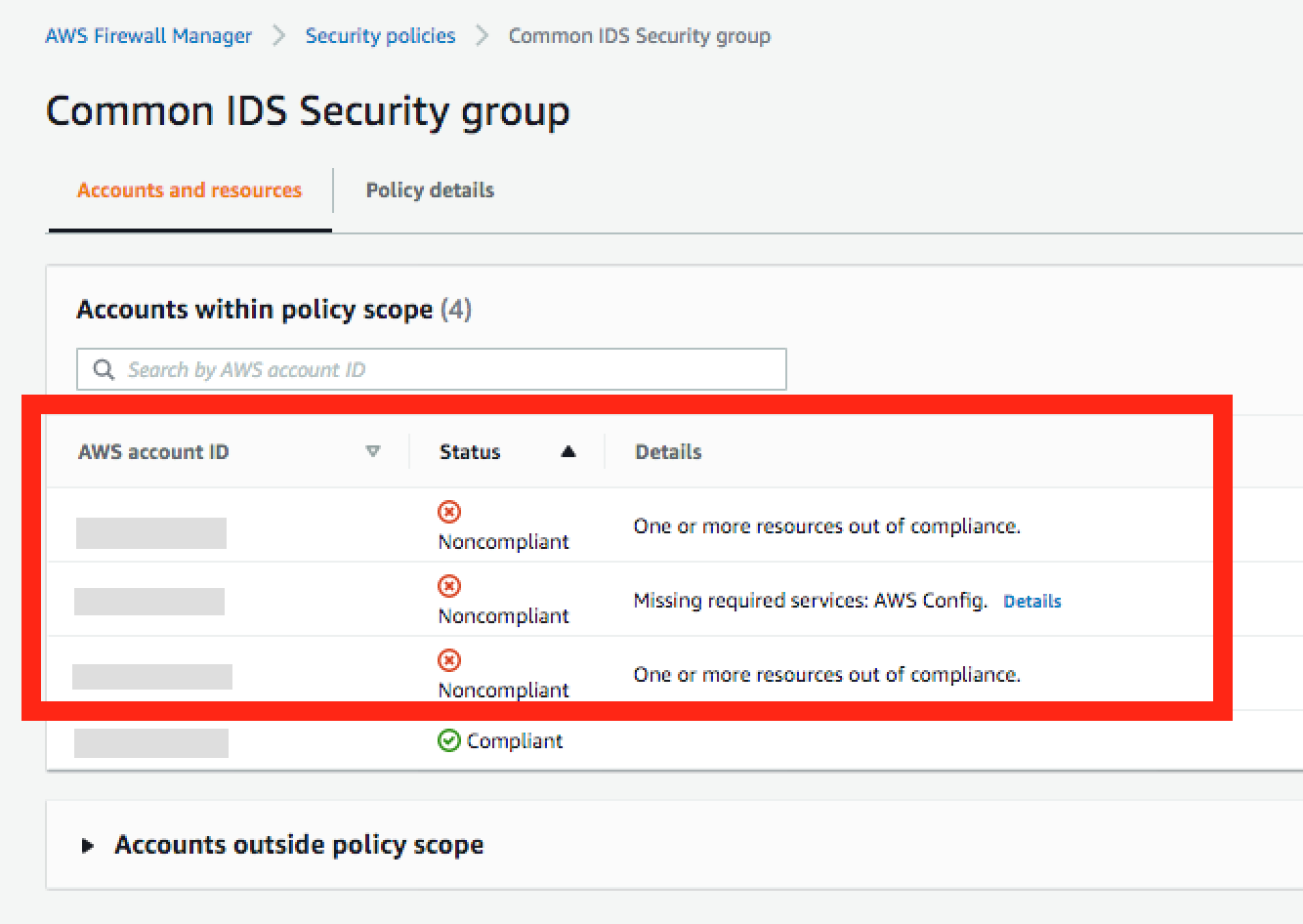 You can use Firewall Manager content audit security group policy to provide auditing and enforcement of your organization’s security policy for risky security groups, most commonly known as allowed or blocked security group rules. This enables you to set guardrails and monitor for overly permissive rules centrally. For example, we set an allow list policy to allow secure shell access only from authorized IP addresses on the corporate network.

In the policy scope, you can choose the AWS accounts this policy applies to, the resource type, and which resource to include based on the resource tags, as shown in figure 5. 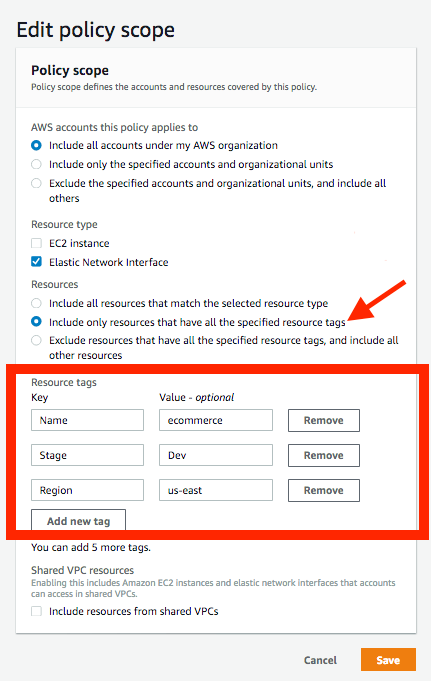 This post shares a few core use cases that enable security practitioners to build the capability to centrally manage security groups across AWS Organizations. Developers can focus on building applications, while the audit and configuration of network controls is automated by Firewall Manager. The key use cases we discussed are: