Amazon Web Services (AWS) recently released Code Signing for AWS Lambda. By using this feature, you can help enforce the integrity of your code artifacts and make sure that only trusted developers can deploy code to your AWS Lambda functions. Today, let’s review a basic use case along with best practices for lambda code signing. Then, let’s dive deep and talk about two advanced patterns—one for centralized signing and one for cross account layer validation. You can use these advanced patterns to use code signing in a distributed ownership model, where you have separate groups for developers writing code and for groups responsible for enforcing specific signing profiles or for publishing layers.

For context of what this capability gives you, let’s look at the secure software development lifecycle (SDLC). You need different kinds of security controls for each of your development phases. An overview of the secure SDLC development stages—code, build, test, deploy, and monitor—, along with applicable security controls, can be found in Figure 1. You can use code signing for Lambda to protect the deployment stage and give a cryptographically strong hash verification.

Figure 2 shows the basic pattern described in Code signing for AWS Lambda and in the documentation. The basic code signing pattern uses AWS Signer on a ZIP file and calls a create API to install the signed artifact in Lambda.

The basic pattern illustrated in Figure 2 is as follows:

Code signing for Lambda provides four signature checks. First, the integrity check confirms that the deployment artifact hasn’t been modified after it was signed using AWS Signer. Lambda performs this check by matching the hash of the artifact with the hash from the signature. The second check is the source mismatch check, which detects if a signature isn’t present or if the artifact is signed by a signing profile that isn’t specified in the CSC. The third, expiry check, will fail if a signature is past its point of expiration. The fourth is the revocation check, which is used to see if anyone has explicitly marked the signing profile used for signing or the signing job as invalid by revoking it.

The integrity check must succeed or Lambda will not run the artifact. The other three checks can be configured to either block invocation or generate a warning. These checks are performed in order until one check fails or all checks succeed. As a security leader concerned about the security of code deployments, you can use the Lambda code signing checks to satisfy different security assurances:

The last three checks are enforced only if you have set the signature validation policy—UntrustedArtifactOnDeployment parameter—in the CSC to ENFORCE. If the policy is set to WARN, then failures in any of the mismatch, expiry, and revocation checks will log a metric called a signature validation error in Amazon CloudWatch. The best practice for this setting is to initially set the policy to WARN. Then, you can monitor the warnings, if any, and update the policy to enforce when you’re confident in the findings in CloudWatch.

To create a signing profile, you’ll use the AWS Command Line Interface (AWS CLI). Start by logging in to your account as the central security role. This is an administrative role that is scoped with permissions needed for setting up code signing. You’ll create a signing profile to use for an application named ABC. These example commands are written with prepopulated values for things like profile names, IDs, and descriptions. Change those as appropriate for your application.

To create a signing profile

You also want to make a CSCwith the signing profile that you, as the security administrator, want all your developers to use.

To create a CSC

Run this command, replacing <signing-profile-version-arn> with the output from Step 1 of the preceding procedure—Create a signing profile:

Running this command will give you a CSCARN that will look something like arn:aws:lambda:sa-east-1:XXXXXXXXXXXX:code-signing-config:approved-csc-XXXXXXXXXXXXXXXXX. Make a note of this value to use later.

Now that the security administrators team has created this CSC, how do they ensure that all the developers use it? Administrators can use IAM to grant access to the CreateFunction API, while using the new lambda:CodeSigningConfig condition key with the CSC ARN you created. This will ensure that developers can create functions only if code signing is enabled.

This IAM policy will allow the developer roles to create Lambda functions, but only when they are using the approved CSC. The additional clauses Deny the developers from creating their own signing profiles or CSCs, so that they are forced to use the ones provided by the central team.

Run the following command. Replace <code-signing-config-arn> with the CSC ARN you created previously.

To create a signed Lambda function

So far, you have the tools to sign your own Lambda code so that no one can tamper with it, and you’ve reviewed a pattern where one team creates and owns the signing profiles to be used by different developers. Let’s look at one more advanced pattern where you publish code as a signed Lambda layer in one account, and you then use it in a Lambda function in a separate account. A Lambda layer is an archive containing additional code that you can include in a function.

For this, let’s consider how to set up code signing when you’re using layers across two accounts. Layers allow you to use libraries in your function without needing to include them in your deployment package. It’s also possible to publish a layer in one account, and have a different account consume that layer. Let’s act as a publisher of a layer. In this use case, you want to use code signing so that consumers of your layer can have the security assurance that no one has tampered with the layer. Note that if you enable code signing to verify signatures on a layer, Lambda will also verify the signatures on the function code. Therefore, all of your deployment artifacts must be signed, using a profile listed in the CSC attached to the function. 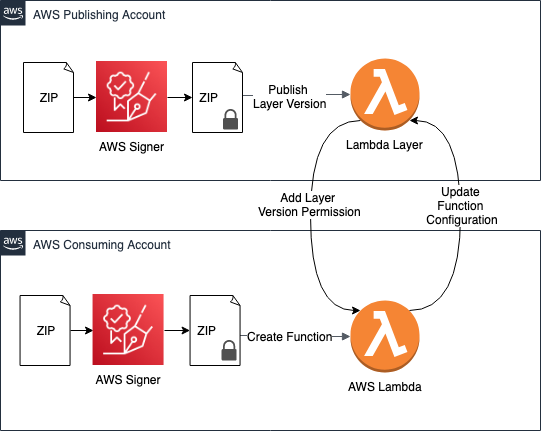 Here are the steps to build this setup. You’ll be logging in to two different accounts, your publishing account and your consuming account.

Running this command will give you a profile version ARN. Make a note of the value returned to use in a later step.

To make a publisher signing profile

Next, you want to sign your layer code with this signing profile. For this example, use the blank layer code from this GitHub project. You can make your own layer by creating a ZIP file with all your code files included in a directory supported by your Lambda runtime. AWS Lambda layers has instructions for creating your own layer.

You can then sign your layer code using the signing profile.

Now publish the resulting, signed layer. Note that the layers themselves don’t have signature validation on deployment. However, the signatures will be checked when they’re added to a function.

To publish your signed layer

This command will return information about your newly published layer. Search for the LayerVersionArn and make a note of it for use later.

For the last step in the publisher account, you must grant read access to the layer using the add-layer-version-permission command. In the following command, you’re granting access to an individual account using the principal parameter.

(Optional) You could instead choose to grant access to all accounts in your organization by using “*” as the principal and adding the organization-id parameter.

To create a CSC

When creating the function that uses the signed layer, you can pass in the CSC that you created. Lambda will check the signature on the function code in this step.

To create a Lambda function

Lambda will check the signature on the layer code in this step. If the signature of any deployed layer artifact is corrupt, the Lambda function stops you from attaching the layer and deploying your code. This is true regardless of the mode you choose—WARN or ENFORCE. If you have multiple layers to add to your function, you must sign all layers invoked in a Lambda function.

This capability allows layer publishers to share signed layers. A publisher can sign all layers using a specific signing profile and ask all the layer consumers to use that signing profile as one of the allowed profiles in their CSCs. When someone uses the layer, they can trust that the layer comes from that publisher and hasn’t been tampered with.