Docker enables you to package, ship, and run applications as containers. This approach provides a comprehensive abstraction layer that allows developers to “containerize” or “package” any application and have it run on any infrastructure. Docker containers are analogous to shipping containers in that they provide a standard and consistent way of shipping almost anything.

One of the challenges when deploying production applications using Docker containers is deciding how to handle run-time configuration and secrets. Secrets are anything to which you want to tightly control access, such as API keys, passwords, and certificates. Injecting secrets into containers via environment variables in the Docker run command or Amazon EC2 Container Service (ECS) task definition are the most common methods of secret injection. However, those methods may not provide the desired level of security because environment variables can be shared with any linked container, read by any process running on the same Amazon EC2 instance, and preserved in intermediate layers of an image and visible via the Docker inspect command or ECS API call. You could also bake secrets into the container image, but someone could still access the secrets via the Docker build cache.

In this blog post, I will show you how to store secrets on Amazon S3, and use AWS Identity and Access Management (IAM) roles to grant access to those stored secrets using an example WordPress application deployed as a Docker image using ECS. Using IAM roles means that developers and operations staff do not have the credentials to access secrets. Only the application and staff who are responsible for managing the secrets can access them. The deployment model for ECS ensures that tasks are run on dedicated EC2 instances for the same AWS account and are not shared between customers, which gives sufficient isolation between different container environments.

In order to store secrets safely on S3, you need to set up either an S3 bucket or an IAM policy to ensure that only the required principals have access to those secrets. You could create IAM users and distribute the AWS access and secret keys to the EC2 instance; however, it is a challenge to distribute the keys securely to the instance, especially in a cloud environment when instances are regularly spun up and spun down by Auto Scaling groups. This is where IAM roles for EC2 come into play: they allow you to make secure AWS API calls from an instance without having to worry about distributing keys to the instance.

Instead of creating and distributing the AWS credentials to the instance, do the following:

In order to secure access to secrets, it is a good practice to implement a layered defense approach that combines multiple mitigating security controls to protect sensitive data. Though you can define S3 access in IAM role policies, you can implement an additional layer of security in the form of an Amazon Virtual Private Cloud (VPC) S3 endpoint to ensure that only resources running in a specific Amazon VPC can reach the S3 bucket contents. Amazon VPC S3 endpoints enable you to create a private connection between your Amazon VPC and S3 without requiring access over the Internet, through a network address translation (NAT) device, a VPN connection, or AWS Direct Connect.

The walkthrough: How to create a WordPress application on ECS that uses S3 to store database credentials

The rest of this blog post will show you how to set up and deploy an example WordPress application on ECS, and use Amazon Relational Database Service (RDS) as the database and S3 to store the database credentials. The following diagram shows this solution.

The standard way to pass in the database credentials to the ECS task is via an environment variable in the ECS task definition. Because many operators could have access to the database credentials, I will show how to store the credentials in an S3 secrets bucket instead. This S3 bucket is configured to allow only read access to files from instances and tasks launched in a particular VPC, which enforces the encryption of the secrets at rest and in flight. 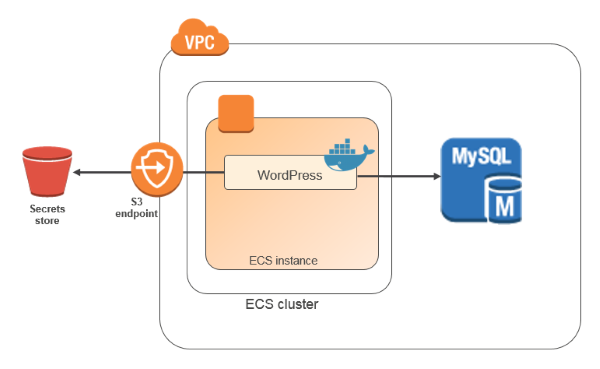 For this walkthrough, I will assume that you have:

You will need to run the commands in this walkthrough on a computer with Docker installed (minimum version 1.9.1) and with the latest version of the AWS CLI installed. You will use the US East (N. Virginia) Region (us-east-1) to run the sample application. If you are using a Windows computer, ensure that you run all the CLI commands in a Windows PowerShell session.

How to create the WordPress application

In this section, I will explain the steps needed to set up the example WordPress application using S3 to store the RDS MySQL Database credentials. I will launch an AWS CloudFormation template to create the base AWS resources and then show the steps to create the S3 bucket to store credentials and set the appropriate S3 bucket policy to ensure the secrets are encrypted at rest and in flight—and that the secrets can only be accessed from a specific Amazon VPC. Finally, I will build the Docker container image and publish it to ECR.

First, create the base resources needed for the example WordPress application:

Step 2: Add a policy to the S3 secrets bucket

The bucket that will store the secrets was created from the CloudFormation stack in Step 1. To obtain the S3 bucket name run the following AWS CLI command on your local computer.

Add a bucket policy to the newly created bucket to ensure that all secrets are uploaded to the bucket using server-side encryption and that all of the S3 commands are encrypted in flight using HTTPS. Create a new file on your local computer called policy.json with the following policy statement. Be sure to replace SECRETS_BUCKET_NAME with the name of the bucket created earlier.

Now add this new JSON file with the policy statement to the S3 bucket by running the following AWS CLI command on your local computer. This command extracts the S3 bucket name from the value of the CloudFormation stack output parameter named SecretsStoreBucket and passes it into the S3 PutBucketPolicy API call.

Upload this database credentials file to S3 with the following command. This command extracts the S3 bucket name from the value of the CloudFormation stack output parameter named SecretsStoreBucket and passes it into the S3 copy command and enables the server-side encryption on upload option.

Step 4: Create the S3 VPC endpoint to restrict access to the S3 bucket from the Amazon VPC

Now that you have uploaded the credentials file to the S3 bucket, you can lock down access to the S3 bucket so that all PUT, GET, and DELETE operations can only happen from the Amazon VPC. Accomplish this access restriction by creating an S3 VPC endpoint and adding a new condition to the S3 bucket policy that enforces operations to come from this endpoint.

The command to create the S3 VPC endpoint follows. This command extracts the VPC and route table identifiers from the CloudFormation stack output parameters named VPC and RouteTable, and passes them into the EC2 CreateVpcEndpoint API call.

You should see output from the command that is similar to the following.

Take note of the value of the output parameter, VpcEndpointId. You will need this value when updating the S3 bucket policy.

Now that you have created the VPC endpoint, you need to update the S3 bucket policy to ensure S3 PUT, GET, and DELETE commands can only occur from within the VPC. Open the file named policy.json that you created earlier and add the following statement. Be sure to replace SECRETS_BUCKET_NAME with the name of the S3 bucket created by CloudFormation, and replace VPC_ENDPOINT with the name of the VPC endpoint you created earlier in this step.

Now, you will push the new policy to the S3 bucket by rerunning the same command as earlier.

Because you have sufficiently locked down the S3 secrets bucket so that the secrets can only be read from instances running in the Amazon VPC, you now can build and deploy the example WordPress application.

Step 5: Build the Docker image and publish it to ECR

The example application you will launch is based on the official WordPress Docker image. In the official WordPress Docker image, the database credentials are passed via environment variables, which you would need to include in the ECS task definition parameters. This is not a safe way to handle these credentials because any operations person who can query the ECS APIs can read these values.

Instead, what you will do is create a wrapper startup script that will read the database credential file stored in S3 and load the credentials into the container’s environment variables. This is safer because neither querying the ECS APIs nor running Docker inspect commands will allow the credentials to be read. You will publish the new WordPress Docker image to ECR, which is a fully managed Docker container registry that makes it easy for you to store, manage, and deploy Docker container images.

Now, you must change the official WordPress Docker image to include a new entry-point script called secrets-entrypoint.sh. This script obtains the S3 credentials before calling the standard WordPress entry-point script. Note that you do not save the credentials information to disk—it is saved only into an environment variable in memory.

To create the new entry-point script:

Now, you will launch the ECS WordPress service based on the Docker image that you pushed to ECR in the previous step. The service will launch in the ECS cluster that you created with the CloudFormation template in Step 1.

You now have a working WordPress application using a locked-down S3 bucket to store encrypted RDS MySQL Database credentials, rather than having them exposed in the ECS task definition environment variables.

You could also control the encryption of secrets stored on S3 by using server-side encryption with AWS Key Management Service (KMS) managed keys (SSE-KMS). With SSE-KMS, you can leverage the KMS-managed encryption service that enables you to easily encrypt your data. By using KMS you also have an audit log of all the Encrypt and Decrypt operations performed on the secrets stored in the S3 bucket. For more information about using KMS-SSE, see Protecting Data Using Server-Side Encryption with AWS KMS–Managed Keys (SSE-KMS).

In the post, I have explained how you can use S3 to store your sensitive secrets information, such as database credentials, API keys, and certificates for your ECS-based application. I have also shown how to reduce access by using IAM roles for EC2 to allow access to the ECS tasks and services and enforcing encryption in flight and at rest via S3 bucket policies. I have added extra security controls to the secrets bucket by creating an S3 VPC endpoint to allow only the services running in a specific Amazon VPC access to the S3 bucket. This is advantageous because querying the ECS task definition environment variables, running Docker inspect commands, or exposing Docker image layers or caches can no longer obtain the secrets information.

If you have comments about this post, submit them in the “Comments” section below. If you have questions about this blog post, please start a new thread on the EC2 forum.