The importance of a mentor in your cloud learning journey

***Please take a few minutes to share your thoughts about the AWS Training and Certification Blog. Your feedback helps us continue create content you value.***

Editor’s note: This blog shares the journey of an AWS re/Start graduate and his mentor. Having a mentor to guide you through your cloud learning journey and sharing best practices can greatly impact the rate at which you build knowledge and can inspire your continued education. Read on to learn more about the path that led them to the cloud and each other, and dive into their key learnings.

Tal Hibner is a Senior DevOps Infrastructure Engineer, based in Tel Aviv, Israel. Marwan Wasel is located in the north of Israel, in Haifa, and is a DevOps Engineer at MoovingON. Marwan landed his job after graduating from Amazon Web Services (AWS) re/Start, a full-time skills development program that prepares those with varying degrees of tech knowledge for a career in cloud computing. In April 2022, while Marwan was in the AWS re/Start program, Tal became his mentor, and through their AWS Cloud learning journey, they have forged a professional and personal bond. 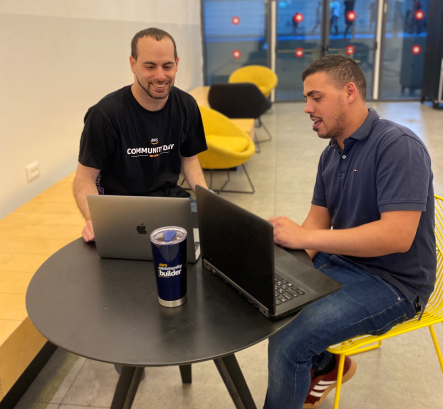 Tal was an established software developer when a manager at his then-employer encouraged him to add cloud skills to his repertoire and pursue AWS Certifications. Tal earned three AWS Certifications in 1.5 years, joined the Israel AWS User Group as a volunteer Community Leader, and earned recognition as a member of the AWS Community Builders program.

Despite Tal’s very rare genetic metabolic disorder called hypophosphatasia resulting in disability and chronic pain, he made it look like everything was possible and was willing to share his experience and skills with other AWS learners. Through his community volunteering efforts, Tal connected with Appleseeds, an AWS re/Start collaborating organization, to become a mentor to its learners. It was there that Tal became Marwan’s mentor.

Before joining AWS re/Start, Marwan had prior experience with web development, but was looking for a way to build strong expertise in a technology field. When he came across an ad promoting AWS re/Start at Appleseeds, he signed up hoping to gain practical cloud knowledge and skills.

“Friends spoke about AWS and I was intrigued. I wanted to move to the next level, use more modern tools, and get involved in the way development connects with the operations in real-time,” he says. “That led me to AWS re/Start and eventually to a DevOps role.”

The value of mentorship

The AWS re/Start workforce development program training at Appleseeds, and Tal’s mentorship, proved to be the spark that changed Marwan’s career path and led Marwan directly to a new job.

Through regular monthly coaching sessions with Tal, Marwan received practical tips and learned about additional AWS resources helping deepen his knowledge and address real-life challenges (see the resources listed at the end of the blog).

Marwan remarks, “In addition to technical learning, we’ve talked about the industry, companies, jobs and salaries. Tal helped me negotiate for myself. His mentorship has opened my eyes to what it takes to be a successful DevOps engineer. Of course, what you bring to the process yourself—your own mental preparation—is still the key.”

Tal is energized by the opportunity to mentor Marwan and others. “I’ve been on both sides of this, as both a learner and a mentor,” Tal says. “Learning from AWS and earning my AWS Certifications has made a big difference in my career and proficiency. Back in 2016, my competencies were narrowed down to writing Java code for on-prem software and owning the CI/CD pipelines. Each certification and continued learning opened up new opportunities and helped me find the career path that fulfilled me.”

“I became a mentor because I was willing to give back. I help other learners believe in themselves and achieve what may seem impossible or inaccessible. Mentorship allows me to support people from underserved communities in Israel to start their career in the cloud, regardless their age, color, disability, gender, race, religion, or veteran status. I believe it makes me feel like a better person.”

A bright path ahead

Tal has plans to continue mentoring. “I’d like to do more with Appleseeds, and I’m hoping I can encourage more people to explore all the avenues of mutual support to achieve more with AWS.”

Meanwhile, Marwan is charging straight ahead. “I’m learning something new each day,” he says. “Some days you’re building. Some days you’re solving problems. I find the rhythm really rewarding. I want to keep taking what I learn and applying it in my role.”

For those who may doubt their ability to succeed in cloud, Marwan shares, “Even if you feel you don’t have the right background, even if you’ve never touched scripts or coding, AWS re/Start and a mentor can deliver the learning and guidance you need to get started.”

Both Tal and Marwan hope people will be inspired by their mentor/mentee relationship. “Explore what AWS re/Start has to offer,” says Tal, “Sometimes the unknown is frightening, but if you’re starting out today, you have more available to you than I did when I was in your place. And I hope I’ll meet you along the way.”

AWS Education Programs are preparing graduates for cloud roles in cities and towns around the world. We designed our curriculum by working backwards from employer requirements, ensuring that graduates are qualified and prepared with the skills needed. If you’re interested in participating in or hiring from AWS Education Programs, you can learn more about Amazon’s workforce programs for the public and our commitment to provide free cloud skills training to 29 million people around the world by 2025.