In an earlier Using Over-the-Air Updates with AWS IoT Device Management blog post, we showed you how to create a simple AWS IoT snapshot job and track its progress. In this post, we will show you step-by-step how to configure and create an AWS IoT continuous job. A continuous job is a long running job that reacts to changes to your deployment targets by automatically deploying job executions. For example, a continuous job can be deployed to an initial group of 100 devices. When new devices are added to your deployment group, those new devices will automatically be notified about the continuous job.

A continuous job is useful when:

First, we are going to create three thing groups, each with a different firmware version (V1, V2, V3).

In this example, the device is registered with thing name MyRaspberryPi. Add MyRaspberryPi to thing group FirmwareV1Group.

We are going to write a Lambda function that is triggered whenever a device is successfully updated from firmware version V1 to V2. This Lambda function does the following:

First, navigate to the IAM console to create a role, LambdaRoleForV1ToV2FirmwareUpdate, with the following policy. Replace AWS_REGION with your AWS region and <AWS_ACCOUNT_ID> with your AWS account ID.

Navigate to the AWS Lambda console. On the Create function page, select Blueprints. Under Blueprints, choose hello-world, and then choose Configure. 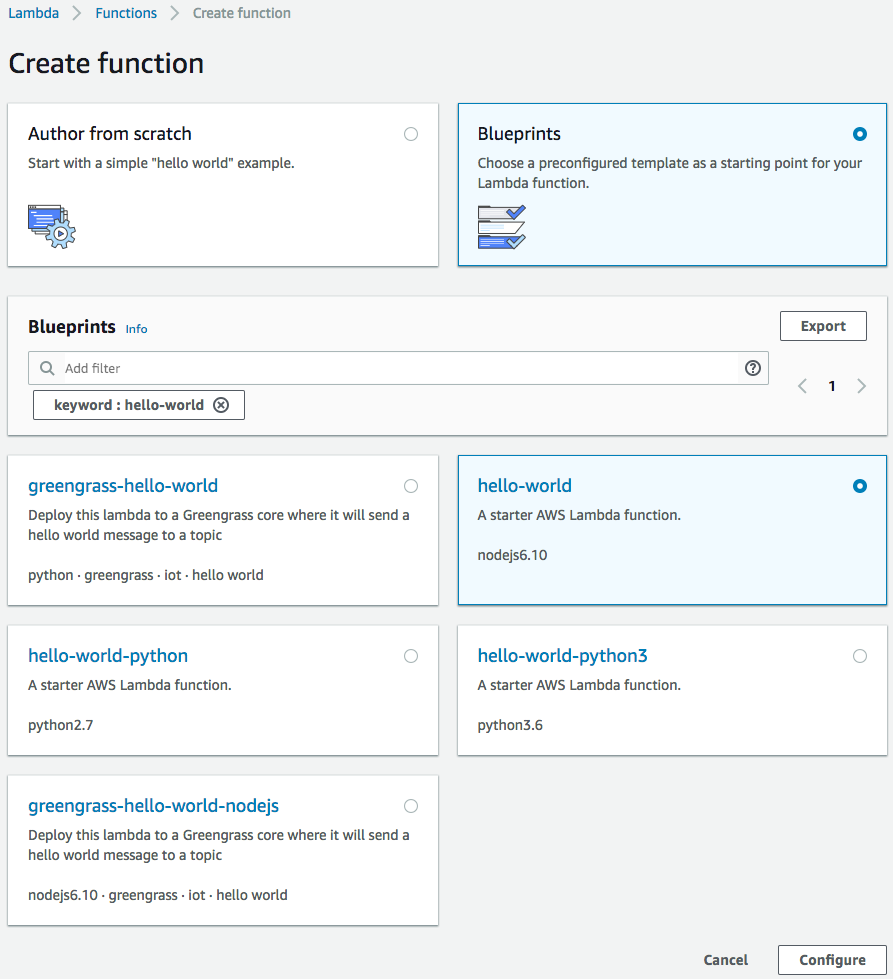 Under Basic information, type a name for this Lambda function. For Role, choose the role you created in the previous step (LambdaRoleForV1ToV2FirmwareUpdate), and then choose Create function. 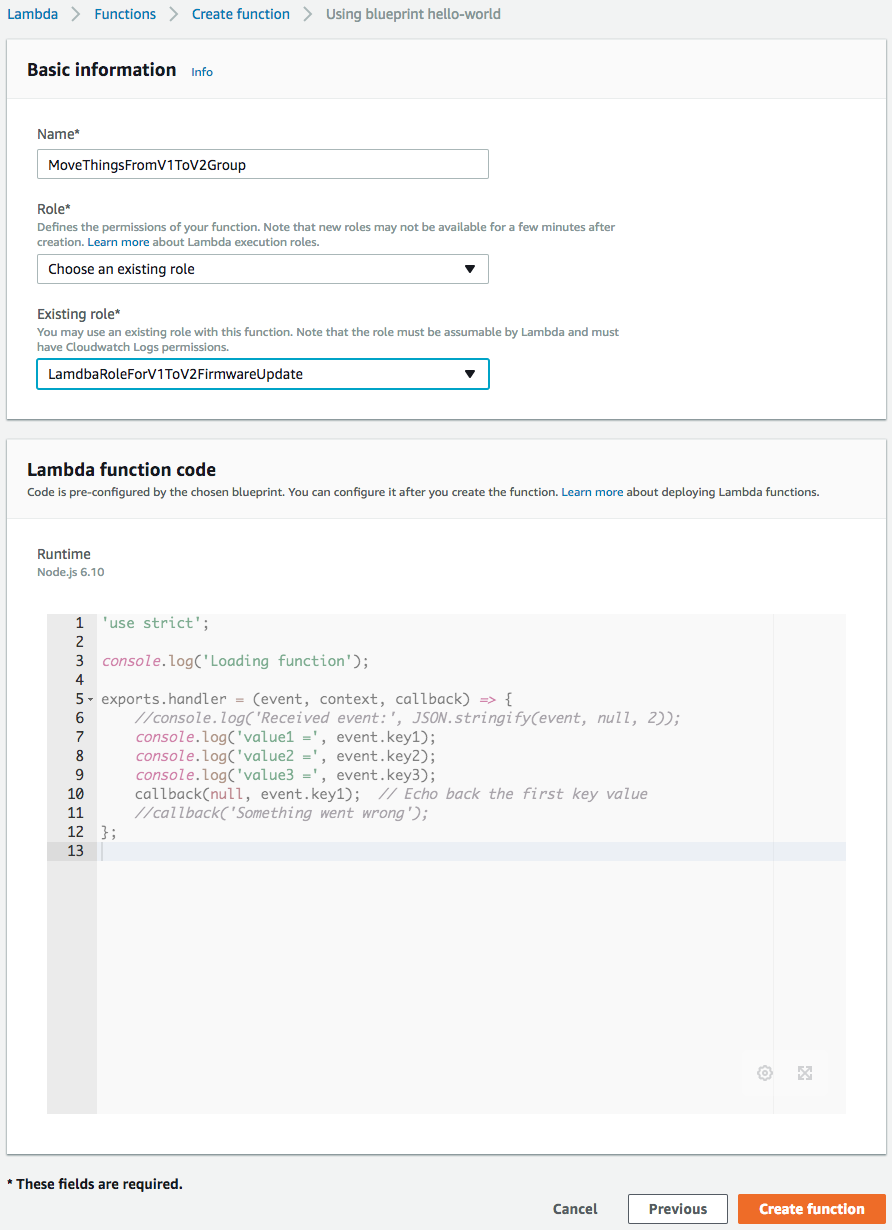 On the next page, update the function code with the following code snippet, and then choose Save.

To configure the trigger for this Lambda function, under Designer, choose AWS IoT. In the Configure triggers section, we will create a custom IoT rule to filter succeeded job executions events for a continuous job with the job ID continuous-job-V1-to-V2. To learn more about Job Events, see Job Events documentation in the AWS IoT Developer Guide. Create a new rule named “SucceededJobExecutionsForV1toV2Update”, and input the following SQL statement for the Rule query statement: 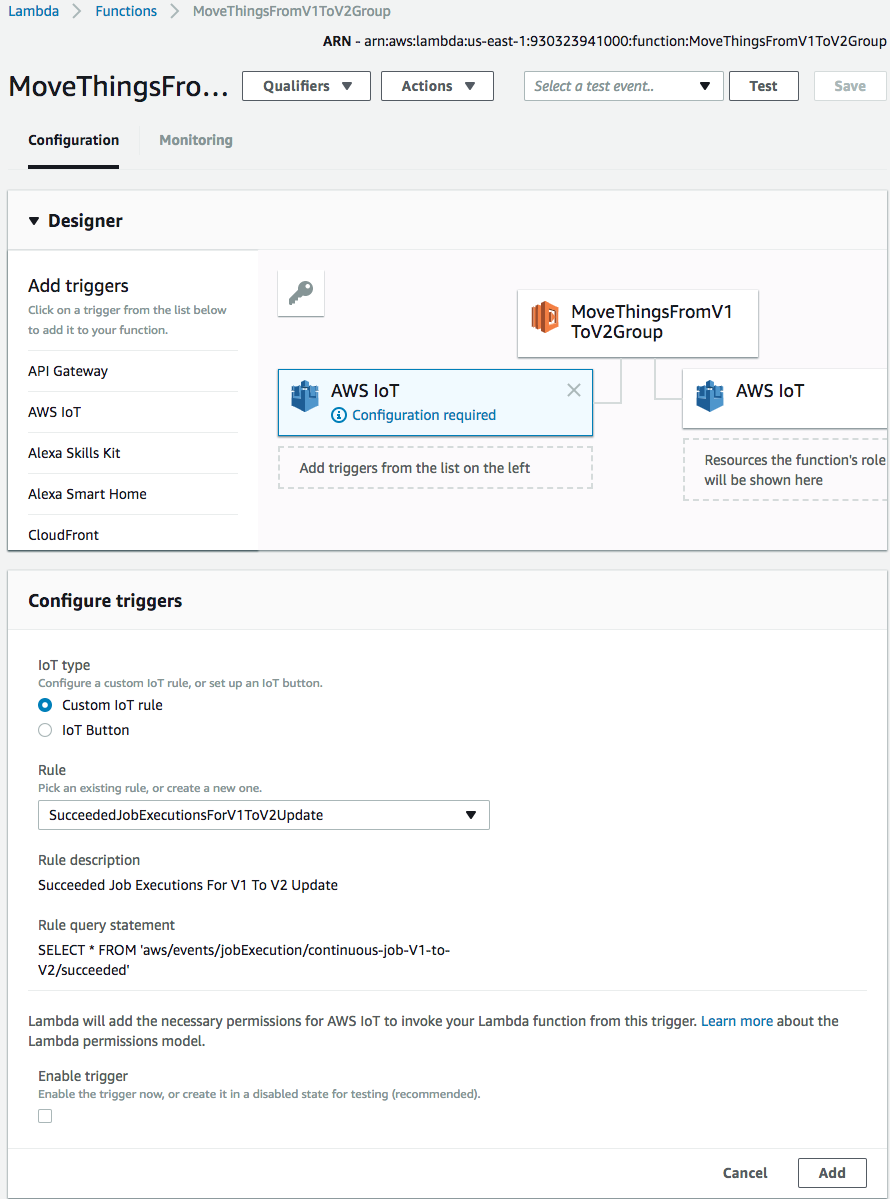 To test the Lambda function, configure a test event in the AWS Lambda console. From Select a test event, choose Configure test events.

After you have created the test event, you are directed back to the AWS Lambda console. Select the SucceededJobExecution test event, and choose Test. You should see the thing MyRaspberryPi is removed from FirmwareV1Group and add to FirmwareV2Group from AWS IoT console. For information about creating a Lambda function and how to monitor and debug a Lambda function with CloudWatch, see Create a Simple Lambda Function in the AWS Lambda Developer Guide.

We’ve walked through how to create a continuous job on deployment group FirmwareV1Group to update the firmware version on devices from V1 to V2. We’ve shown how to remove the device from FirmwareV1Group and add it to FirmwareV2Group after the device has successfully executed the job. So how about updating V2 devices to V3?

To bring device firmware up to date, you can create another continuous job, continuous-job-V2-to-V3, on the FirmwareV2Group deployment group, and configure a similar Lambda function to remove a device from FirmwareV2Group and add it to FirmwareV3Group.