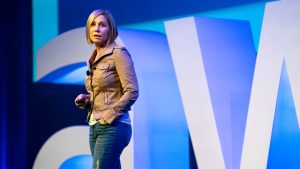 At the AWS Public Sector Summit in Canberra, Australia, more than 1,300 technologists convened to learn about digital transformation through cloud technologies, and were able to get inspired, dive deep, and begin to build. Keynote speakers highlighted the impact AWS can have on the individual, society, security, government, and the economy in the Australia and New Zealand region.

Read on for what you missed at the AWS Public Sector Summit Canberra:

The Australian Government Digital Transformation Agency, an agency committed to providing simple, clear, and fast public services, entered into a whole of government agreement with AWS. This agreement will allow government entities throughout the country access to AWS services through simplified procurement – changing the paradigm of government procurement. From day one, government entities can save costs through pre-negotiated terms and conditions. Learn more on the Australian Government Digital Transformation Agency website.

We are excited to announce plans to extend AWS Educate program to Australian veterans, to help prepare them for a future career in cloud. The program will be available in 2020 to Australian-based veterans.

Recent research by AWS and Deloitte Access Economics revealed the biggest barrier to cloud adoption in Australia was ensuring workers had the correct skills to enable digital transformation, with 37% of businesses surveyed noting this as their top challenge. By helping unlock the country’s veteran talent base through the AWS Educate program, we are helping prepare the next generation of IT and cloud professionals, and help build Australia’s talent pipeline.

Co-founder of The Ripper Group International, Dr. Paul Scully-Power, discussed SharkSpotter©, the world’s first real-time artificial intelligent shark detection system for unmanned aerial vehicles, powered by AWS. Using drones, the SharkSpotter program detects sharks in the ocean and sends alerts to the beach or control centre to warn of danger. Using AWS, The Ripper Group was also able to reduce latency from 10 seconds to less than one second, make SharkSpotter an app accessible on a smartphone, as well as scale the SharkSpotter-as-a-Service to be available worldwide – helping save lives and keep swimmers out of danger. The company is currently working on CrocSpotter©.

Read more about The Ripper Group and SharkSpotter.

During the keynote address, Head of Product Management at nonprofit Thorn, Kristin Boorse, shared how they’re using AWS to achieve their mission to defend children from sexual abuse online and end child trafficking. With AWS, Thorn is able to find victims faster, with shorter investigations – cutting investigation time by as much as 65% – saving 10,000 victims in 55 countries.