As organizations move their workloads to the cloud, audit logs provide a wealth of information on the operations, governance, and security of assets and resources. As the complexity of the workloads increases, so does the volume of audit logs being generated. It becomes increasingly difficult for organizations to analyze and understand what is happening in their accounts without a significant investment of time and resources.

AWS CloudTrail and Amazon Athena help make it easier by combining the detailed CloudTrail log files with the power of the Athena SQL engine to easily find, analyze, and respond to changes and activities in an AWS account.

Amazon Athena uses Apache Hive’s data definition language (DDL) to create tables and Presto, a distributed SQL engine, to run queries. Apache Hive does not natively support files in JSON, so we’ll have to use a SerDe to help Hive understand how the records should be processed. A SerDe interface is a combination of a serializer and deserializer. A deserializer helps take data and convert it into a Java object while the serializer helps convert the Java object into a usable representation.

In this blog post, we will walk through how to set up and use the recently released Amazon Athena CloudTrail SerDe to query CloudTrail log files for EC2 security group modifications, console sign-in activity, and operational account activity. This post assumes that customers already have AWS CloudTrail configured. For more information about configuring CloudTrail, see Getting Started with AWS CloudTrail in the AWS CloudTrail User Guide.

Let’s start by signing in to the Amazon Athena console and performing the following steps. 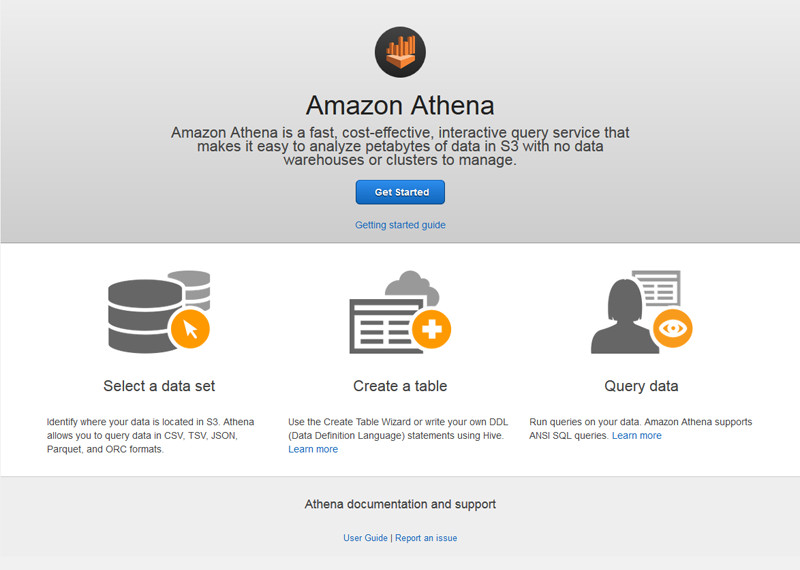 Create a table in the default sampledb database using the CloudTrail SerDe. The easiest way to create the table is to copy and paste the following query into the Athena query editor, modify the LOCATION value, and then run the query.

with the S3 bucket where your CloudTrail log files are delivered. For example, if your CloudTrail S3 bucket is named “aws -sai-sriparasa” and you set up a log file prefix of  “/datalake/cloudtrail/” you would edit the LOCATION statement as follows:

After the query has been executed, a new table named cloudtrail_logs will be added to Athena with the following table properties. 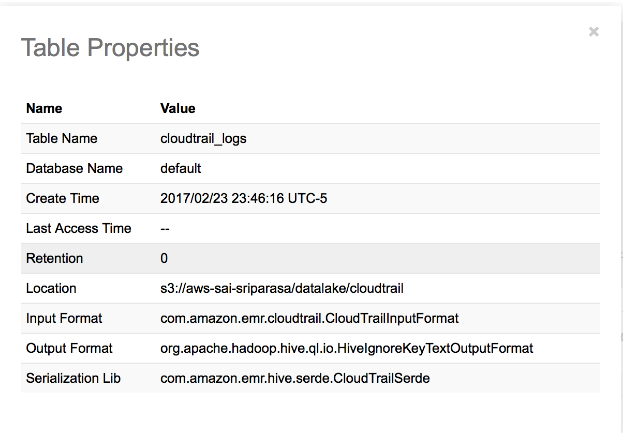 Athena charges you by the amount of data scanned per query.  You can save on costs and get better performance when querying CloudTrail log files by partitioning the data to the time ranges you are interested in.  For more information on pricing, see Athena pricing.  To better understand how to partition data for use in Athena, see Analyzing Data in S3 using Amazon Athena.

These use cases focus on:

When reviewing an operational issue or security incident for an EC2 instance, the ability to see any associated security group change is a vital part of the analysis.

The following query can help us dive deep into the security group analysis. We’ll configure the query to filter for our network interface ID, security groups, and a time range starting 12 hours before the alarm occurred so we’re aware of recent changes. (CloudTrail log files use the ISO 8601 data elements and interchange format for date and time representation.)

Identify any security group changes for our EC2 instance:

This query returned the following results:

The results show that the ModifyNetworkInterfaceAttribute and AuthorizedSecurityGroupIngress API calls may have impacted the EC2 instance. The first call was initiated by user bobodell and set two security groups to the EC2 instance. The second call, also initiated by user bobodell,  was made approximately 33 minutes later, and successfully opened TCP port 143 (IMAP) up to the world (cidrip:0.0.0.0/0).

Although these changes may have been authorized, these details can be used to piece together a timeline of activity leading up to the alarm.

Whether it’s to help meet a compliance standard such as PCI, adhering to a best practice security framework such as NIST, or just wanting to better understand who is accessing your assets, auditing your login activity is vital.

The following query can help identify the AWS Management Console logins that occurred over a 24-hour period. It returns details such as user name, IP address, time of day, whether the login was from a mobile console version, and whether multi-factor authentication was used.

An important part of running workloads in AWS is understanding recurring errors, how administrators and employees are interacting with your workloads, and who or what is using root privileges in your account.

Recurring error messages can be a sign of an incorrectly configured policy, the wrong permissions applied to an application, or an unknown change in your workloads. The following query shows the top 10 errors that have occurred from the start of the year.

The following query shows the top IAM users and activities by eventname from the beginning of the year.

The results will show the total activities initiated by each IAM user and the eventname for those activities.

Like the Console sign-in activity query in the previous section, this query could be modified to filter the activity to view only events that occurred outside of the known network or after hours.

Another useful query is to understand how the root account and credentials are being used and which activities are being performed by root.

The following query will look at the top events initiated by root from the beginning of the year. It will show whether these were direct root activities or whether they were invoked by an AWS service (and, if so, which one) to perform an activity.

AWS CloudTrail and Amazon Athena are a powerful combination that can help organizations better understand the operations, governance, and security of assets and resources in their AWS accounts without a significant investment of time and resources.

Sai Sriparasa is a consultant with AWS Professional Services. He works with our customers to provide strategic and tactical big data solutions with an emphasis on automation, operations & security on AWS. In his spare time, he follows sports and current affairs.

Bob O’Dell is a Sr. Product Manager for AWS CloudTrail. AWS CloudTrail is a service that enables governance, compliance, operational auditing, and risk auditing of AWS accounts.  Bob enjoys working with customers to understand how CloudTrail can meet their needs and continue to be an integral part of their solutions going forward.  In his spare time, he enjoys spending time with HRB exploring the new world of yoga and adventuring through the Pacific Northwest.