Kubernetes platform teams want to automate their Amazon EKS environments configurations using an automated pipeline. Users also need a prescriptive way for managing and setting up GitOps-based delivery for the organization’s applications teams. Customers need the freedom and flexibility for their application teams to deploy and configure their applications, once they have been onboarded into the cluster.

Recently, we announced a new open source solution called EKS Blueprints that helps you operate Amazon Elastic Kubernetes Service (Amazon EKS) more easily.  EKS Blueprints is a set of Infrastructure as Code (IaC) modules that help you to deploy and configure Amazon EKS clusters with a wide range of add-ons, across accounts and Regions. As part of the EKS Blueprints project, we also provide a EKS Blueprints Patterns repository that contains a collection of patterns that can be used as specific reference architectures.

In this post we show you how to use multi-environment GitOps pipeline pattern and achieve the following:

This pattern is a ready-to-use starting point for customers that manage multiple clusters across environments with GitOps based delivery for applications.

Let’s start by defining the key components of the solution.

To demonstrate how multiple applications can be managed by multiple teams with their own deployment lifecycle and configurations using GitOps, we use the applications that are commonly used in the eksworkshop.com and ecsworkshop.com which are: ecsdemo-frontend, ecsdemo-nodejs, and ecsdemo-crystal.

EKS Blueprints supports two types of teams: a Platform team whose members are clusters administrators and an Application team that manage workloads running in the cluster. You can find more details in the official documentation.

We create four teams in this solution: three application teams ecsdemo-frontend, ecsdemo-backend, and ecsdemo-nodejs and one platform team.

EKS Blueprints provides a way for multiple application teams to share an Amazon EKS cluster, isolated by namespaces. Each application team gets its own Kubernetes namespace with quotas defining resources that applications deployed in these namespaces are allowed to consume.

There are five GitHub repositories participating in this solution:

This pattern is using the AWS CDK Pipeline module, which is needed for setting up an automated continuous delivery pipeline that’s responsible for deploying and updating the Amazon EKS cluster and configurations.

The following diagram shows the high-level architecture of the deployment: 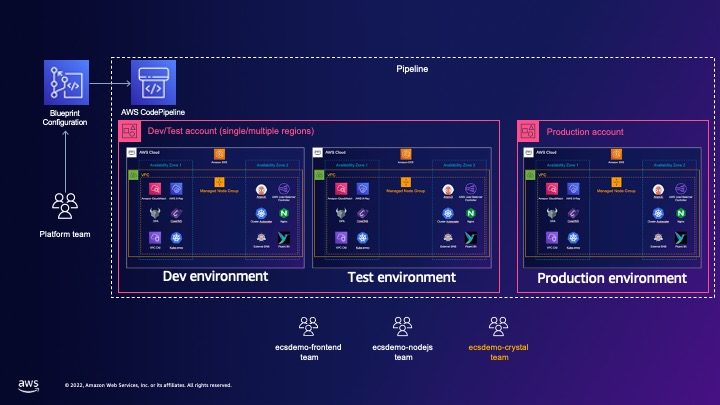 We provision the three Amazon EKS clusters. Each is deployed to its own environment called: dev, test, and prod. The clusters are configured with EKS Blueprints, and are automatically deployed using the Git repository, which is a triggered-based pipeline that’s created using the blueprint. 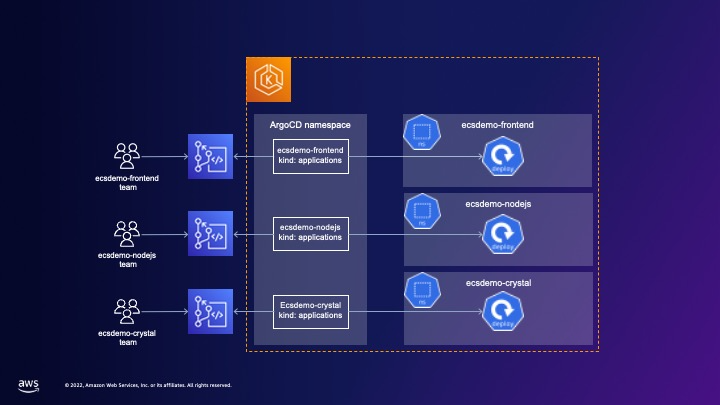 For the GitOps based delivery, each cluster is deployed with the ArgoCD add-on that bootstraps itself to use another repository that holds the ArgoCD configuration. This configuration uses the ArgoCD App of Apps pattern.

wThis pattern is a basic helm chart, which instead of deploying actual applications manifests (Kubernetes Service, Deployment, ConfigMap, etc.), deploys a custom ArgoCD resource called Application. This resource is a Custom Resource Definition (CRD) created as part of the ArgoCD add-on deployment. The Application object specifies the target repository that holds the application configuration, as well as other deployment configurations, such as the path of the Helm chart within the repository, custom Helm values files, target revision, and more. For more information, please refer to ArgoCD documentation that describe the Application CRD. You can think of this pattern as a collection of pointers to the applications deployed into the cluster.

If you want to deploy the solution immediately, then you can skip this section and go directly to the Deployment Walkthrough section.

Let’s open the lib/pipeline-multi-env-gitops/index.ts file and look closer at the code of the pattern.

The cluster blueprint is the basic object that describes the cluster configuration. It contains the following:

In the file that you’ve just opened, you can find the blueprint definition with all the configurations above using the blueprints.EksBlueprint.builder() method:

We want to create a continuous deployment pipeline for updating the Amazon EKS infrastructure upon push into GitHub repository. For that we have the following code block from in the same file. Replace the gitOwner variable value with your GitHub username.

Next, we show how teams are being managed. Open one of the team’s code configurations file (we are using ./lib/teams/pipeline-multi-env-gitops/team-backend-frontend.ts as an example).

As you can see, the FrontendTeam inherits from an ApplicationTeam. The ApplicationTeam class is responsible for some of the following configurations:

This samples uses the following IAM users that should be defined in the target AWS accounts: frontend-user, nodejs-user, crystal-user, and platform-user. Those users can assume the different IAM roles that the blueprint creates. The Deployment Walkthrough section, has a step to create those IAM users.

This sample also provides a proposed configuration for the ArgoCD add-on deployed in the cluster. The configuration can be found in the ./lib/pipeline-multi-env-gitops/index.ts file. The function called createArgoAddonConfig is used in order boilerplate repeatable code, which allows for easy onboarding of new teams and applications. Inside that function, there are two major code blocks:

The second code block is the one that configures the ArgoCD addon. It consists of three configurations:

1. Provide administrative permissions through a standard AWS credentials provider chain. You can do it by attaching an IAM role with a corresponding policy or configuring an IAM user through aws configure By default, the Region and account of the user or role defined here will be used as a target account and region for deployment for all three environments. If you would like to deploy any of the three environments to another account or Region, then you can edit the Region and account environment properties in ./bin/main.ts file. If you would like to deploy less environments because of cost, service quotas, or any other reason, then you can comment out the test environment in the previous file.

2. Fork the patterns repository on GitHub and clone it.

3. Open the lib/pipeline-multi-env-gitops/index.ts file and modify the gitOwne const to be your GitHub user name as part of the CodePipelineStack.builder() method:

4. Commit and push your changes.

5. Create Personal Access token on GitHub with these scopes:

6. Store the value of the Personal Access token in a new secret as plain text with name github-token (lowercase) in AWS Secrets Manager. The secret should be defined in one main Region, and replicated to all target regions you are planning to deploy to. This token is used by AWS CodePipeline in a web-hook authentication for its source repository.

7. Create and upload an SSH key to GitHub (follow instructions on sections Generating a new SSH Key, and Adding your SSH key to the ssh-agent, and finally Adding a new SSH key to your GitHub account). The SSH key is used by ArgoCD as an authentication mechanism to GitHub private repositories. For more information, please refer to the EKS Blueprints documentation.

8. Store a new secret with name github-ssh-key in AWS Secrets Manager and replicate it on all Regions where you plan to deploy your clusters. The default configuration of this sample deploys all clusters in the same Region. If you are not changing those defaults, then you can store the secret in a single Region. The secret should contain two Key names of sshPrivateKey and url. For convenience, we created a script that generates a JSON structure output for the SSH private key. The script can be found here. You need to set the PEM_FILE (full path to the ssh private key file) and URL_TEMPLATE (part of the URL for credentials template) variables inside the script. After running the script, copy the entire JSON output as plaintext to AWS Secrets Manager, and it handles it as JSON object. The expected output of this script should look like this:

9. Install dependencies from the cloned folder.

10. Run the following command to bootstrap the AWS CDK after replacing Account ID and Region.

Note: The main file of the pattern repository contains multiple patterns that can be used independently. If you’re seeing errors relates to other patterns (e.g., Error: datadog-api-key secret must be setup for the DatadogConstruct pattern to work), you can safely ignore them, if the bootstrap was successful with an output similar to:

11. Create the relevant users for the different teams, as described in the previous section Managing Teams:

12. Next, deploy the blueprint’s pipeline by running the following command. Reply yes to any prompt. This step creates the AWS CodePipeline pipeline that contains all the steps that are needed to deploy the EKS Blueprints to three different environments:

13. Once the deployment of the pipeline is finished open the CloudFormation Console and find the newly created eks-blueprint-pipeline-stack. In the Resources tab, find an IAM Role starting with eksblueprintpipelinePipelineBuildeksblueprintpipelinesynthCdkBuildProjectRole and copy its physical name.

Note: The pipeline fails when running on the first time, because of the missing permissions you have to add in the next step. Please retry running the pipeline again after attaching the policy to the IAM role as described in the following step. This manual operation is planned to be automatically fixed. You can track this fix by following this issue in the solutions GitHub repository.

14. Navigate to the IAM Console, find the role described in the previous step, and create an inline policy with the following permissions (name it eks-blueprints-pipeline-policy:

Once the blueprint deployed, you can look at the progress of your deployment called eks-blueprint-pipeline in the AWS CodePipeline Console. 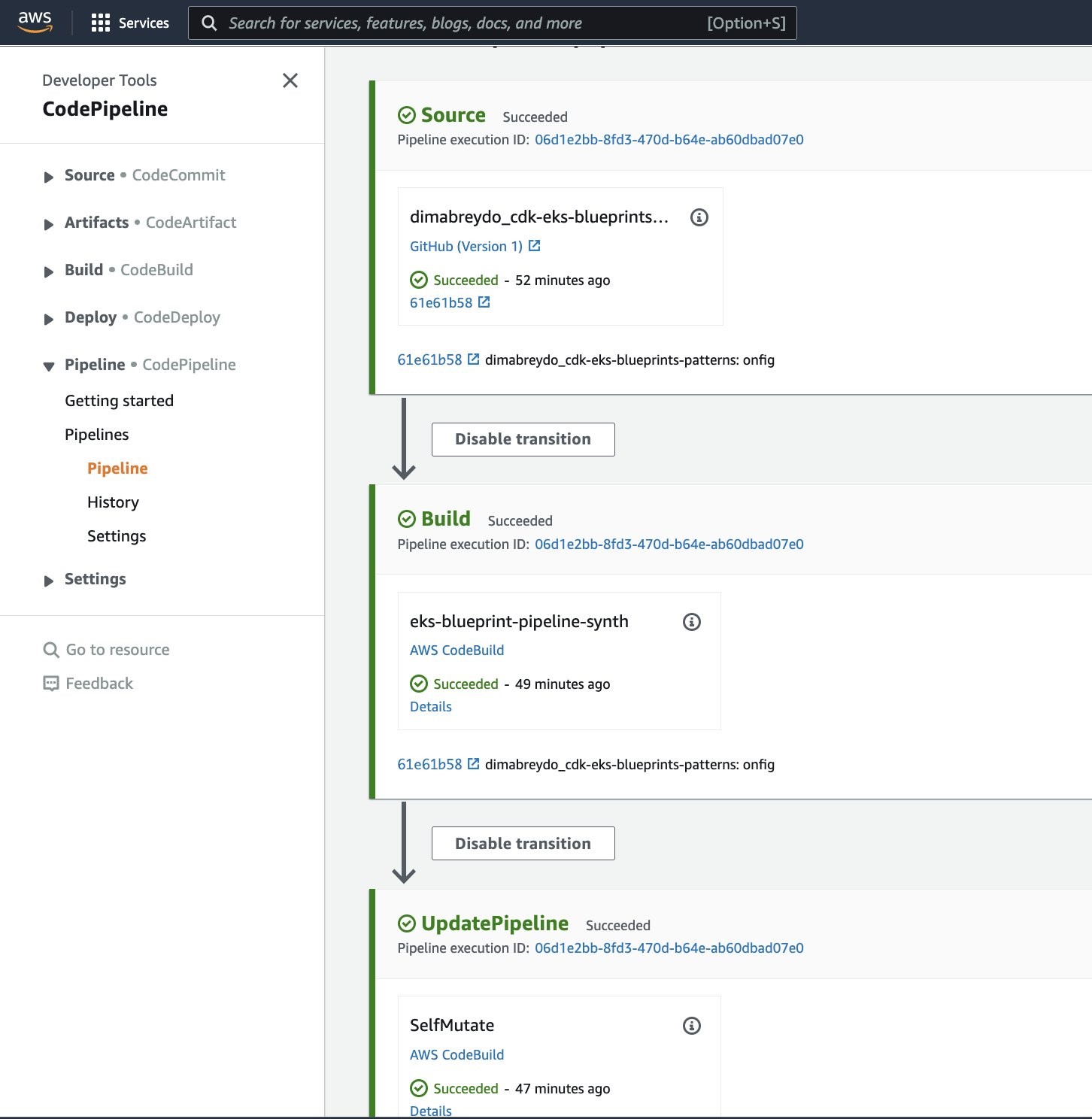 The pipeline includes the following steps:

You can test cluster access using the aws eks update-kubeconfig command that is in the output of every AWS CloudFormation stack of every environment. For example, open the outputs of the dev-eu-west-1-dev-eu-west-1-blueprint and copy the output that starts with deveuwest1blueprintConfigCommand. Run this command from your working station:

After running this command, you should be able to access the cluster.

First, test the frontend service by port-forward it to your local host with the following command:

Open your browser of choice at http://localhost:8080. The output of the application should look like this:

Next, we would like to explore the ArgoCD configuration we covered previous with the sing port-forward and forward the ArgoCD service. First, get its initial admin password from the cluster by running the following:

Open your browser at http://localhost:8080, and log in with admin as username and the password returned from the above command. If you’re having issues accessing the ArgoCD console using kubectl port-forward, then you can edit the ArgoCD Kubernetes Service called blueprints-addon-argocd-server and modify the value of the type attribute from ClusterIP to LoadBalancer. Next, select the applications and select bootstrap-apps. Here you can see the App of Apps defining the deployed applications:

In the main Applications screen: In addition to the bootstrap-apps it contains the three applications that we deployed. Pushing a change to the corresponding repository will trigger a redeployment of that service. 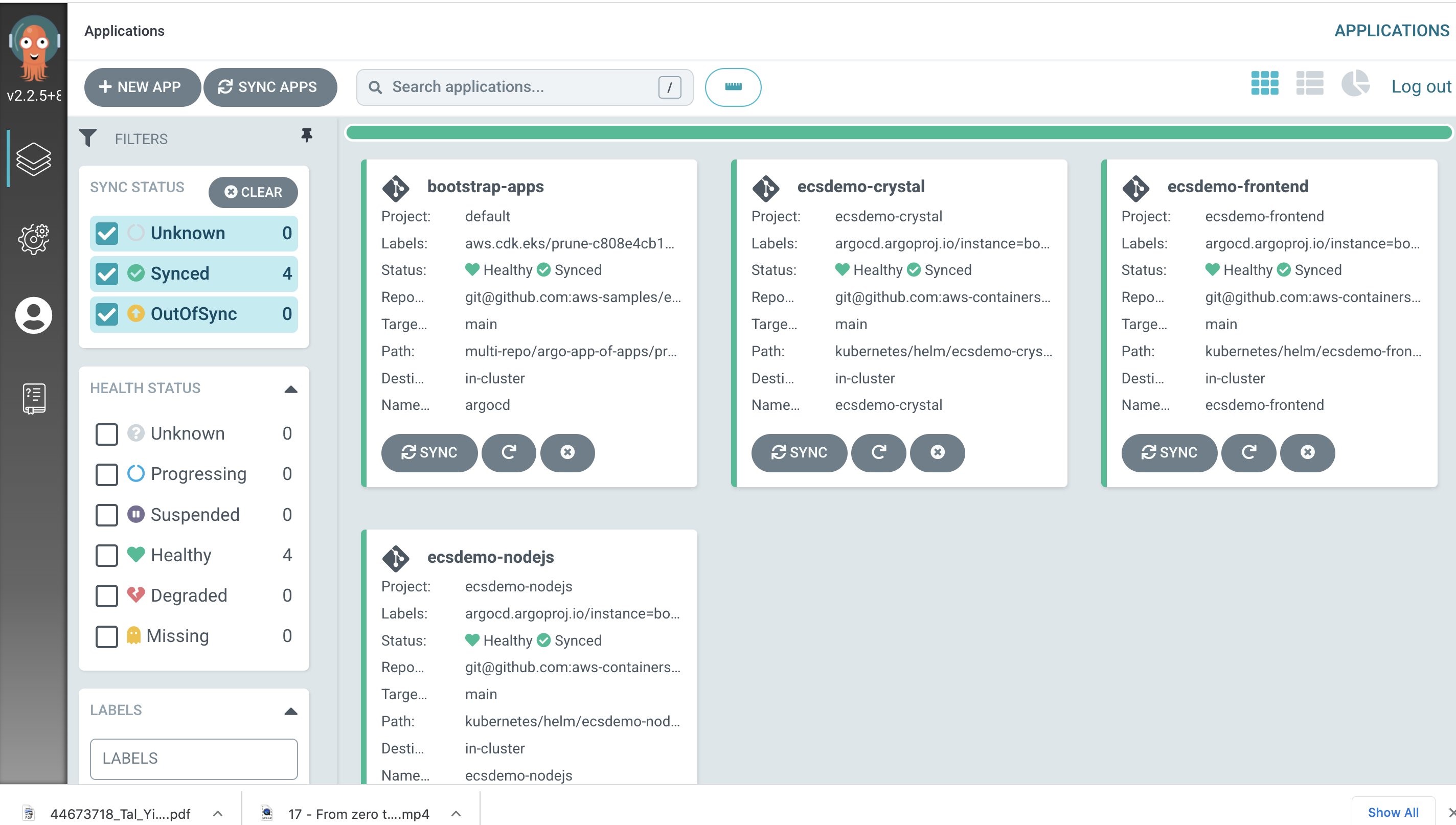 We leave it to you to try modifying any part of the bootstrap-apps helm chart. This is where you can do any of the following:

In this post, we showed how you can use pipeline-multi-env-gitops pattern of the EKS Blueprints solution to support multi-team and multi-repositories configuration, with a continuous deployment pipeline for the Amazon EKS infrastructure, team management, application onboarding, and Gitops delivery pipeline for the applications.

This pattern is a ready-to-use starting point for Amazon EKS customers that manage multiple clusters across environments with GitOps based delivery for applications.