VPC Traffic Mirroring is an AWS feature used to copy network traffic from the elastic network interface of an EC2 instance to a target for analysis. This makes a variety of network-based monitoring and analytics solutions possible on AWS. By capturing the raw packet data required for content inspection, VPC Traffic Mirroring enables agentless methods for acquiring network traffic from/to Amazon Elastic Compute Cloud (EC2) instances. This is used in network security, network performance monitoring, customer experience management, and network troubleshooting. In this blog, we will highlight some recent enhancements, key use cases, deployment models, and automation tips for VPC Traffic Mirroring.

Network and network security engineers view traffic as the ‘source of truth’ because it provides a real-time view into communications between different entities in the infrastructure. VPC Traffic Mirroring enables network and security engineers to solve four major categories of use cases: 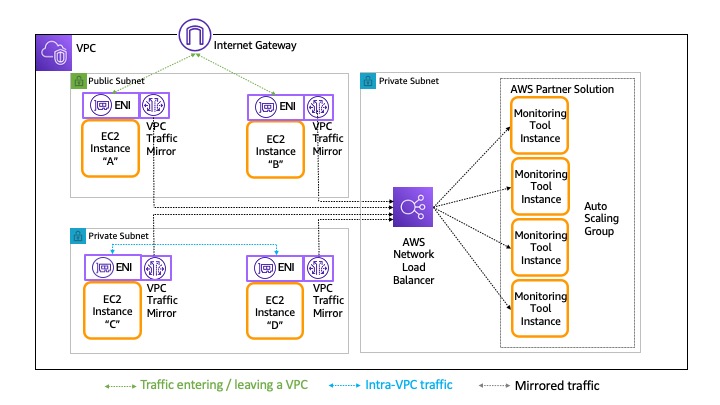 We hear from many customers that they must deploy multiple use cases simultaneously. In such a scenario, you may need to deploy multiple virtual monitoring appliances, and more than one appliance may need to inspect network traffic from the same source. That can be done by creating multiple VPC Traffic Mirroring sessions, but that approach can be administratively more complex to manage. In these situations, VPC Traffic Mirroring can be combined with a third-party cloud packet broker (for example, cPacket, Gigamon, NETSCOUT) to deploy multiple operational appliances in a fleet. This is shown in the following diagram (figure 2). Note that the cloud packet broker must be sized accordingly as it must process all mirrored traffic. The cloud packet broker may also perform advanced transformation functions (for example, TLS decryption, de-duplication etc.) before sending the right data to the right monitoring appliance. These optimizations are also valuable in conserving data transfer costs. 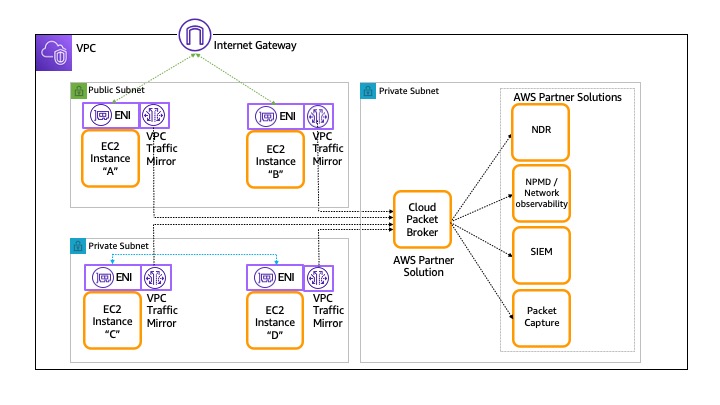 Many customers ask whether the deployment model should be distributed or centralized. In other words, should network-based tools be distributed closer to the workloads, or should the tools be centralized? The answer depends on the task at hand and the teams involved.

There are at least three situations where a distributed deployment model is preferred. 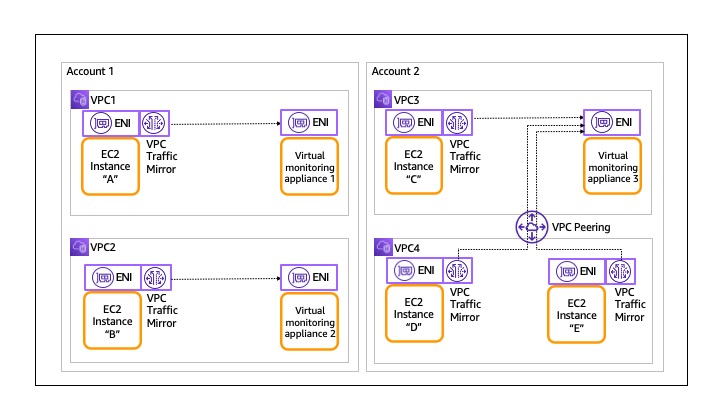 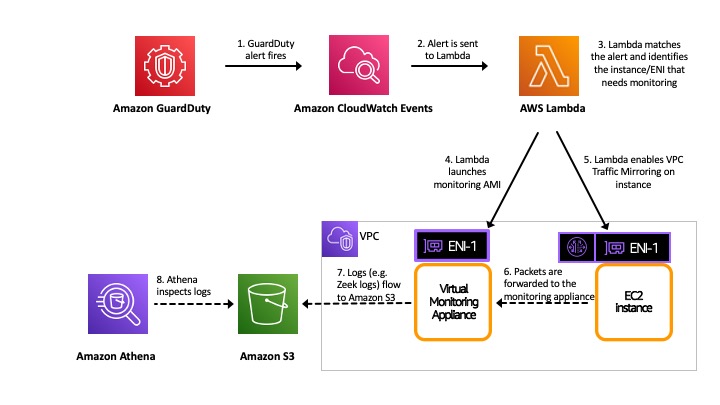 Organizations may have multiple owners when deploying a use case. For example, when one team is responsible for development and deployment of the application and another team is responsible for managing the operational health and/or security of the cloud infrastructure deployed. Another example is when an InfoSec team operating a Security Operations Center (SOC) is responsible for monitoring multiple accounts. This separation of responsibilities lends itself to a centralized monitoring architecture. In this architecture, shown in the following diagram (figure 5), virtual monitoring appliances are deployed to monitor traffic across multiple VPCs/accounts in the enterprise. However, app owners rarely, if ever, give the owner of a monitoring appliance permission to install agents on their workloads. App owners are more likely to provide the monitoring teams agentless access to network traffic. A centralized monitoring model is also a good option when monitoring a large amount of infrastructure. 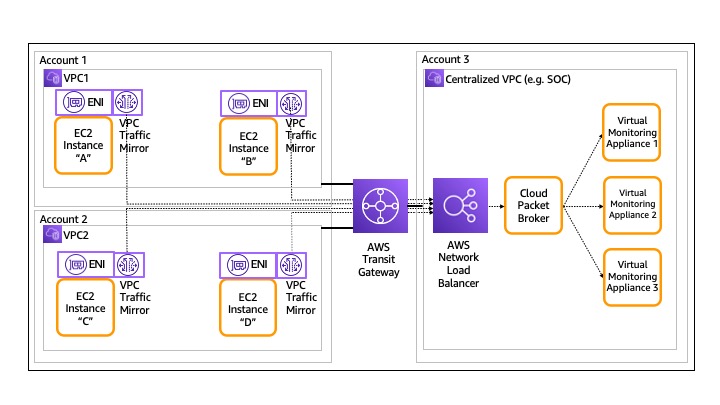 In a centralized deployment model, the target monitoring/security appliances must ingest and process data from multiple sources. Hence, we recommend using an NLB as a target with monitoring appliance instances behind it in an Auto Scaling group. Additionally, as discussed earlier, a cloud packet broker may be required if multiple types of monitoring appliances are used.

When considering a centralized model, it is important to estimate the data transfer costs (both inter-AZ and inter-Region), and perform a total cost of deployment analysis. This analysis is also useful in determining monitoring boundaries for the chosen deployment model.

VPC Traffic Mirroring currently operates at the elastic network interface of an EC2 compute instance. When the use cases we discussed earlier are implemented, administrators may need to enable traffic mirroring across all compute instances in a subnet. There are multiple ways to automate this process and implement a continuous monitoring strategy that detects new instances as they are spun up, and automatically adds them as sources for mirroring sessions. Security teams can use these automations to ensure the right coverage for their network security monitoring deployments in AWS. The following are two examples.

We have built a CloudFormation automation stack based on the AWS Serverless Application Model (AWS SAM) framework. This automation is used to quickly set up mirroring based on VPC, subnet, or input tags. Because VPC Traffic Mirroring is now supported on virtually all compute instances, this automation is handy when rapidly adding/deleting new traffic sources during troubleshooting. It is also helpful when you need to automatically mirror traffic as new instances are spun up, or as part of a scale-out policy in an Auto Scaling group. For details on how we did this, refer to this GitHub repository.

VPC Traffic Mirroring gives you deeper visibility into your AWS infrastructure. It does so by providing you with an agent-less method to acquire network traffic from/to Amazon Elastic Compute Cloud instances and sending it to a virtual monitoring/security appliance. This capability allows you to address use cases around network security, network performance monitoring, customer experience management, and network troubleshooting. We reviewed the basic operations of VPC Traffic Mirroring and how it can be deployed using distributed and centralized architecture models. In addition, customers can use VPC Traffic Mirroring with AWS Partner solutions to implement both continuous monitoring and on-demand monitoring strategies—and gain a deeper level of visibility into their VPCs and workloads.

Ananda is a Principal Go-To-Market Specialist for networking and network security at Amazon Web Services.