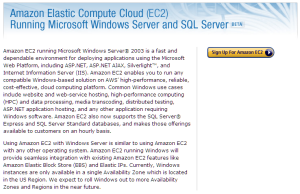 We’ve been working to make it possible for you to run Windows or SQL Server in additional locations and to build highly available applications.

The AWS Management Console has been updated with full support for the EU-West region. After selecting the new region from the handy dropdown (shown at right), you can launch EC2 instances, create, attach and destroy EBS volumes, manage Elastic IP addresses, and more.

We’ve created new Windows AMIs with the French, German, Italian, and Spanish language packages installed. The Console even provides a new Language menu in the quick start list. Once launched, you simply set the locale in the Windows Control Panel. You can find step by step directions for launching AMIs in various languages here.

The popular ElasticFox tool now lets you tag running instances, EBS volumes, and EBS snapshots. The Image and Instance views have been assigned to distinct tabs and you can now specify a binary (non-text) file as instance data at launch time.

While I’m talking about all things European, I should mention two other items that may be of interest to you. First, Amazon CTO Werner Vogels will deliver a keynote at the Cebit conference in Germany later this week. Second, we have an opening in Luxembourg for an AWS Sales Representative.