The Amazon Relational Database Service (RDS) now supports SQL Server 2012.You can now launch the Express, Web, and Standard Editions of this powerful database from the comfort of the AWS Management Console. SQL Server 2008 R2 is still available, as are multiple versions and editions of MySQL and Oracle Database.

If you are from the Microsoft world and haven’t heard of RDS, here’s the executive summary: You can run the latest and greatest offering from Microsoft in a fully managed environment. RDS will install and patch the database, make backups, and detect and recover from failures. It will also provide you with a point-and-click environment to make it easy for you to scale your compute resources up and down as needed.

Read the SQL Server What’s New documentation to learn more about these and other features.

Launch Now
You can launch SQL Server 2012 from the AWS Management Console. First you select the edition that best meets your needs: 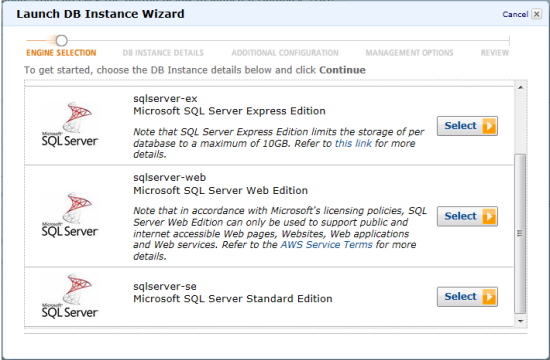 Then you fill in the details (SQL Server 2012 is version 11), and your DB Instance will be launched in a matter of minutes: 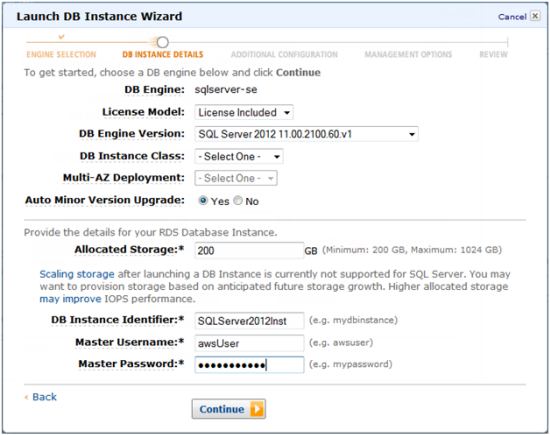 Yes, This is Cool!
You can now get started with SQL Server 2012 without having to invest in hardware or buying a license. If you are eligible for the AWS Free Usage Tier,  you can get started without spending a penny. You can launch a DB Instance, evaluate the product, do a trial migration of your data, and learn all about the new features at minimal cost. When the time comes to move your organization to SQL Server 2012, you’ll already have experience using it in a real-world environment. That certainly can’t hurt your career.