Atulya Beheray of the AWS Messaging Team has written a guest post to introduce a new paper that his team has put together to show you how to use the Simple Queue Service in highly scalable fashion. 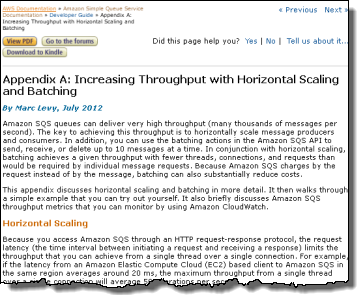 A new section of the SQS documentation presents simple samples demonstrating SQS performance with examples for both the base API (single operations), and the batch API.

Help Wanted
The Amazon Web Services Messaging team is growing and we are looking to add new members who are passionate about building large scale distributed systems.  If you are a solid software development engineer, quality assurance engineer,  or engineering manager/leader, we would like to hear from you.  We are moving fast, so send your resume to aws-messaging-jobs@amazon.com and will interview the most promising candidates immediately.