Running Kubernetes on AWS requires an understanding of both AWS networking configuration and Kubernetes networking requirements. When you use the default Amazon Elastic Kubernetes Service (Amazon EKS) AWS CloudFormation templates to deploy your Amazon Virtual Private Cloud (Amazon VPC) and Amazon EC2 worker nodes, everything typically just works. But small issues in your configuration can result in frustrating errors.

In this blog, we’ll review the various ways to configure the Amazon VPC to run EC2 worker nodes for your Kubernetes cluster managed by Amazon EKS. We’ll pay particular attention to how to ensure your subnets are properly configured to allow nodes to connect to the cluster control plane.

This blog does not cover pod networking concepts such as the VPC CNI, subnet sizing, or IP address allocation for pods. To learn more about these topics, visit the EKS documentation.

The worker nodes connect either to the public endpoint, or through the EKS-managed elastic network interfaces (ENIs) that are placed in the subnets that you provide when you create the cluster. The route that worker nodes take to connect is determined by whether you have enabled or disabled the private endpoint for your cluster. Even when the private endpoint is disabled, EKS still provisions ENIs to allow for actions that originate from the Kubernetes API server, such as kubectl exec and logs.

The diagram below shows this system: 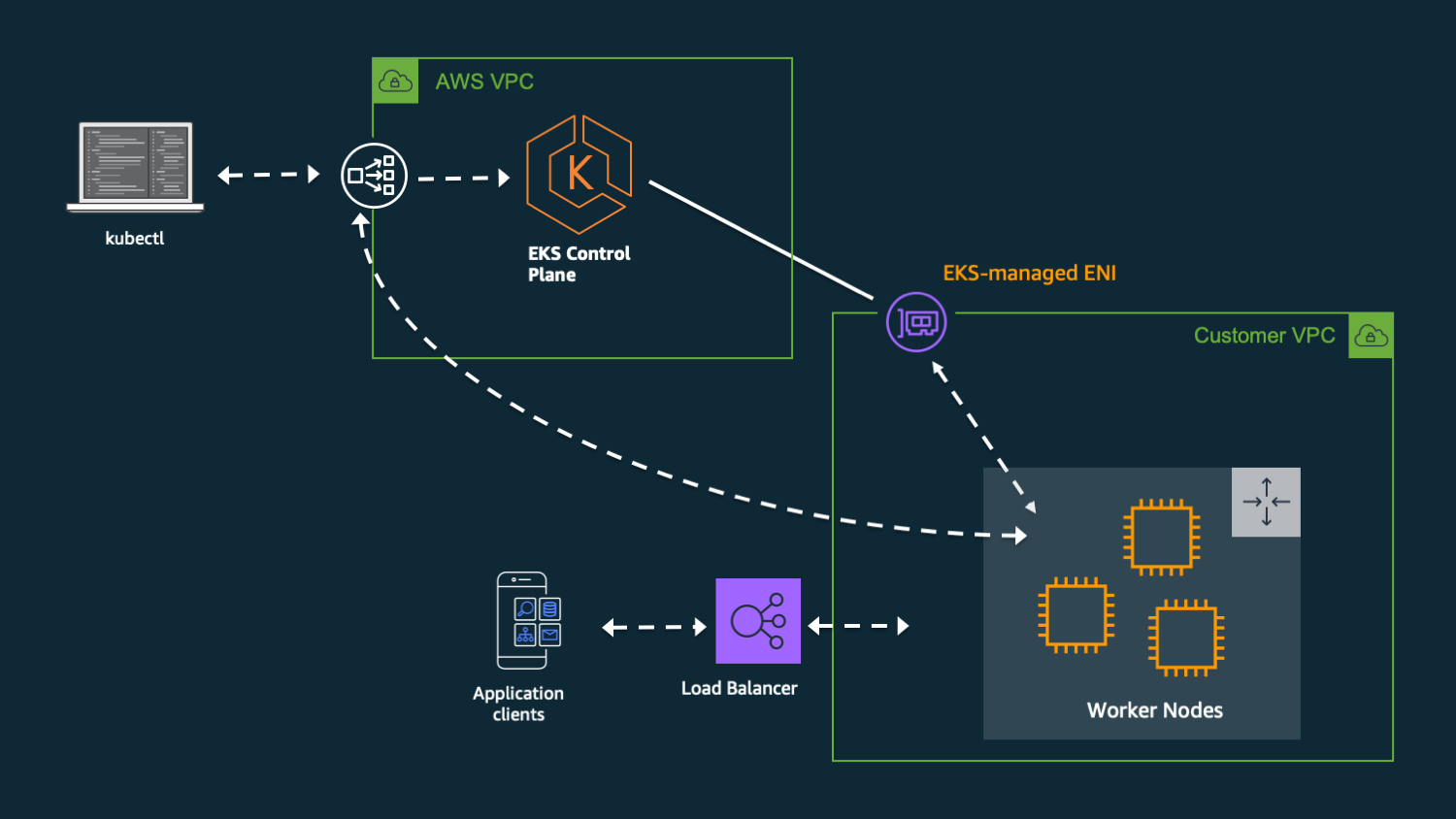 The order of operations for a worker node to come online and start receiving commands from the control plane is:

If the node is unable to reach the cluster endpoint, it’s unable to register with the control plane and thus unable to receive commands to start or stop pods. If new nodes are unable to connect, this prevents you from being able to use these nodes as part of the cluster.

How your nodes connect to the managed Kubernetes control plane is determined by which endpoint setting you have configured for the cluster. Note, these endpoint settings can be changed anytime through the EKS console or API.

This is the default behavior for new Amazon EKS clusters. When only the public endpoint for the cluster is enabled, Kubernetes API requests that originate from within your cluster’s VPC (such as worker node to control plane communication) leave the VPC, but not Amazon’s network. In order for nodes to connect to the control plane, they must they must have a public IP address and a route to an internet gateway or a route to a NAT gateway where they can use the public IP address of the NAT gateway. 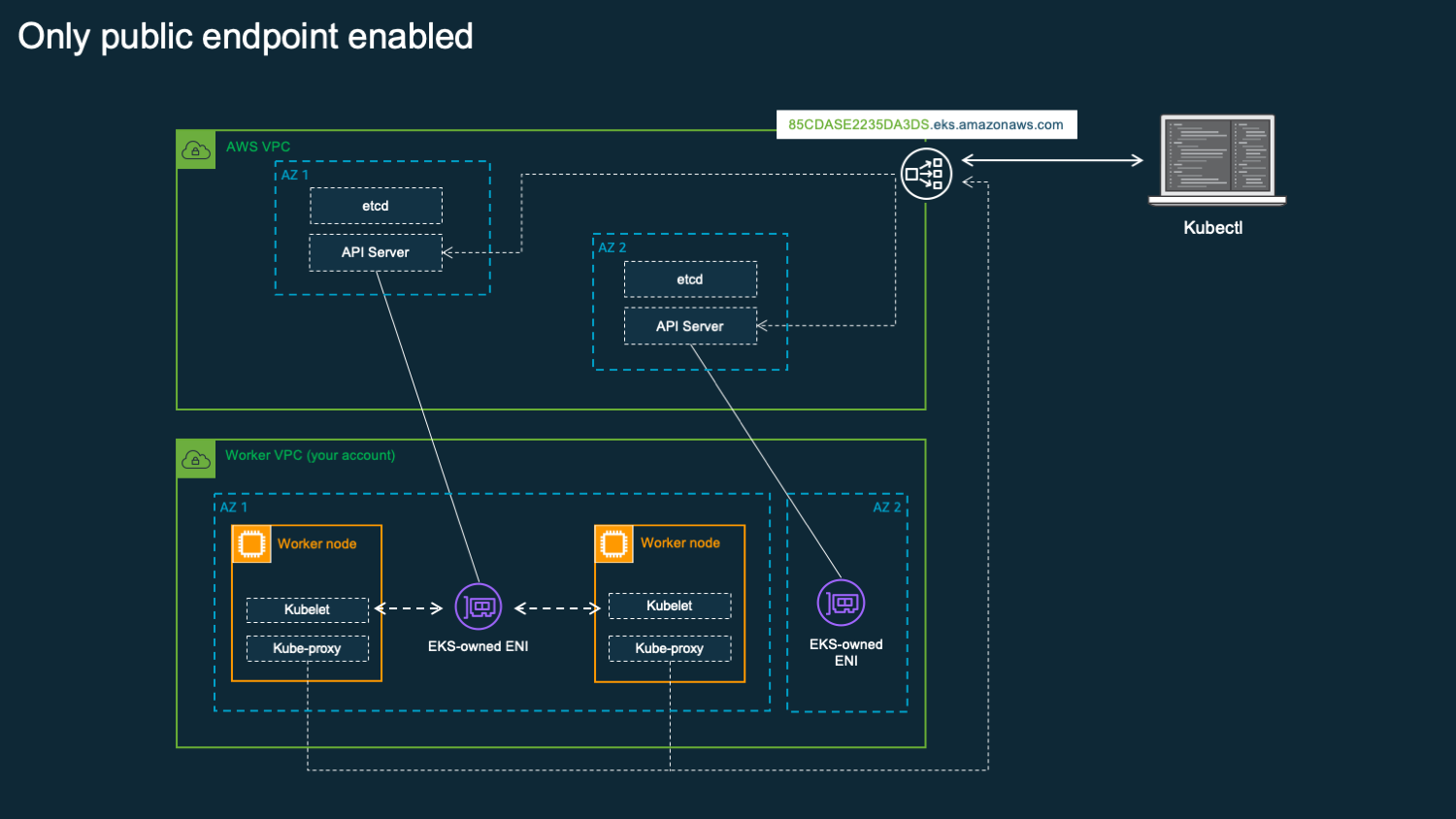 When both the public and private endpoints are enabled, Kubernetes API requests from within the VPC communicate to the control plane via the EKS-managed ENIs within your VPC. Your cluster API server is accessible from the internet. 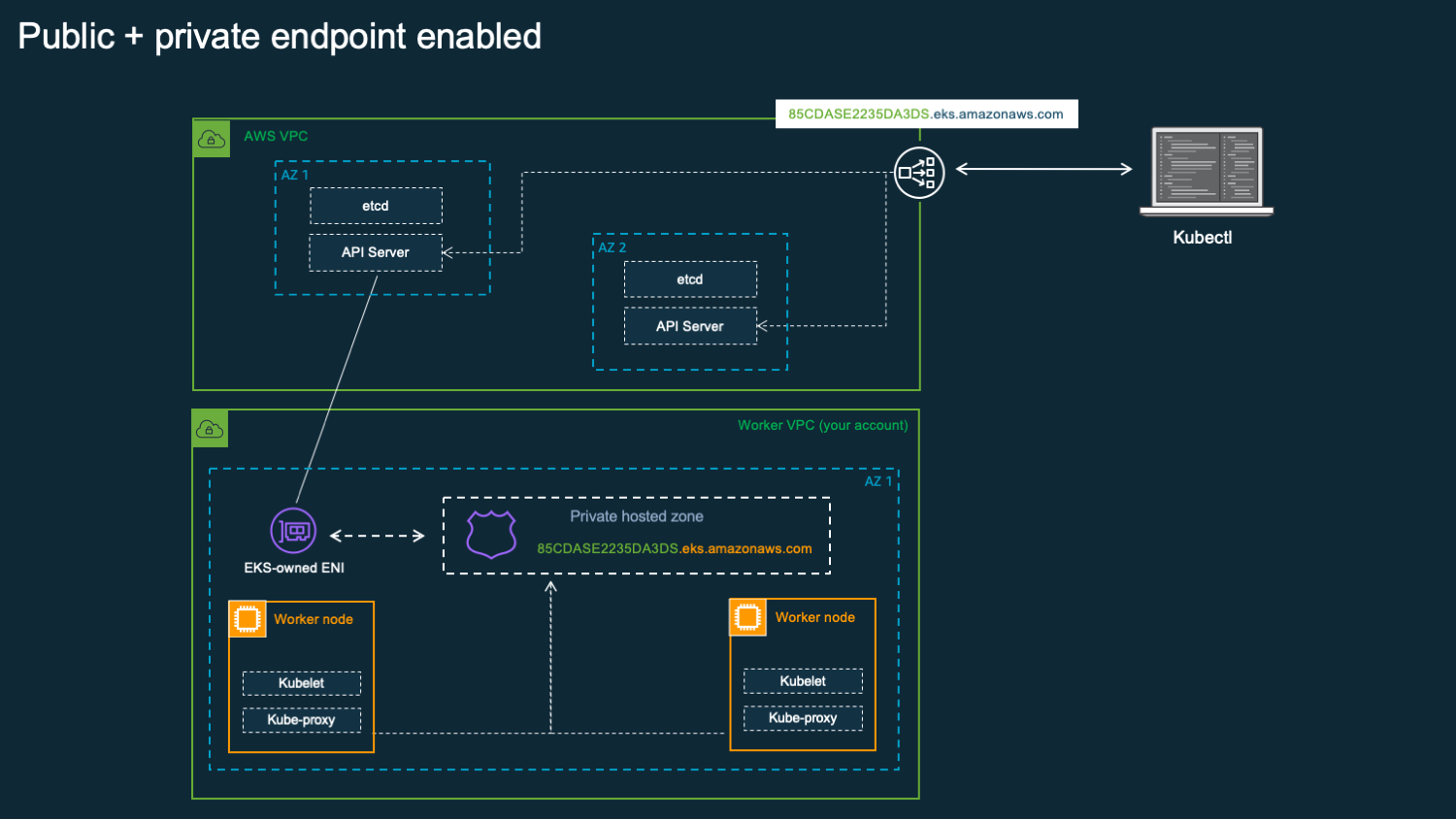 When only the private endpoint is enabled, all traffic to your cluster API server must come from within your cluster’s VPC or a connected network. There is no public access to your API server from the internet. Any kubectl commands must come from within the VPC or a connected network. This is typically achieved through using AWS VPN or AWS DirectConnect to your VPC. If you want to restrict access to the endpoint, but don’t have AWS VPN or AWS DirectConnect, adding CIDR restrictions to the public endpoint allows you to limit connections to the endpoint without additional networking setup.

For more information on connectivity options, see Accessing a Private Only API Server. 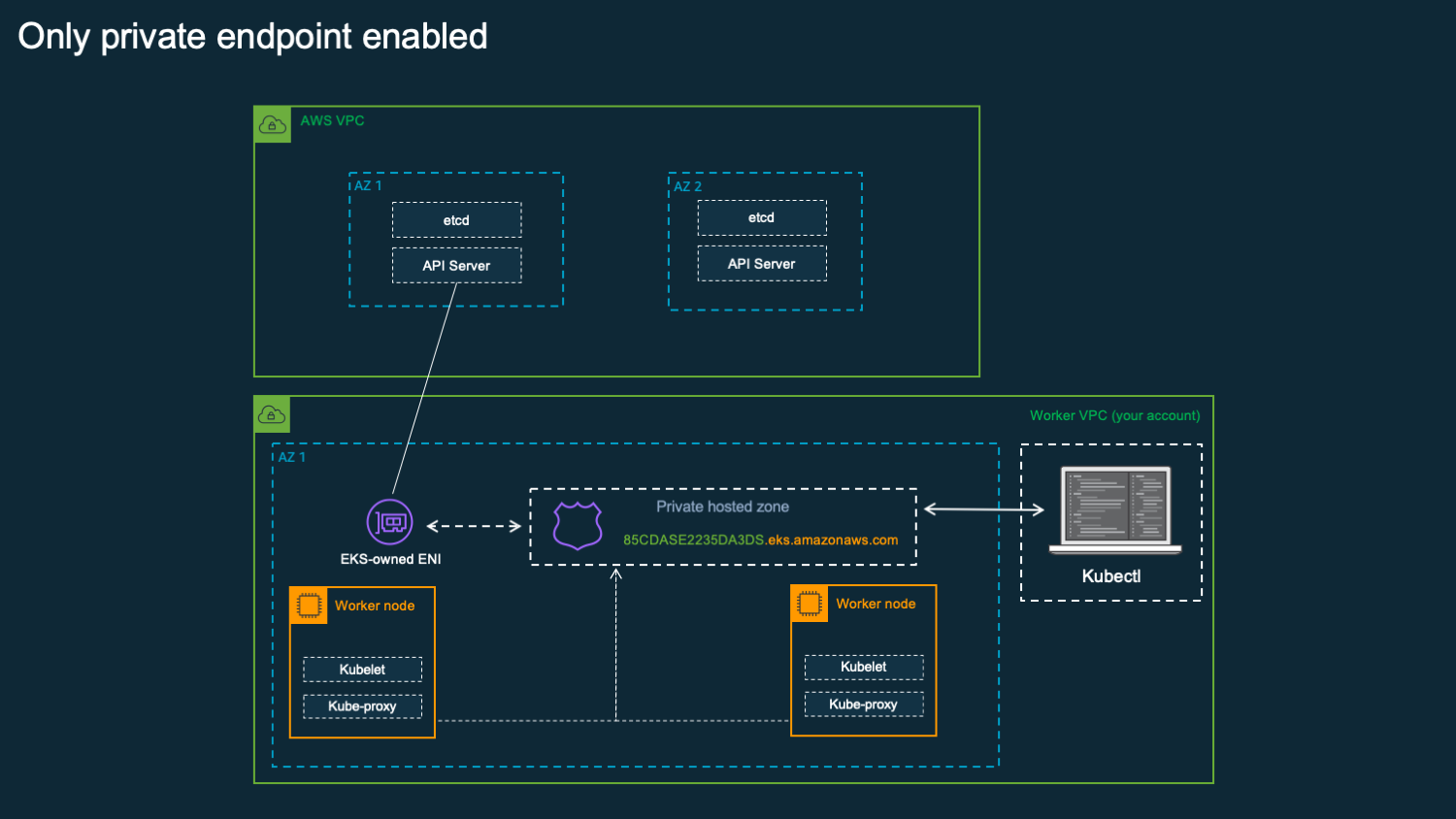 Sidebar: Do my worker nodes need to be in the same subnets as the ones I provided when I started the cluster?

No. Your worker nodes only need to run in the same VPC. They can run in separate subnets from the ones you provided when you started the cluster. This can allow for more IP space or running nodes in multiple availability zones. Subnets you use for your nodes must be tagged appropriately (a step that EKS handles automatically when you create the cluster), so any additional subnets must be manually tagged. To learn more, see the EKS documentation on VPC configuration.

Now that we have the connection basics down, let’s walk through a few of the common scenarios for setting up your cluster networking with Amazon EKS.

The ability for traffic that originates somewhere else to reach your nodes is called ingress. Traffic that originates from the nodes and leaves the network is called egress. Nodes with public or elastic IP addresses within a subnet configured with an internet gateway allow ingress from outside of the VPC. Private subnets usually include a NAT gateway, which only allows ingress traffic to the nodes from within the VPC while still allowing traffic from the nodes to leave the VPC (egress).

There are three typical ways to configure the VPC for your Amazon EKS cluster:

This is a simple and straightforward VPC architecture that is good for basic web apps and generally any application where ingress to the nodes from the public internet is not a concern. In this configuration, nodes and ingress resources (like load balancers) all are instantiated in the same public subnets. 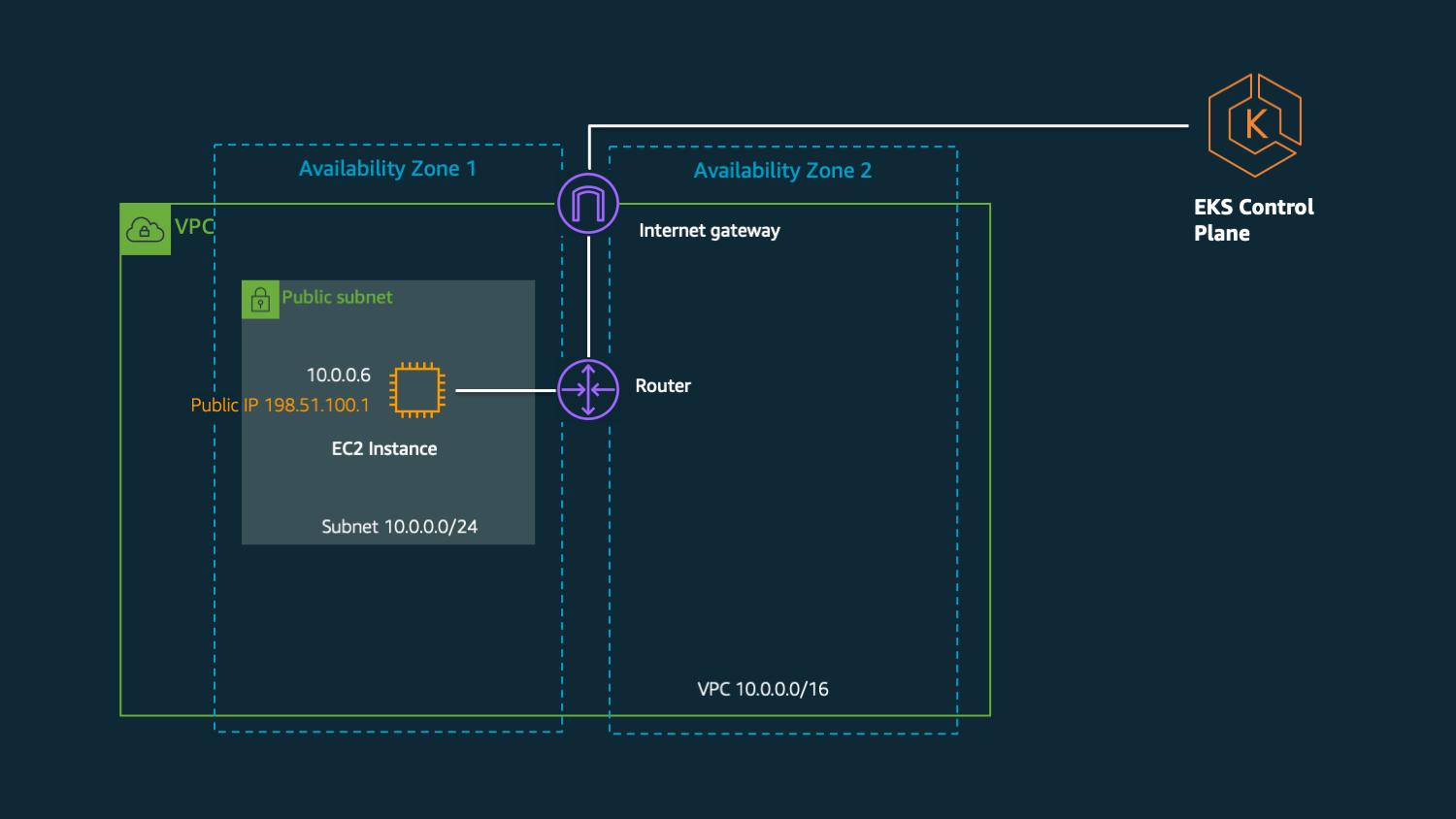 Learn about this architecture in the Amazon VPC documentation. Start a VPC with the public only subnet configuration using this CloudFormation template: https://amazon-eks.s3.us-west-2.amazonaws.com/cloudformation/2020-03-23/amazon-eks-vpc-sample.yaml 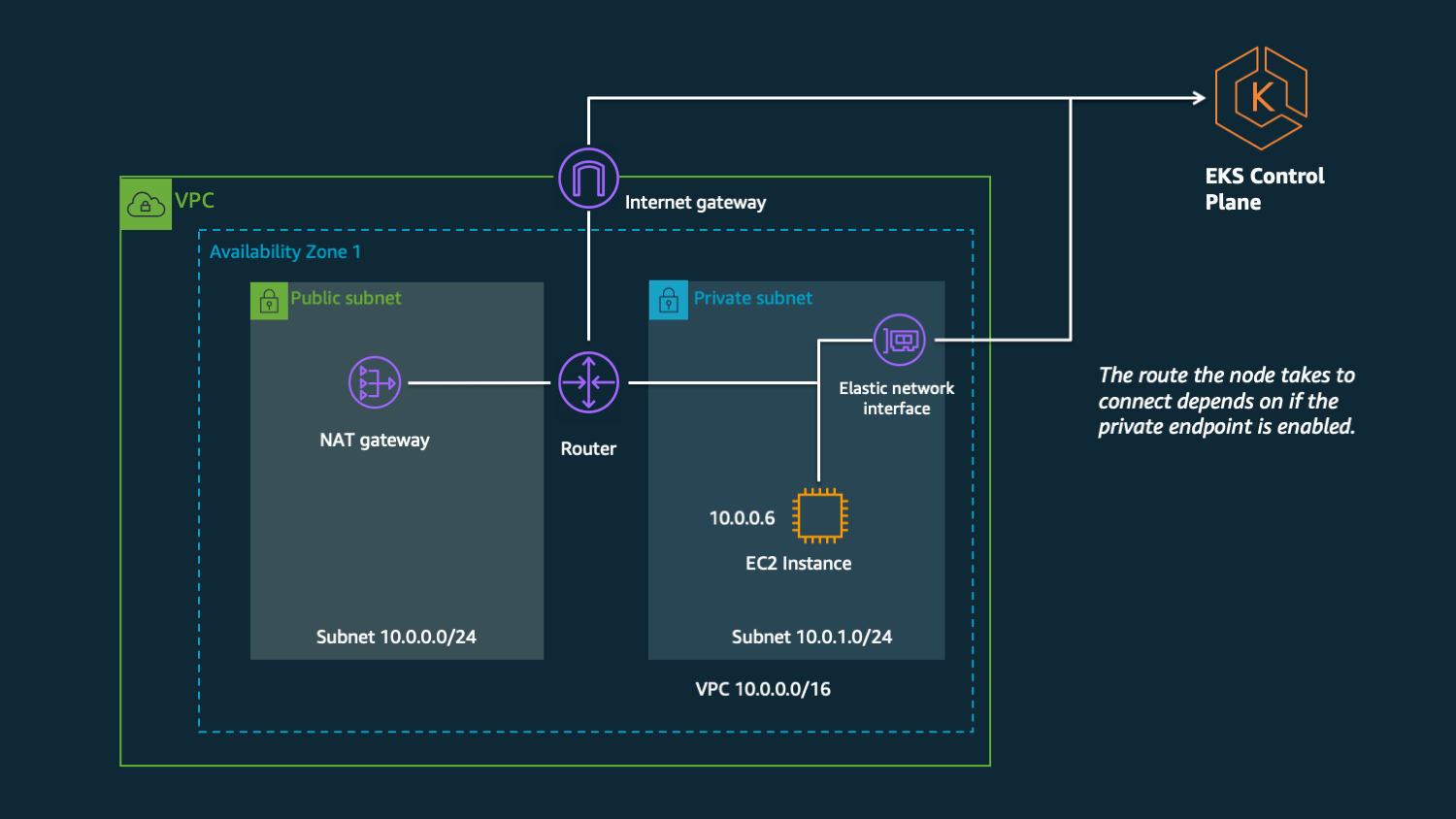 Learn about this architecture in the Amazon VPC documentation. Start a VPC with the public+private subnet configuration using this CloudFormation template: https://amazon-eks.s3.us-west-2.amazonaws.com/cloudformation/2020-03-23/amazon-eks-vpc-private-subnets.yaml

Also, note that this is the default VPC configuration for eksctl.

This is a less common VPC architecture. Use this architecture if your applications do not need to receive communications from the public internet. You’ll need to ensure that you have connectivity from your local computer to the private cluster endpoint. 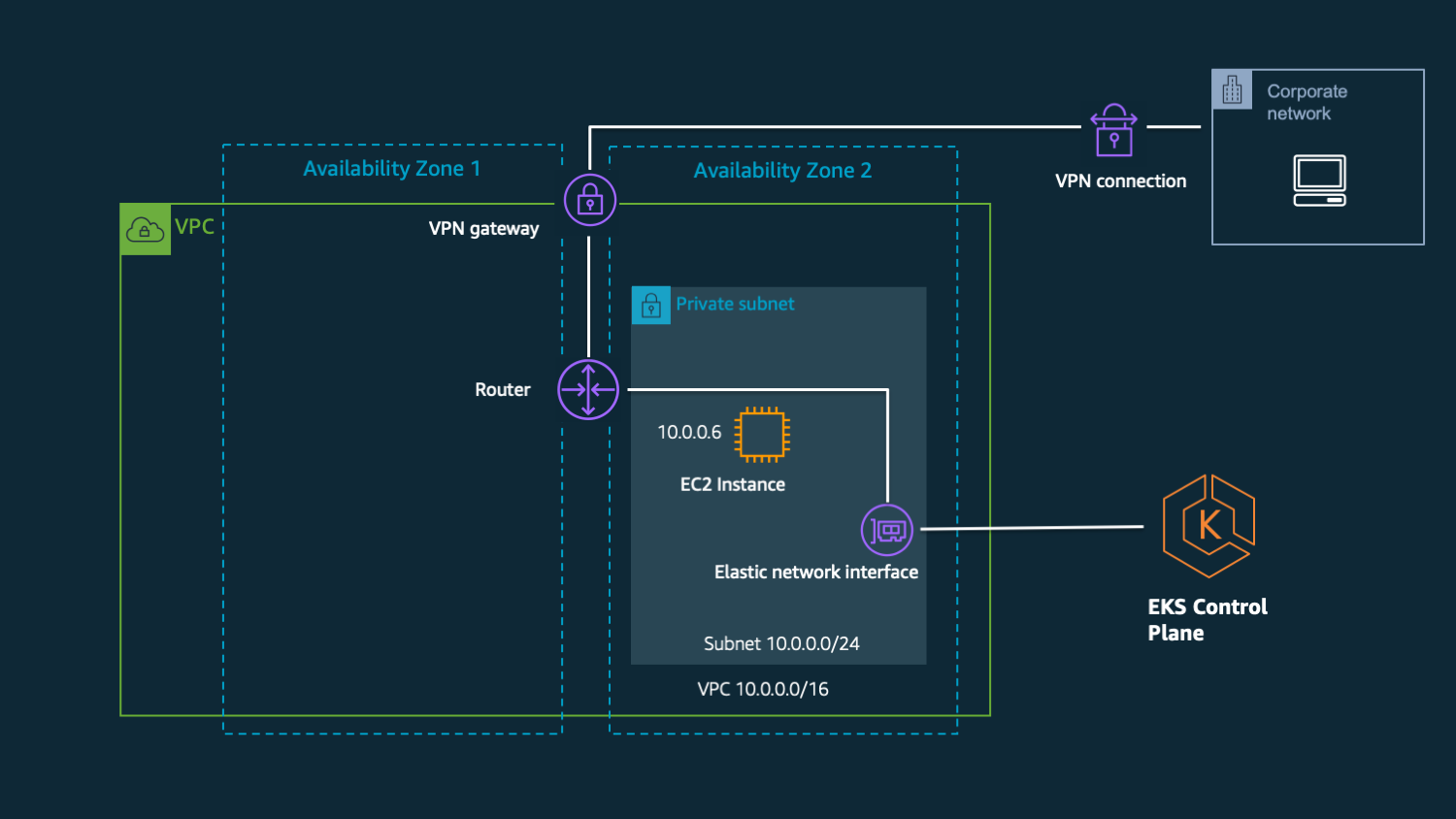 After reading this blog, you should now have a better understanding of the options for Amazon EKS VPC architectures. If you want to learn more about VPC configuration, check out the networking section of the Amazon EKS documentation.