Fluentd considerations and actions required at scale in Amazon EKS

Fluentd is a popular open source project for streaming logs from Kubernetes pods to different backends aggregators like CloudWatch. It is often used with the kubernetes_metadata filter, a plugin for Fluentd. The filter enriches the logs with basic metadata such as the pod’s namespace, UUIDs, labels, and annotations. It collects this information by querying the Kubernetes API server. While cluster and pod metadata is useful for identifying where logs originated from, frequently querying the API server can have a profound impact on the cluster, particularly when operating at scale. In this blog, we analyze the impact the plug-in has on the Kubernetes API and recommend how to optimally configure Fluentd and the kubernetes_metadata plug-in in large clusters.

Metrics, logs, and traces are the three fundamental pillars of observability. Logs play a particularly crucial role because they are application/runtime specific and are frequently correlated with traces and metrics to help identify an issue’s root cause. When you run a containerized application on a Kubernetes cluster, the kubelet automatically stores logs written to stdout and stderr in the /var/log/containers directory on each worker node. However, these logs are not stored indefinitely. When a Kubernetes pod is evicted or deleted, the logs associated to that pod are permanently removed from the worker node. Since the loss of these logs can be detrimental to compliance and debugging, logs are stored outside the cluster. Elasticsearch, Amazon CloudWatch, Loki, Splunk, and SumoLogic are among the multitude of backends available for aggregating and analyzing logs emitted by containers.

There are a variety options for streaming logs from containers to an external backend like CloudWatch. For example, you can use a logging sidecar that reads logs written to a volume shared between the application and logging containers. With this approach, you can handle multiple log streams from your application container, e.g. when your application produces logs with different log formats and where the mixing different log formats would deteriorate the manageability of your logging pipeline. Another way to capture logs is with a Kubernetes DaemonSet. With a DaemonSet, only one logging agent per node is required.

Fluentd is an open source data collector that lets you unify the collection and consumption of data from your application. It is often run as a “node agent” or DaemonSet on Kubernetes. With Fluentd, you can filter, enrich, and route logs to different backends. It is popular with the community because it has broad support for various data sources and outputs such as application logs (e.g., Apache, Python), network protocols (e.g., HTTP, TCP, Syslog), and cloud APIs (e.g Amazon CloudWatch and Amazon SQS).

Challenges with “kubernetes_metadata” filter at scale

kubernetes_metadata is a filter used to enrich and add context to logs streamed by Fluentd. With this filter, basic metadata about the container is appended to each log record, making it easier to track the origin of a log entry. To enrich the logs, Fluentd has to interact with the Kubernetes API server to retrieve several pieces of metadatas such as:

Each time a pod is created, the filter will call the get-pod method to retrieve this metadata from the Kubernetes API server. If the metadata filter is configured with a watch, it will also call the watch-pod method to keep track of updates to pods (more information at Kubernetes API Concepts). These API calls place an additional burden on the Kubernetes API, which can increase API latency and cause the cluster to become non-responsive or slow. Consider the impact of these API calls on the API server while running production workloads, especially as the number of worker nodes and pods increases.

During our tests, we gradually scaled our cluster up to 200 m5.2xlarge instances and ran 1,800 application pods with each pod generating roughly ~100 Apache log events per second. We also deployed FluentD as a DaemonSet.

As we increased the number nodes and pods, the first things that stood out were the increases to the “apiserver request latency” and “apiserver request rate”. As you can see from the chart below, the API request count more than doubled from initially ~100 req/s to ~220 req/s with 52 LIST, 46 GET and 41 WATCH requests:

Next, we analyzed the details of those API requests using Amazon Elastic Kubernetes Service (Amazon EKS) control plane logs and CloudWatch Log Insights. We found that Fluentd, which is identified as the “rest-client/2.1.0” user-agent, generates an excessive number of API calls against the Kubernetes API server within a relatively short period of time. We observed that it generated around ~13,283 LIST requests in aggregate.

As we dug deeper into these requests, we found that Fluentd (rest-client/2.1.0) overwhelms the Kubernetes API server with thousands of GET (~ 36,400) and LIST (~27,800) requests without any production workloads running in the cluster as seen below:

CloudWatch Log Insight query for the request count to API server by user agent and verb:

Based on our analysis, using Fluentd with the default the configuration places significant load on the Kubernetes API server. As your cluster grows, this will likely cause API latency to increase or other control plane failures that could impact other workloads running in your cluster. We recommend that you analyze and monitor the control plane as to avoid any negative impact to your clusters. In addition to elevated latency, you may also experience control plane errors after reaching a certain scale, for example:

To decrease the load on the API server, we tried setting the watch attribute to false in our Fluentd configuration.

After disabling the watch at the 21:10 mark (see the dotted horizontal marker), the number of API requests issued against the API server per second decreased significantly while the log delivery workload remained the same.

Fluentd no longer issues an excessive number of “LIST/GET” calls to the API anymore and the number of requests comes down to reasonable levels as shown below:

Before changing your production configuration, we highly suggest you to test such changes in your non-production environment first and ensure you do not have any dependency for the changes in metadata after pods are created.

If, on the other hand, you still have a dependency on the watch feature, you can reduce the number of API calls against API server is setting K8S_NODE_NAME environment variable within your Fluentd DaemonSet. This configuration restricts the pod list to the worker node (more details kubernetes_metadata_filter):

As also seen in the source code of the kubernetes plugin, having watch feature enabled expects you to set K8S_NODE_NAME as well and it explicitly warn/logs about its impact on Kubernetes API server as follow:

In order to evaluate impact of this optimization, we set the watch to true and defined K8S_NODE_NAME within our setup. Here are our findings:

Top verbs towards API server by userAgent with watch Enabled and K8S_NODE_NAME: 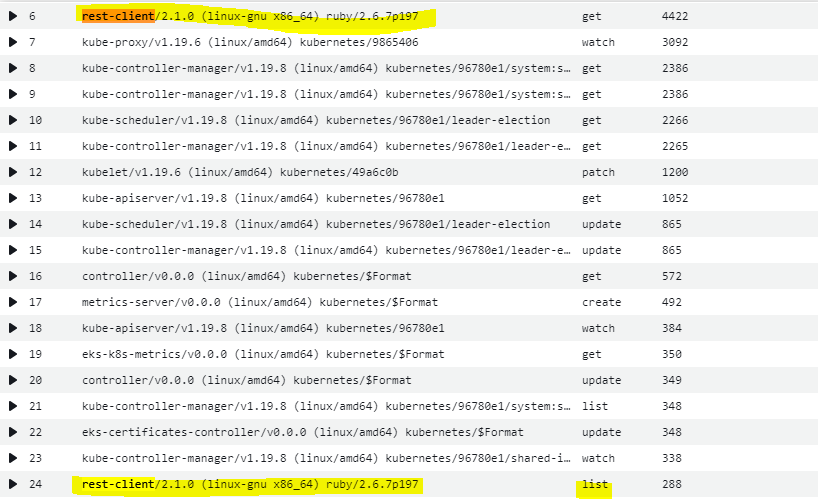 Fluent Bit is another open source and multi-platform log processor and forwarder that allows you to collect data and logs from different sources. It is becoming a popular log forwarder to run on edge locations such as worker node. Compared to Fluentd, Fluent Bit has the following major advantages when it comes to log delivery at scale within large EKS/Kubernetes clusters:

Considering the advantages outlined above, we highly recommend using Fluent Bit to stream logs in EKS clusters whenever possible. In case you already have Fluentd running in your EKS clusters, we encourage you to start to planning your migration from Fluentd to the AWS Fluent Bit image, at least on EKS worker nodes.

Admittedly, Fluentd addresses many use cases that make it a good choice for certain Kubernetes workloads. We also recognize that migrating away from Fluentd may not be feasible in the short-term. This could be due to a plug-in dependency or perhaps you simply need more time to plan your migration. In these cases, we’d like you to consider transitioning Fluent Bit by running Fluent Bit as a DeamonSet on each worker node and forwarding logs to a Fluentd service/deployment as shown in the diagram below. With this approach, you can still use Fluentd for enrichment, filtering, etc before shipping the logs to their final destination. 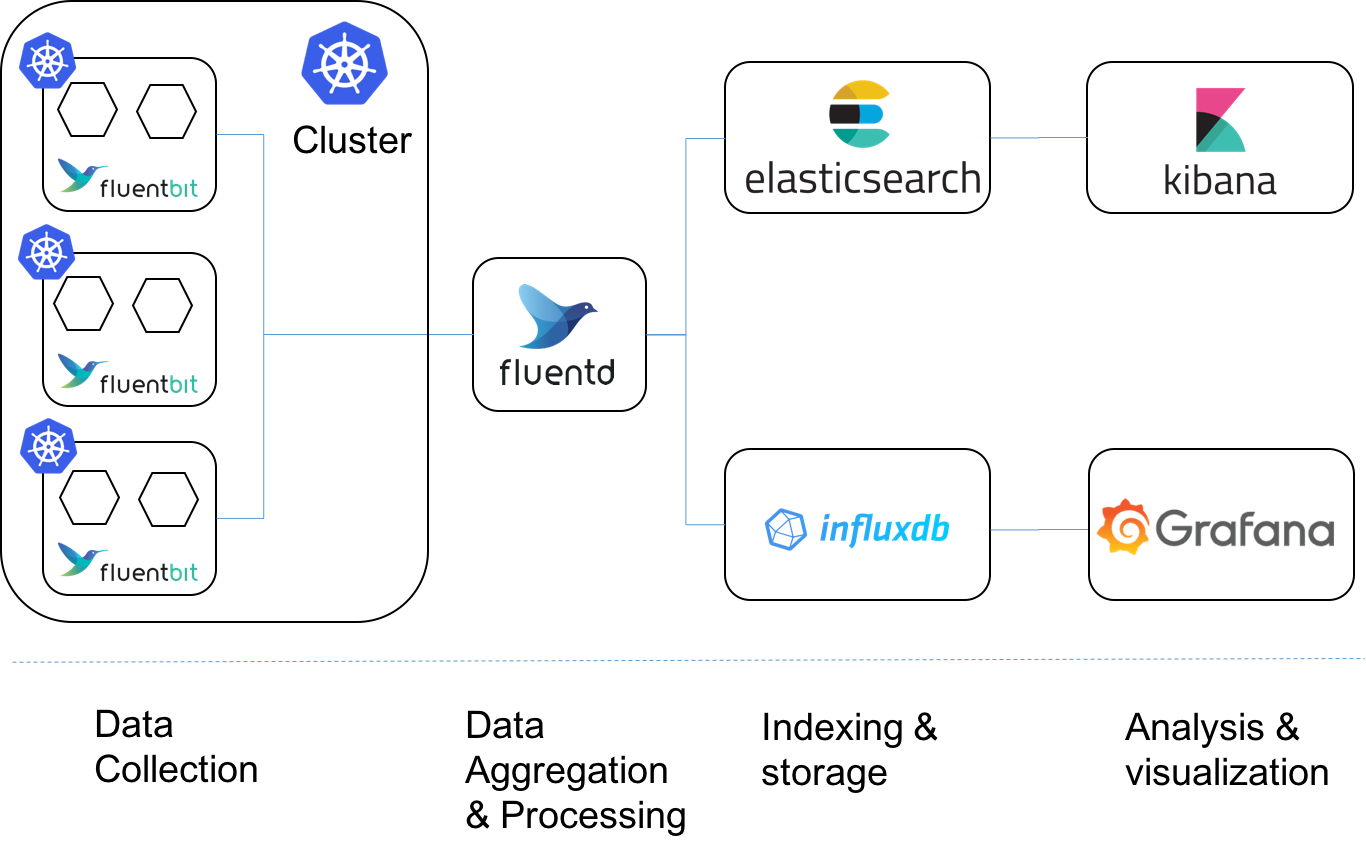 If you need to run Fluentd for any reason, we highly encourage you to review your existing configuration and verify that the following best-practices are in place:

1. Disabling watch feature in kubernetes filter, especially for the clusters that have long-running pods: In order to prevent excessive API calls, you need to set watch to false in the kubernetes_metadata filter as explained above.

2. Configuring the Fluentd DaemonSet to use K8S_NODE_NAME: If you have dependency on the watch feature, make sure that K8S_NODE_NAME environment variable is set as this will reduce the load to some extent before impacting your application’s performance. This will reduce cache misses and excessive calls to the Kubernetes API.

3. Stopping the delivery of unnecessary metadata/information at source: By default, while enriching the logs, the metadata filter appends metadata information such as annotations and labels into the log entries. This behavior not only increases log size and bandwidth consumption but also degrades performance of your log delivery pipeline. However, the Kubernetes metadata filter plugin allows you to ignore the metadata you are not interested in by configuring it with the following options:

If you are sending logs into CloudWatch Logs, you can remove Kubernetes metadata from being appended to log events by adding the following line to the record_transformer section in the Fluentd configuration:

By keeping the log delivery constant and skipping the unnecessary collection of metadata, we saw a reduction of network bandwidth and memory utilization as shown below:

4. Specifying resource requests and limits for Fluentd: As with all pods, you should set resource requests and limits to prevent containers from consuming the lion’s share of the host’s resources and starving other containers of resources. This is particularly important in large clusters where add-ons like Fluentd consume more than their default limits (250m/1Gi). If a large cluster is deployed without adjusting these values, the add-ons may get OOM killed or perform poorly. If you’re unsure of the amount of CPU/memory to allocate to the Fluentd container, consider running the VPA in “reporting” or “off” mode where VPA only recommends updates to be applied to pods. See Vertical Pod Autoscaler and https://github.com/kubernetes/autoscaler/tree/master/vertical-pod-autoscaler for further information.

5. Using cache size and cache TTL to reduce the requests to the API server: Fluentd v1.2.0 and above includes the following changes/parameters:

The Kubernetes metadata filter outputs information about cache size, caches misses, and other data that can be useful when setting the cache size. Be aware that increasing the cache size can effect the memory requirements for Fluentd.

6. Avoiding extra computations: This is a general recommendation. It is suggested NOT TO HAVE extra computations inside Fluentd. Fluentd is flexible to do quite a bit internally, but adding too much logic to the configuration file makes it difficult to read and maintain while making it less robust. The configuration file should be as simple as possible.

7. Watching for buffer overflow errors: A BufferOverflowError happens when output speed is slower than incoming traffic. So there are several approaches:

8. Monitor the queue length and error count: If these Prometheus metrics are increasing, it means Fluentd cannot flush the buffer to the destination. Once the buffer becomes full, you will start losing data:

Considering challenges described above, we highly recommend you to consider to taking advantage of Fluent Bit for log delivery to reduce the load on your Kubernetes API server. In the event you still need to use FluentD within your cluster, consider configuring it in a way that will not impact your production workload based on the information above. For more details around using Fluent Bit with EKS Clusters, its performance advantages and recommended best practices, please see Fluent Bit Integration in CloudWatch Container Insights for EKS and to get insights around how such migration can happen with Container Insights for EKS as an example, please see Quick Start setup for Container Insights on Amazon EKS and Kubernetes