The AWS ALB ingress controller allows you to easily provision an AWS Application Load Balancer (ALB) from a Kubernetes ingress resource. Kubernetes users have been using it in production for years and it’s a great way to expose your Kubernetes services in AWS.

We are pleased to announce that the ALB ingress controller is now the AWS Load Balancer Controller with added functionality and features such as:

We’ll dive deeper into these new features but first let’s look at how Kubernetes exposes pods to external traffic with services and ingress.

Kubernetes uses services to expose pods outside of the cluster. One of the most popular ways to use services in AWS is with the loadBalancer type. With a simple YAML file declaring your service name, port, and label selector, the cloud controller will provision a load balancer for you automatically.

This is great because of how simple it is to put Elastic Load Balancing (ELB) in front of your application. The service spec been extended over the years with annotations and additional configuration. A second option is to use an ingress rule and an ingress controller to route external traffic into Kubernetes pods.

Ingress controllers in AWS use ELB to expose the ingress controller to outside traffic. They have added benefits such as advanced routing rules (e.g. path-based routing /service2) and consolidating services to a single entry point for lower cost and centralized configuration. 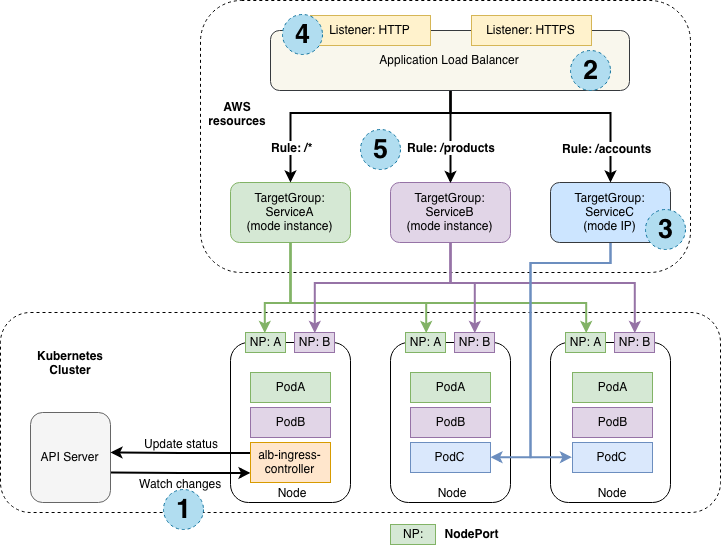 Let’s take a closer look at the new features.

Customers often need to run non-HTTP based services inside Kubernetes. Some examples of when you might want to use an NLB include game servers and services that use UDP communication. TCP/IP services work great on Kubernetes but exposing those services publicly has limited options. Exposing NodePorts and manually routing traffic to the correct instances have been popular options in the past.

The new Load Balancer Controller allows you to create NLBs for your Fargate pods with a simple annotation on the service.

NLB IP targeting mode can also be useful outside the context of Fargate to optimize pod registration to NLBs. Using IP targeting mode, only the specific pods that belong to each service are added as targets. This allows your NLB to distribute traffic directly to pods, which decreases latency and improves scalability. This can also result in smaller Target Groups in large clusters, reducing management complexity.

In the AWS ALB ingress controller, prior to version 2.0, each ingress object you created in Kubernetes would get its own ALB. Customers wanted a way to lower their cost and duplicate configuration by sharing the same ALB for multiple services and namespaces.

By sharing an ALB, you can still use annotations for advanced routing but share a single load balancer for a team, or any combination of apps by specifying the alb.ingress.kubernetes.io/group.name annotation. All services with the same group.name will use the same load balancer.

When you use load balancers in AWS, you can set up different target groups to route traffic to service. In the new AWS Load Balancer Controller, you can now use a custom resource (CR) called TargetGroupBinding to expose your pods using an existing target group.

The TargetGroupBinding makes it easier to see the state of your grouped ingresses using the Kubernetes API because instead of switching between kubectl and aws, you can now see a more complete picture of your resources directly in kubectl.

If you’ve experienced API limits in the past, this new controller greatly reduces the API calls needed by using TargetGroupBindings. Instead of needing to update the ALB every time the target pods change (e.g. during scale events), the controller only needs to call the AWS APIs to update targets of TargetGroup directly.

If you’re using the AWS ALB Ingress Controller, you can seamlessly switch to the new AWS Load Balancer Controller. Your existing ingress rules and annotations will still work without changes. All of your existing rules and configuration will work the same way.

To take advantage of the new features, you’ll need to update to the new controller and start using the new annotations on your services and ingress objects. Check out the migration documentation for more information. If you have issues with the controller or would like to contribute, please get involved here.