I wanted to make some improvements that would help to maintain the project but also give customers easier visibility into troubleshooting the Quick Start themselves. Previously, if the AD DS Quick Start failed to create the stack, you would need to relaunch the template with Rollback Set to No. Then you would need to use Remote Desktop to connect to the instance that errored and examine the logs in a local directory.

In the update, I wanted to push logs centrally to Amazon CloudWatch, which would allow customers to be able to search through logs without having to connect to each instance. However, I still wanted to maintain the ability to spin up a Quick Start and tear down all the associated resources. To achieve these improvements, I used a combination of AWS CloudFormation and AWS Systems Manager.

In this first blog post, I’ll discuss the following:

You can find the artifacts for this Quick Start on GitHub or by launching the Quick Start.

Why use Systems Manager and AWS CloudFormation together

If AWS CloudFormation already works, why use Systems Manager? This is an understandable question. To answer, I’ll draw a comparison to building a house. In building a house you would not use only nails, but a combination of screws and nails depending on the task. Each fastener has its strength in a different situation.

For a Quick Start, Systems Manager has a strength in automation within a guest operating system (OS), whereas AWS CloudFormation has a strength in defining AWS Cloud resources. When updating the Active Directory Domain Services Quick Start, I used AWS CloudFormation at the AWS Cloud layer to define AWS resources, and I used Systems Manager to configure the OS of the instance, as shown in the following diagram. 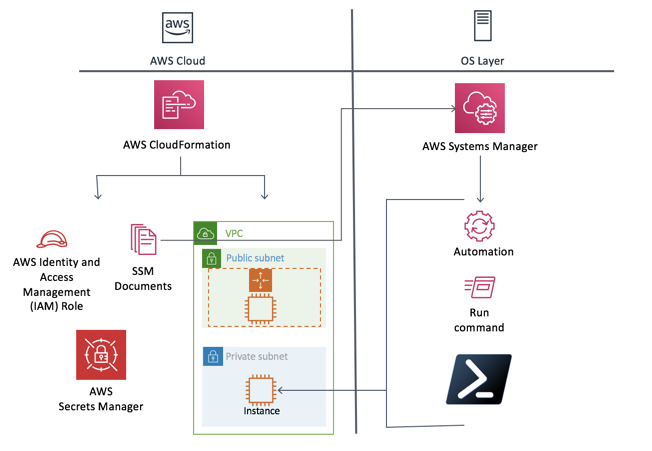 By maintaining the Quick Start within AWS CloudFormation, you keep the ability to deploy a stack and then delete a stack from a single template. Systems Manager gives you an easy mechanism to centrally aggregate logs to CloudWatch.

When working on the Active Directory Domain Services Quick Start, my initial thought was to create an AWS Lambda-backed custom resource to trigger the Automation document, but I wanted to go simpler and not have to manage creation of Lambda functions and Lambda execution roles if I didn’t have to.

Instead, this Quick Start leverages Amazon Machine Images (AMIs) that include pre-installed tools such as AWS Tools for PowerShell and the Systems Manager Agent, so the needed components are available on each instance. In the diagram, you can see that when the second domain controller (DC) is launched, the Systems Manager Automation document is kicked off. 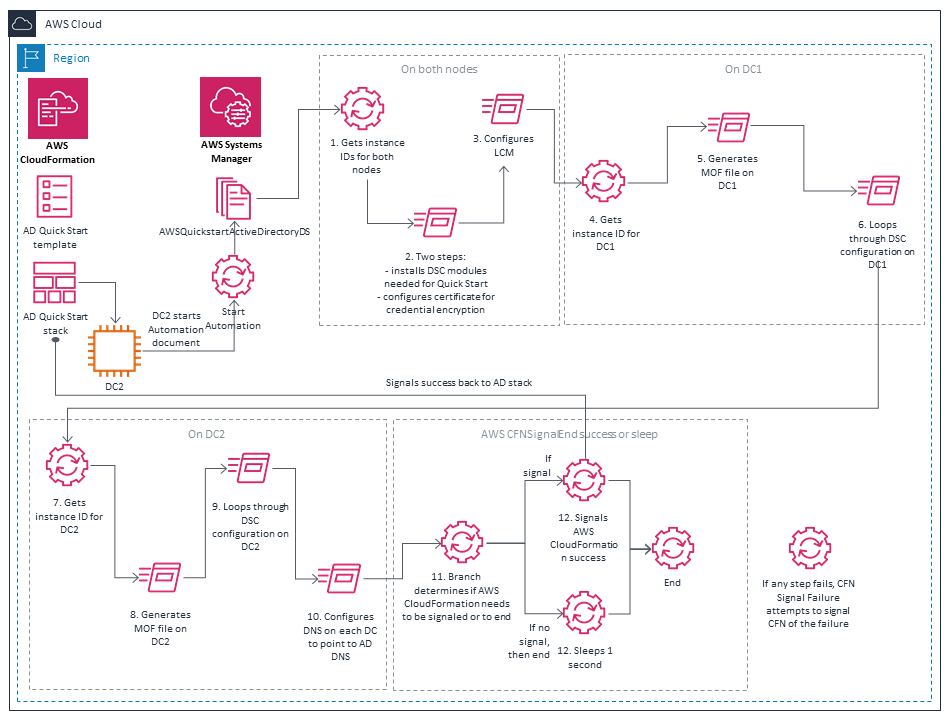 This is accomplished through the Amazon Elastic Compute Cloud (Amazon EC2) User Data feature using the Start-SSMAutomationExecution cmdlet, as in the following example.

You can also see how this is accomplished within the ad-1.template in the GitHub repo.

To have AWS CloudFormation wait, add a CreationPolicy attribute to the second domain controller.

Note that for each signal action, you need the StackName, LogicalResourceId, and a UniqueId, which is the instance ID of the resource.

Note also that each step that executes scripts is outputting logs to CloudWatch, allowing you to aggregate logs centrally in the Quick Start. If the automation were to fail, you would be able to search for the /aws/Quick_Start/${StackName} log group in CloudWatch to determine which step failed and why. Let’s use the AD DS Quick Start to show how you can search through CloudWatch to find a specific event.

The following screenshot shows the log group created by the AD DS Quick Start. You can choose the log group to examine all the log streams.

Note the extensive logs that are outputted from each step. In this example, we want to find the specific event Renamed computer to DC1. Enter the string you are looking for in the box and press Enter.

This will reduce the list to the log entries that contain this string. You can use this method to search for errors as well.

If you go to the execution of the Automation document in Systems Manager, you can also examine which steps were successful and which steps failed.

If a step failed, you can then choose the Step ID and examine the input parameters for the step in question. 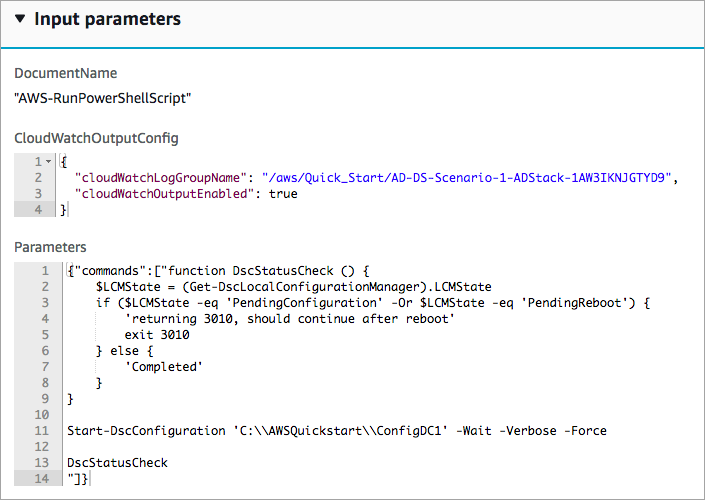 You can also get some of the log output from the step that ran, and you can choose the CommandId, which will also have a link to the logs that pertain to that step. 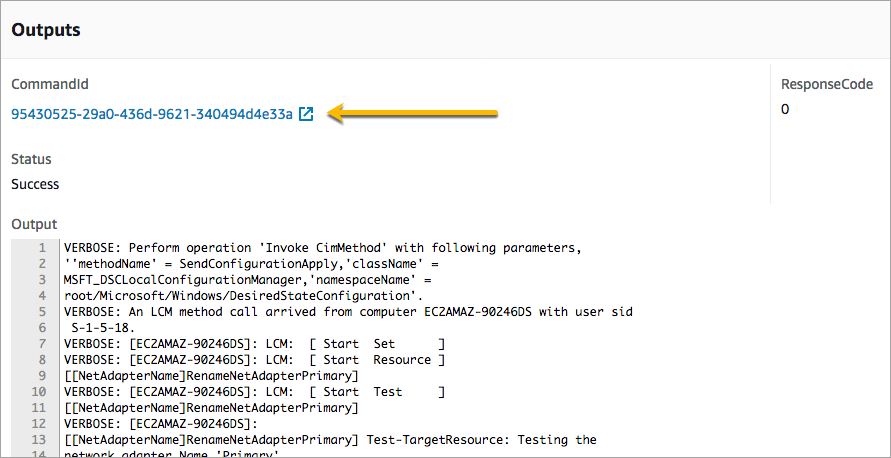