TCP Dump is an open source network packet analyzer (licensed under a 3-clause BSD license) which, in conjunction with the libpcap library, can also be used for capturing network traffic. It is one of the most widely used packet analyzers around because it provides a raw level of detail that solutions like TCP Flow don’t provide. It’s essentially a fire hose of data, so it’s sometimes used to capture data that is then read in using Wireshark, which is licensed under GNU GPL v2 and provides you with a great GUI for filtering and analyzing packets.

Amazon EC2 instances running an Amazon Linux AMI come with TCP Dump (tcpdump) pre-installed, so you don’t need to do anything there. The TCP Dump manual is even more intimidating than the TCP Flow manual, so here’s a simple base command you can start and experiment with:

Unlike TCP Flow output, your TCP Dump capture file(s) will probably be very hard to read. This is where Wireshark comes in handy. Wireshark actually comes with the command-line tool tshark, which you could use instead of TCP Dump (it’s built on top of TCP Dump), but it doesn’t provide a lot of added value for the general use case. If your own computer is Linux, you should be able to just install Wireshark with yum:

There are Windows and OS X installers available from the Wireshark website, which also has detailed documentation on the suite of features that you can take advantage of. There’s a lot of documentation there, so before you browse that it’s not a bad idea to play with the program a bit to get your feet wet.

I recommend immediately going to “View” -> “Time Display Format” and then changing the date format from epoch time (the default) to something more readable. You’ll see a table in the center pane of the GUI that displays one row per packet of data, followed by deeper details of a selected packet, followed by a pane with a hex and ASCII view of the packet. Above all this, you’ll see a blank field that you can fill in with a filter expression, of which Wireshark has an impressive array. You can explore them with the “+ Expression” button (you should see some familiar filters under the “TCP” section from the TCP Flow filter expressions) and then choose one to slice your traffic to just what you’re interested in. There are also some default filter expressions to choose from in “Analyze” -> “Display Filters”. Let’s once again take a look at a STARTTLS conversation with Amazon SES: 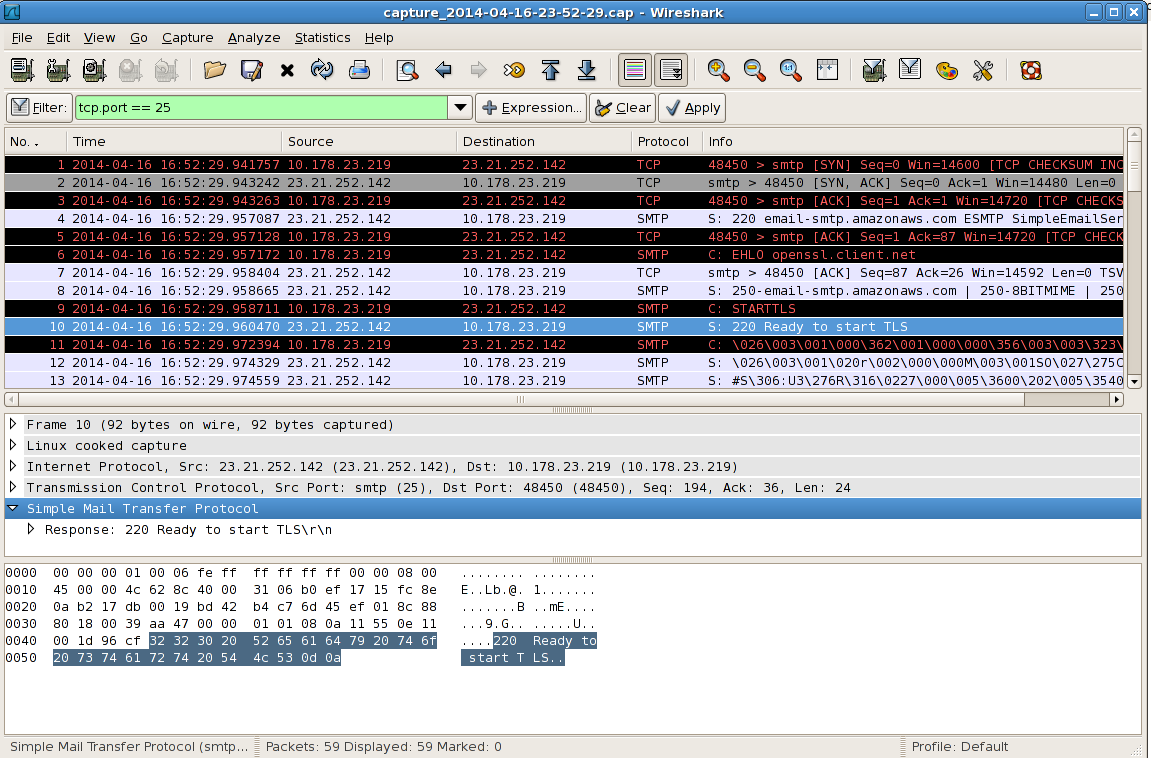 There are a few items of note here:

TLS wrapper mode encrypts everything right from the get-go, so your ability to peek into what’s happening is very limited. There is a way to get Wireshark to tell you which packets are used in the TLS negotiation, though. At a high level, the TLS setup process involves these steps:

If you’re deeply curious, you can read more in RFC 2246 (TLS 1.0), RFC 4346 (TLS 1.1), and RFC 5246 (TLS 1.2). Since both the client and server use a public/private key pair as part of this set-up process, you’ll need at least the client’s private key in order for Wireshark to understand the handshake. If you use Open SSL, you can generate and supply this pretty easily:

The first command line creates the key and the second command line is the one shown in the Amazon SES Developer Guide but with a private key supplied. With this connection set up, you can have your SMTP conversations and use the same TCP Dump command as before, only with port 465:

Then, just transfer the capture file and rsa_key file to your own computer and fire up Wireshark: 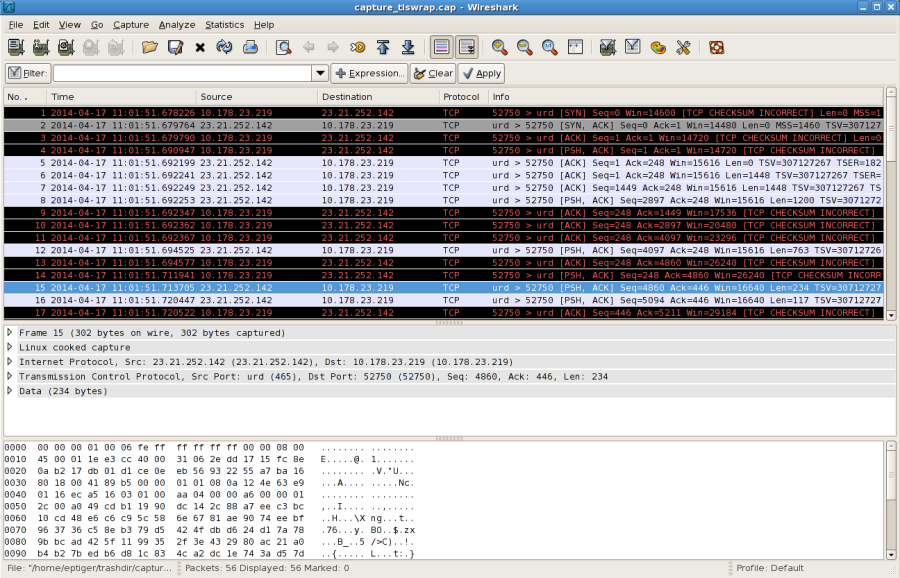 Note that all you see are SYNs and ACKs. We can fix this. Go to “Edit” -> “Preferences”, expand “Protocols” and then select “SSL”. For the above example, if the rsa_key file is in my home directory I’d put the following in “RSA keys list”: 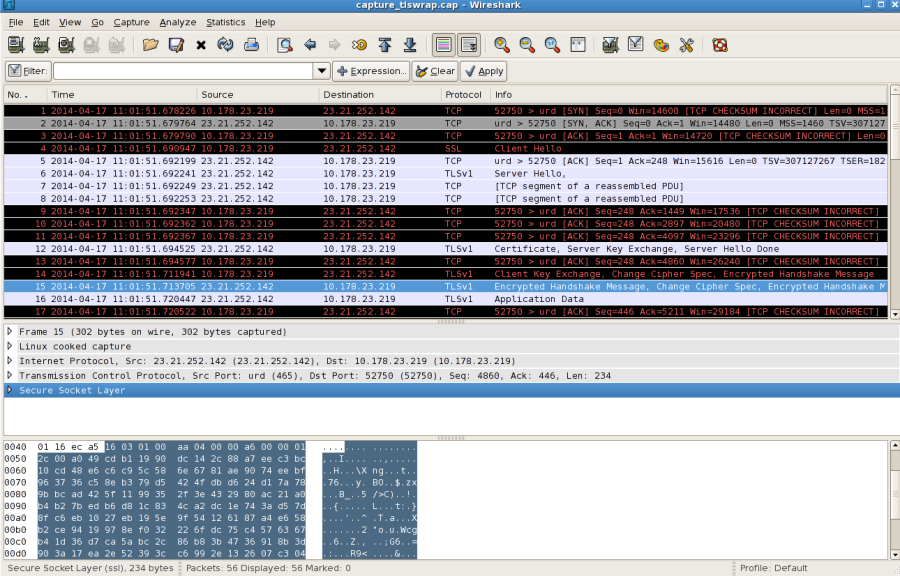 Now you’ll notice in the “Info” column that you can see more information at a high level and the protocol is specified in the previous column as TCP, SSL, or TLSv1 (whereas before it was just TCP). Additionally, the next pane with the packet breakdown has bits like “Secure Socket Layer” or whatever the protocol is that highlights the part of the packet involved. The “Application Data” rows are just encrypted SMTP messages. The real value though is being able to debug any TLS wrapper issues you may have by comparing good negotiations with bad ones or timestamps in good negotiations versus bad ones and getting to the bottom of whatever is going wrong.

We hope that these posts have given you a better understanding of what’s happening behind the scenes when you interact with Amazon SES, and empowered you to better debug problems that you may experience at the transport or network layer. Thanks for being an Amazon SES customer! Happy debugging!