Security remains a top priority for most organizations, and, in order to stay secure and compliant, they leverage agent-based vulnerability management tools, such as CrowdStrike, TrendMicro, and Tenable. AWS Systems Manager Distributor automates the process of packaging and publishing software to managed Windows and Linux instances across the cloud landscape, as well as to on-premises servers, via a single simplified interface. Customers can leverage Distributor to package and manage security and other monitoring agents, and then distribute them to cloud and on-premises instances as well.

Most customers have well-established landing zones built via AWS Organizations, with several AWS accounts spread across multiple regions. They want to centrally automate software package management and distribution across this large landscape. This post will demonstrate how you can build a solution that automates your software package distribution across all of your member accounts spread across regions within an AWS Organization via AWS Systems Manager. The key features leveraged are Automation, Distributor and State Manager.

Note: This solution works in all GovCloud and commercial regions regions except China.

The following prerequisites need to be completed to deploy this solution.

Note: To ensure optimal package management, we recommend only having the relevant files for a package uploaded in its own prefix within the S3 bucket that is utilized solely for this purpose.

Distributor, a capability of AWS Systems Manager, helps you package your software within a region in an account. The Centralized Software Distributor (CSD) solution described in this post enhances your ability to manage and distribute software packages across member accounts that are spread across regions in an AWS Organization.

To deploy the solution, launch this CloudFormation template in your organization’s management account.

The template deploys the following resources:

Provide the following inputs for the template:

Visit our GitHub repository to access the individual resource templates.

Update the highlighted parameters, and then execute this command in the management account of your organization.

This command will invoke the system to run it once immediately after it is created. To update it to run on a scheduled basis using --schedule-expression, see create-association in the AWS CLI Command Reference.

After the association has triggered the automation, open the Systems Manager console, and from the left navigation pane choose Automation. In Automation executions, you should see the most recent execution of both CSD-AddSoftwarePackageToDistributor and CSD-DistributeSoftwarePackage, as shown in Figure 2.

Click each execution to validate if they were completed successfully.

Depending on the number of regions, accounts, and instances that you execute this solution against, a successful run of the execution looks like the following in the CSD-DistributeSoftwarePackage execution details: 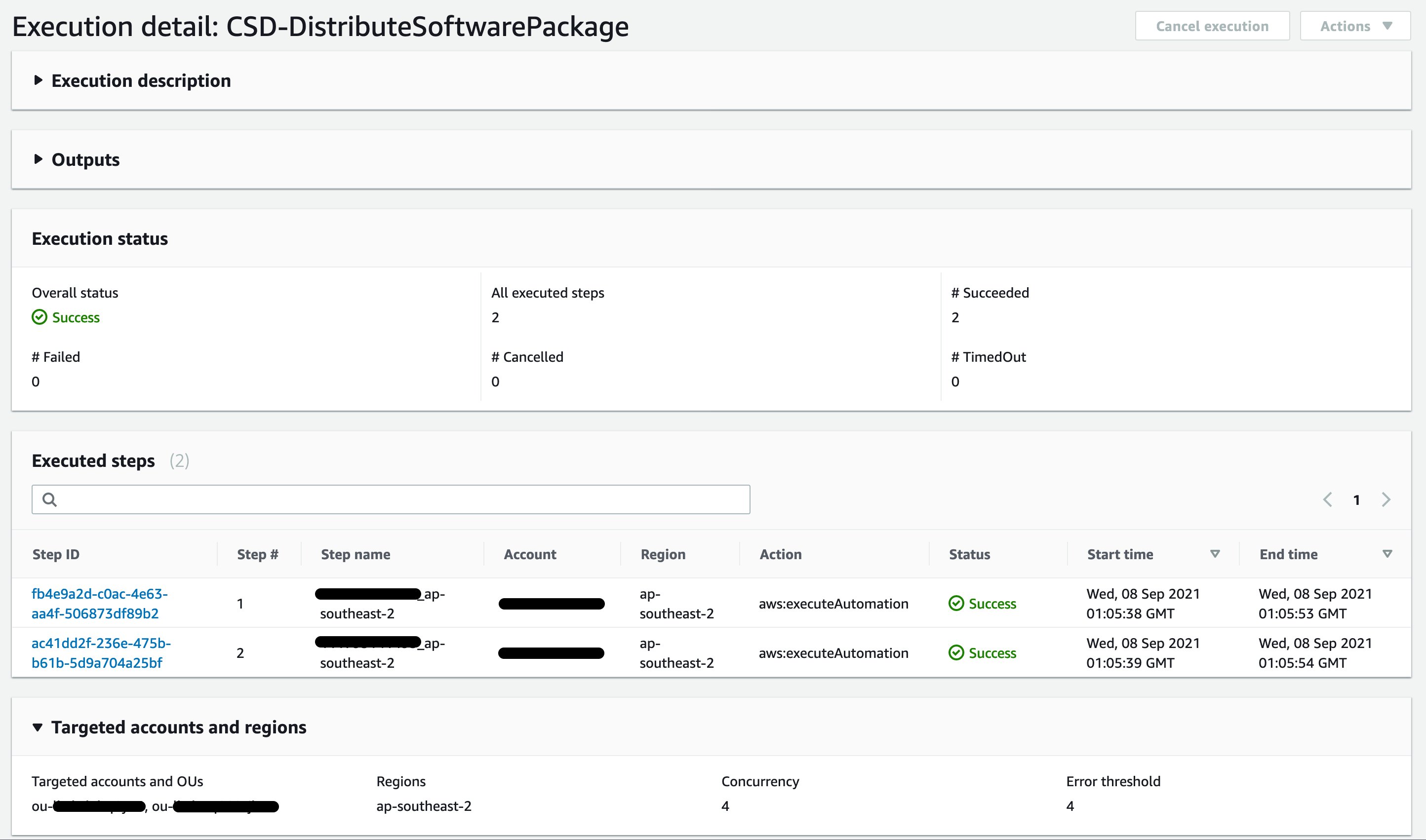 To ensure that the package was deployed to the targeted member account instances, navigate to the Systems Manager dashboard and select Run Command in the left pane. Under Command history, you should be able to see every invocation and their status.

Click any Command ID, and then select the instance ID for the command output. Check the Ouput section for both steps. On a successful completion, you can expect a similar output as shown in Figure 5. 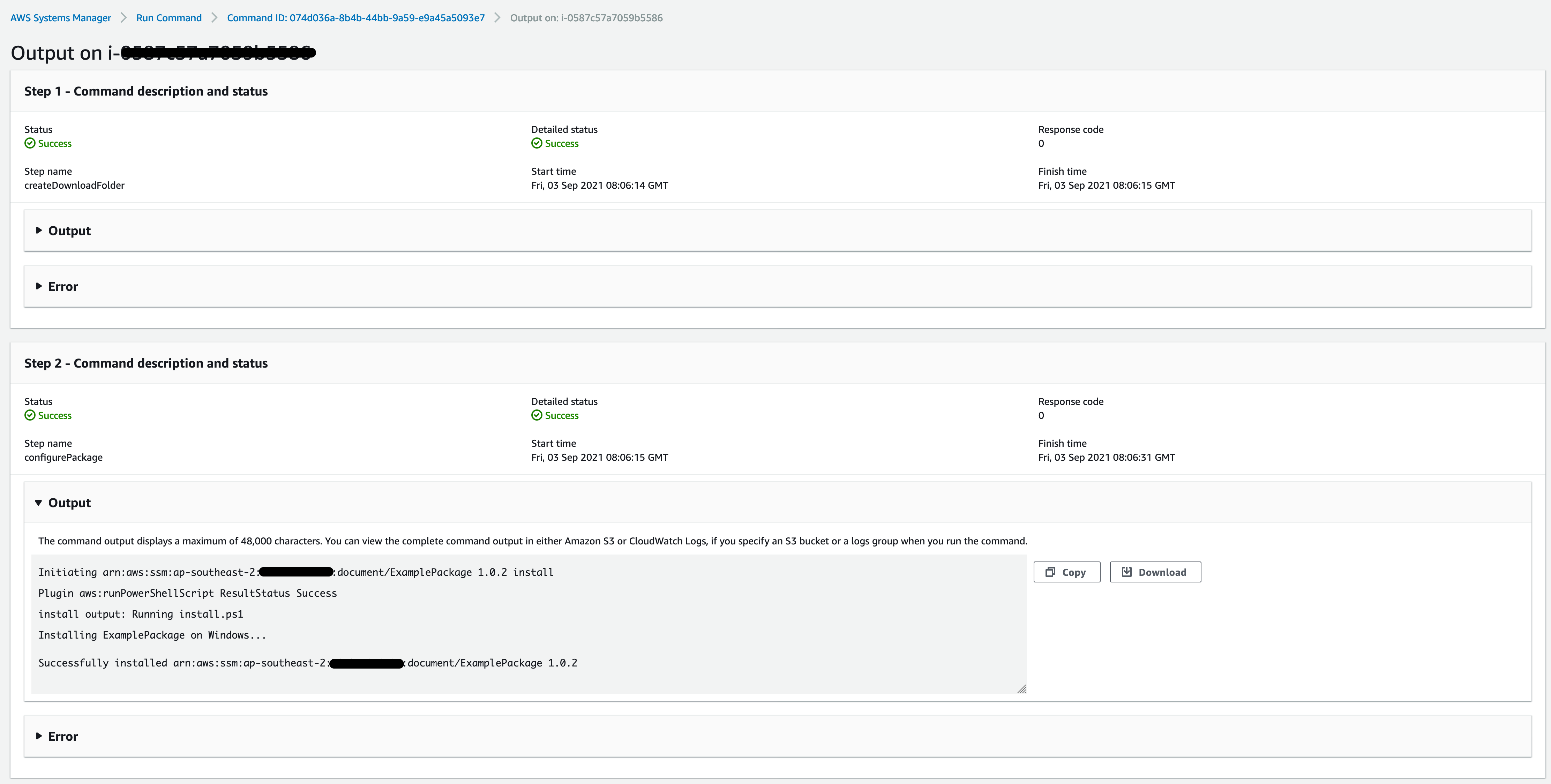 The solution will automatically deploy to any new accounts that you provision under the OUs specified when you originally deployed the CloudFormation template. The addition of new accounts or OUs will require updates to both CloudFormation and State Manager Association as described below. The addition of new regions will only require updating the Association.

Update the association using the instructions provided in Editing and creating a new version of an association with the new accounts, OUs, and/or Regions.

This post demonstrated how you can leverage AWS Systems Manager Distributor, as well as some of its other capabilities, to build a centralized software package distribution solution across all of your AWS accounts and Regions within an AWS Organization. With a consistent and reliable package management and distribution framework in place, you can now maintain your security and compliance posture across not only AWS, but also your on-premises infrastructure.