Lots of people responded to the link post that I put together last week. In fact, between the “what about me” emails and the responses to a Tweet that I made earlier today, I now have a plethora of good material. So, here we go again! 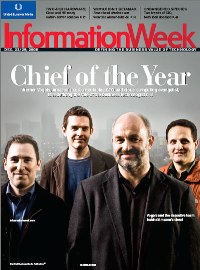 Information Week has named Amazon CTO Werner Vogels as their Chief of the Year. In a very detailed article they cover the history, current state, and overall philosophy of AWS. There’s also a separate interview with Werner.

Werner recently wrote an article about Eventual Consistency for the ACM Queue Magazine. Understanding this important concept (which has its roots in the CAP theorem) is essential to building a world-scale distributed system which is also highly reliable.

Werner sums up the theorem as follows:

A system that is not tolerant to network partitions can achieve data consistency and availability, and often does so by using transaction protocols. To make this work, client and storage systems must be part of the same environment; they fail as a whole under certain scenarios, and as such, clients cannot observe partitions. An important observation is that in larger distributed-scale systems, network partitions are a given; therefore, consistency and availability cannot be achieved at the same time. This means that there are two choices on what to drop: relaxing consistency will allow the system to remain highly available under the partitionable conditions, whereas making consistency a priority means that under certain conditions the system will not be available.

Stax makes it easy for Java developers to build, manage, and scale applications on Amazon EC2. On the coding side, there’s a complete MVC framework, RIA tools, and complete support for scripting. Development and testing is simplified by a local toolkit and an Ant plugin for easy builds. At deployment time, Stax uses EC2 to provide access to unlimited server resources.

The very same John M. Willis asked me to mention that Cloud Camp Atlanta will be taking place on Tuesday, January 20. Cloud Camps are a wonderful way to meet other people who are involved in and interested in cloud computing, and a can also give you a good sense of why people are so excited about it.

Adam Kalsey has put together a how-to video for their new Drupal AMI. In the 10 minute video, Adam shows how to use ElasticFox to launch their public Drupal AMI, connect it to an EBS (Elastic Block Store) volume, stop the instance, and then reconnect the storage to another EC2 instance. Run the video full-screen in order to see all of the details. Adam’s how to is also a really nice introduction to ElasticFox and to EBS. Although the video shows how how to use fdisk to create a partition table on the EBS volume, I’ve never bothered with that step. Instead, I simply run mkfs on the entire device (which would be /dev/sdj in the video).

Bob and Tony from HelpStream wrote me and asked “How can we get on this list?” That’s easy – all you need to do is ask, and I’ll do my best! They recently moved the complete running HelpStream (“The World’s First Truly Social CRM system”), all 140 clients and 90,000 users, over to Amazon EC2.

ZDNet recently chronicled this migration in a comprehensive and worthwhile story titled Migrating to Amazon Web Services: The Blueprint. In this story you can read about how Helpstream’s infrastructure was previously running at just 10% of capacity and how our prices were a selling point for them. The article covers phase 1 (using Amazon S3 for backups, and EC2 for test servers); phase 2 (moving about 85% of their storage over to S3), and phase 3 (moving the production system to EC2). The final step took them 5 hours over a weekend. This was time well spent since they estimate that the move will save them 21% on bandwidth and cage space, 59% on monitoring, server administration and in-cage work, and 100% on servers, switches, VPNs and other infrastructure which was obviated by the move to the cloud.

So you now understand Software-As-A-Service, Infrastructure-As-A-Service, and the various other “-As-A-Service” models that have been becoming increasingly popular of late. Great, because I’ve got another one for you. William from RetailZip wrote me early this month to tell me that their new product is a Format-As-A-Service!

RetailZip files are small, encrypted container file which provide gatewayed access to high-value online content. Once created and posted online, the content represented by a RetailZip file can be purchased online in any of 18 currencies. The content is stored on S3 and is decrypted and downloaded via EC2. Personal ($1.99 / month) and business ($9.99/month) licenses are available.

Kingsley from OpenLink Software wrote to tell me that they have released the Cloud Computing Edition of their Virtuoso Universal Server. As the press release notes, “The new product release leverages the solution packaging and deployment prowess of the Amazon EC2 cloud-computing platform by delivering a pre-configured and tightly tuned edition of Virtuoso on a Fedora Linux-based Amazon Machine Image (AMI), ready for immediate use (post initialization).”

Kingsley is intrigued by the ease with which researchers can now instantiate truly massive databases in the cloud and told me that “In all cases, analysts, researches, and knowledge/information workers in general now have the ability to instantiate knowledgebases in the EC2 Cloud. We are talking 1.5 hrs compared to error prone 16 – 22 hrs knowledgebase commissioning marathons that are inherently error prone.”

The brand-new Amazon Payments blog looks like it is going to be interesting. They say that “A number of authors will contribute on their respective areas of interest and expertise such as ecommerce, online shopping, merchant technologies, developers integrating payments into their projects, mobile payments and more.”

Billy Marshall from rPath wrote to tell me about their new video, Cloud Computing in Plain English. In just 5 minutes, this entertaining video will educate you about SaaS, Cloud Computing, Virtualization, and the relationship between them.

Cale Bruckner from Email Center Pro wrote to tell me that they’ve been using AWS to help companies of all sizes to do a better job of processing customer email. Their application allows companies to centralize emails, assign them to people for follow up, and to respond with greater efficiency using templates, internal notes, and other facilities (hmmmm, maybe I need this). Pricing starts at $19.00 per month after a free trial.

Earlier this year they wrote a long story about their architecture. They started out by storing messages in Amazon S3. This worked well, allowing them to keep their customer’s data safe and secure. They then moved the application itself over to EC2, building a set of AMIs which allow them to launch additional instances as needed to deal with peak traffic and high volumes of email. They conclude with the statement that “Email Center Pro is an example that you really can build an application entirely on the Amazon Web Services platform with great results.”

Ok, that should do it. Happy holidays everyone!

Modified 10/28/2020 – In an effort to ensure a great experience, expired links in this post have been updated or removed from the original post.