Cloud Computing and the world of GeoApps

Just like online social gaming , GeoApps is another emerging in-the-cloud meme. When I say GeoApps, I am referring to a wide variety of new and old ideas: Geographic Information Systems (GIS) for enterprises, geospatial applications, map-based mashups, geo-data visualization and mapping, Location-based Services (LBS), Location-aware mobile applications, Geo-Social Apps and anything and everything related to geo-technology.

This new world of GeoApps will be powered by the cloud. Whether it is serving ads from geo-located tweets to Mobile phones or analyzing and visualizing massive amounts of geo-data in real time or even playing geo-games with a group of friends at a particular location, these GeoApps are going to be the sweet spot for cloud computing.

I got interested in GeoApps in May 2007 when I experimented with MapCruncher. In 2008, I was impressed when I saw how voters were mapped on a country map during the President Obama Campaign using all open source tools and AWS. Last week, I presented at Location Intelligence GeoCloud conference. My presentation was titled “The Cloud as a Platform for GeoApps”. I researched and talked to several customers and partners and learnt that this world of GeoApps is on a verge of a perfect storm and feel that cloud will be fueling this perfect storm. 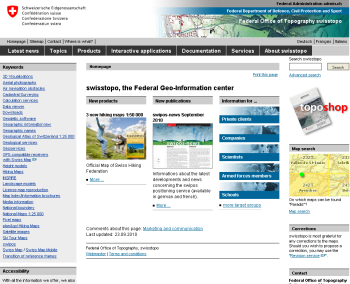 Swisstopo – The Swiss Federal Geo-Information Center
Swisstopo, The Swiss Federal Office of Topography, currently serves with its Amazon EC2 instances up to 30,000 unique visitors per day. This equates to data transfer of 8 TB per month; up to 1,300 delivered map tiles per second; 250,000,000 pre-produced map tiles in Amazon Simple Storage Service (Amazon S3); and 40 GIS applications with 40 Web map services for Swiss Federal offices, among other customers. Swisstopo estimates it is now possible for the team to launch a new server within hours, instead of the weeks or months it took before using AWS. Read the case study for more information. 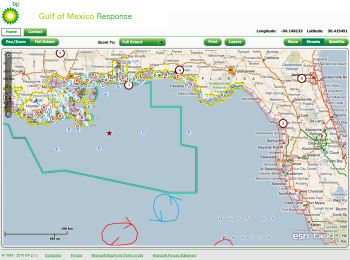 incident, The Joint Incident Command needed to have a publicly facing interactive website that would support the publics need to have a view into the response. Timeframe was extremely tight, and they had to deploy the idea to global deployment roughly in a week. www.Gulfofmexicoresponsemap.com was built using ArcGIS Server Standard version 9.3.1 on Amazon EC2. It leverages the Flex API which utilizes ArcGIS Online, Microsoft Bing, and Response Content (which is refreshed every 2 days). The website provided the public with a view into the response efforts showing the work that was being done to mitigate the environmental disaster.

Haiti Earthquake (ESRI and CrisisCommons)
The earthquake occurred on Jan 12th and the first satellite images were available Jan 13th. There were several  websites built in the cloud to facilitate emergency response efforts. ESRI also built an application to display up to the minute satellite images of the affected area. They were able to provision ArcGIS server on AWS in less than 2 hours. As a result, relief workers were able to quickly identify evacuation routes and get aid to the hardest hit areas. Likewise, CrisisCommons, a global network formed to help sustain the knowledge gained from CrisisCamps, also launched several communications sites (like wiki’s and blogs) on AWS Cloud to collaborate and co-ordinate on earthquake relief efforts.

HRSA.Gov Project UDSMapper.org (Solution built by Blue Raster, LLC)
Section 330 of the Public Health Service Act (HealthCare reform 2010) defines federal grant funding opportunities ($1Billion) for organizations to provide care to underserved populations. Its the Presidential initiative to double the number of Community Health Centers nationally from 1200 to 2400. HRSA and Robert Graham Center provide tools to these applicants (Community Health Centers) to assist them in the grant process. Blue Raster LLC, a government contractor specializing in Geospatial applications built a web mapping application that helps applicants to explore existing federally-qualified health center service areas, identify gaps in the safety net, and locate which neighborhoods or regions might hold the highest priorities for health center expansion and help them decide where to build the next new HealthCare facility. Blue Raster had built a highly available and redundant app hybrid-architecture leveraging several AWS services including AWS import export service to move first round of data and ESRI’s ArcGIS. They host the web mapping application on EC2 and utilize S3 as caching servers for Tile Caching. Michael Lippmann presented the entire solution at the conference and discussed economics ($300K in non-cloud solution v/s. $30K in the cloud) and architecture of this “perishable” website which was live only for 90 days after grant was announced. The static data website is at UDSMapper.org. Its was an interesting cloud-scale success story that used Amazon S3, EC2, CloudFront. They only had 48 hour notice before the grant was announced and hence they built all the necessary automation to not only bring up the infrastructure on-demand quickly but also to scale the resources dynamically to address the expected big spike of bidders after the announcement. 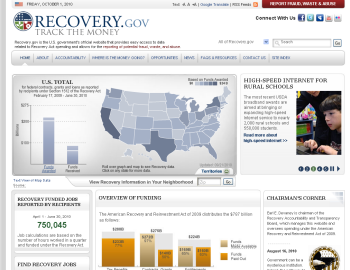 Recovery.gov Architecture (Mapping and Visualization provided by ESRI ArcGIS)
Recovery.gov provides a visual representation of the US with the distribution of stimulus funding in the form of contracts, loans and grants.  If you drill down into the top level map, there is a detailed map that allows you to see the funding and programs right down to an individual township.  For each contract, grant or load you can see the dollars that were spent and the jobs that were created. This visualization and geo-mapping was built using ESRI’s ArcGIS server.

Analyzing Carbon Density in the Amazon Rainforest
Rhiza Labs discussed how they used their product, Rhiza Insight, on Amazon EC2 to visualize and analyze carbon density of 600,000 acres of Surui Territory of the Amazon Rainforest. The project was executed in conjunction with Google Earth Outreach program and Amazon Conservation Team  in which Google gave handheld devices that has a GPS and Camera to the Sural Tribe so that they can take pictures of remote locations and get the current situation of Amazon Conservation. This pictures were then used to analyze carbon density. Josh Knauner, CEO of Rhiza labs, discussed the entire solution at the presentation and it was impressive.

ESRI
ESRI is one of our featured solution providers and in the frontline of geo-mapping, analysis, and visualization in the enterprise GIS space. The ArcGIS Server on Amazon EC2 product allows you to quickly set up a pre-configured instance in the cloud and get started. I highly recommend reading the whitepaper “GIS in the Cloud” if you would like to know more about the product.

FortiusOne (GeoCommons/Mapufacture)
FortiusOne acquired Mapufacture that runs on AWS. They provide set of products under the GeoCommons brand that provides collaboration and access to data, visualization and analytics. On the public web with GeoCommons, they allow anyone to upload and share open data (there are 40,000 or so datamaps today). Their customers then license the platform, GeoIQ, to combine their business data with open data. For example, they work with real estate companies to compare their appraisals and listings with demographic information, school ratings, and even social media. They deploy GeoIQ on Amazon EC2 and are moving the entire GeoCommons to AWS. I was very impressed at their pace of innovation and technical expertise.

eSpatial
eSpatial is one of emerging startups focused on providing GIS as a Service. They use Amazon EC2 and Oracle server and have built several platform services on top of AWS. They aim to provide GIS data and platform services to enterprise companies.

WeoGeo
WeoGeo provides geo-data library and marketplace  where data providers can upload and sell their data maps and have built a really cool self-healing auto-scalable platform on the top of AWS. The team is extremely smart and know the stuff really well. I have known them since 2006, when they first launched WeoCEO – Auto scaling service on EC2.  Just recently, Pitney  Bowes Business Insight (MapInfo) has agreed to license their services and platform. WeoGeo will be powering their GeoSK marketplace.

SimpleGeo
SimpleGeo is built on top of AWS. They aim to provide “iTunes for Geo-data” – anything that is related to a particular location. Geo Mobile application developers find it very simple to integrate with their APIs.

CloudMade
CloudMade, an innovative startup that sources all the mapping data from OpenStreetMap and provides several layers of geodata that can be mapped on the top of basic layer. They provide rich set of tools and API that can leverage different datasets like POI on OpenStreetMap.

Getting started on GeoApps in the cloud is easy. You can take advantage of several open source and commercial tools: ESRI’s ArcGIS Server, MapServer, GeoServer, and other OSGeo Products, TileDrawer AMI, MapTiler (and MapBox from DevelopmentSeed) are some great tools  for those who would like to get started with GeoApps. Read the essential skills required to succeed in a GIS career post to see what skills you need in order to enter the world of GeoApps.

Are you building a next-generation GeoApp in the AWS cloud that we should know ?