Forced Detach
From time to time an Elastic Block Storage (EBS) volume will refuse to cleanly detach itself from an EC2 instance. This can occur for several reasons, including continued system or user activity on the volume. Under normal circumstances you should always log in to the instance, terminate any processes that are reading or writing data to the volume, and unmount the volume before detaching it. If the volume fails to detach after you have taken all of these precautions, you can forcibly detach it. This is a last-resort option since there may still be some write operations pending for the volume. The console now includes a new option that allows you to forcibly detach a volume:

This function has been present in the EC2 APIs and in the command line tools for some time. You can now access it from the console.

Termination Protection
EC2 termination protection has been around for a while and is now accessible from the console:

Once activated for an EC2 instance, this feature blocks attempts to terminate an instance by way of the command line tools or the EC2 API. This gives you an extra measure of protection for those “precious” instances that you would prefer not to shut down by accident. For example, my primary EC2 instance has been running for 949 days and I would hate to terminate it by accident:

This is more for sentimental value than anything else, but I enjoy having this instance around from the early days of EC2. Here’s what happens if you try to terminate a protected instance: 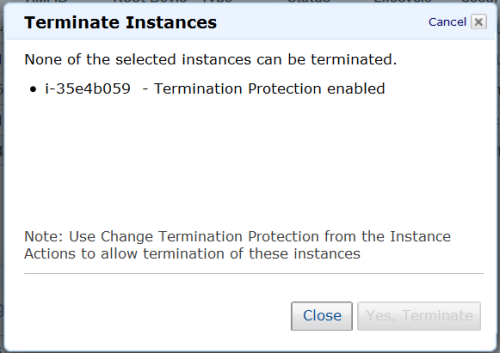