Precision medicine is tailored to individuals based on quantitative signatures, including genomics, lifestyle, and environment. It is often considered to be the driving force behind the next wave of human health. Through new initiatives and technologies such as population-scale genomics sequencing and IoT-backed wearables, researchers and clinicians in both commercial and public sectors are gaining new, previously inaccessible insights.

Many of these precision medicine initiatives are already happening on AWS. A few of these include:

Central to many of these initiatives is genomics, which gives healthcare organizations the ability to establish a baseline for longitudinal studies. Due to its wide applicability in precision medicine initiatives—from rare disease diagnosis to improving outcomes of clinical trials—genomics data is growing at a larger rate than Moore’s law across the globe. Many expect these datasets to grow to be in the range of tens of exabytes by 2025.

Genomics data is also regularly re-analyzed by the community as researchers develop new computational methods or compare older data with newer genome references. These trends are driving innovations in data analysis methods and algorithms to address the massive increase of computational requirements.

On October 19, 2017, Edico Genome partnered with the Children’s Hospital of Philadelphia (CHOP) to demonstrate their FPGA-accelerated genomic pipeline software, called DRAGEN. It can significantly reduce time-to-insight for patient genomes, and analyzed 1,000 genomes from the Center for Applied Genomics Biobank in the shortest time possible. This set a Guinness World Record for the fastest analysis of 1000 whole human genomes, and they did this using 1000 EC2 f1.2xlarge instances in a single AWS region. Not only were they able to analyze genomes at high throughput, they did so averaging approximately $3 per whole human genome of AWS compute for the analysis. 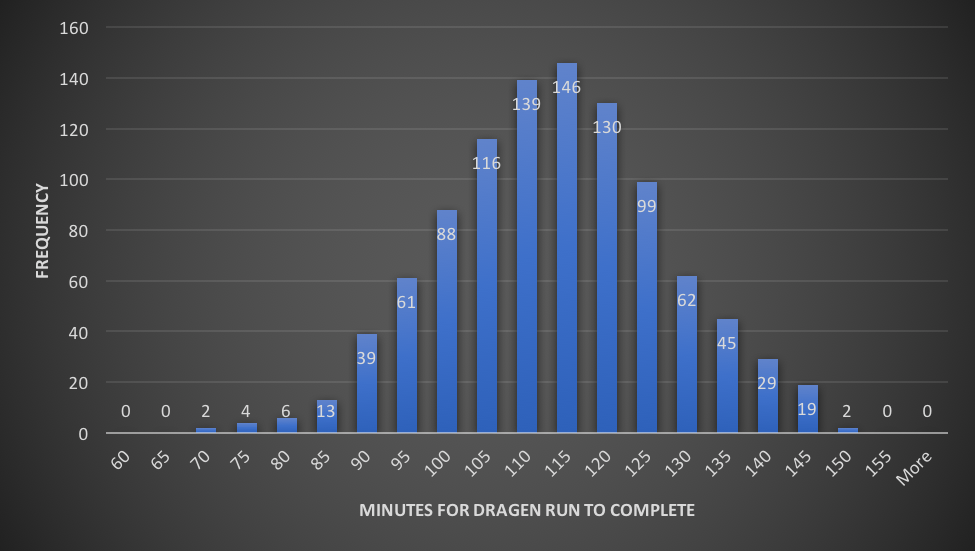 The version of DRAGEN that Edico Genome used for this analysis was also the same one used in the precisionFDA Hidden Treasures – Warm Up challenge, where they were one of the top performers in every assessment.

In the remainder of this post, we walk through the architecture used by Edico Genome, combining EC2 F1 instances and AWS Batch to achieve this milestone.

Edico Genome used 1,000 EC2 F1 instances to help their customer, the Children’s Hospital of Philadelphia (CHOP), to process and analyze all 1,000 whole human genomes in parallel. They used AWS Batch to provision compute resources and orchestrate DRAGEN compute jobs across the 1,000 EC2 F1 instances. This solution successfully addressed the challenge of creating a scalable genomic processing pipeline that can easily scale to thousands of engines running in parallel.

A simplified view of the architecture used for the analysis is shown in the following diagram: 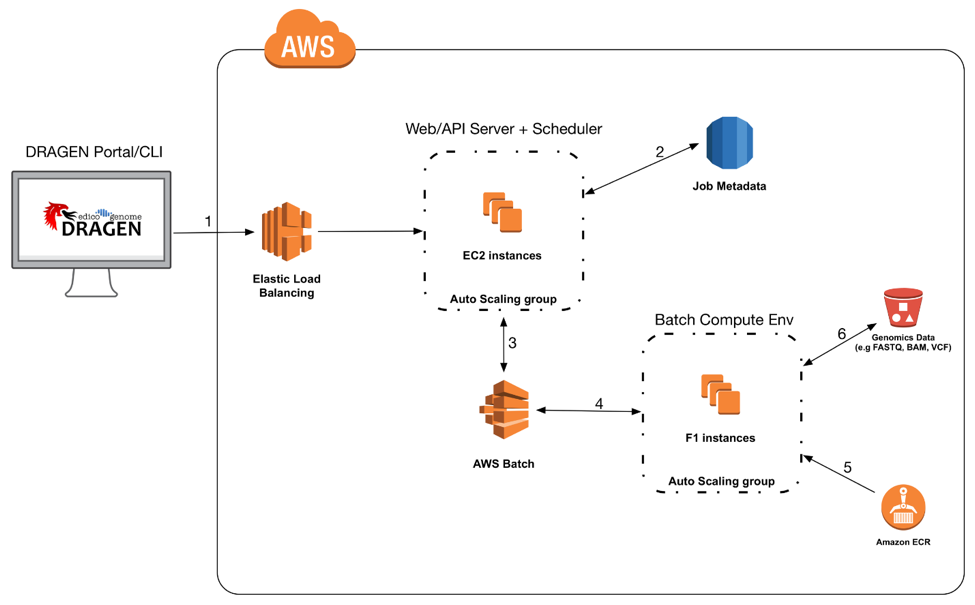 The steps listed previously can also be bucketed into the following higher-level layers:

We also covered these concepts previously in the Building High-Throughput Genomics Batch Workflows on AWS series on the AWS Compute blog.

In the following sections, we dive deeper into several tasks that enabled Edico Genome’s scalable FPGA genome analysis on AWS:

In brief, you need a modern Linux distribution (3.10+), Amazon ECS Container Agent, awslogs driver, and Docker configured on your image. There are additional recommendations in the Compute Resource AMI specification.

You can use any Amazon Machine Image (AMI) or Amazon FPGA Image (AFI) with AWS Batch, provided that it meets the Compute Resource AMI specification. This gives you the ability to customize any workload by increasing the size of root or data volumes, adding instance stores, and connecting with the FPGA (F) and GPU (G and P) instance families.

Next, install the AWS CLI:

Add any additional software required to interact with the FPGAs on the F1 instances.

As a starting point, AWS publishes an FPGA Developer AMI in the AWS Marketplace. It is based on a CentOS Linux image and includes pre-integrated FPGA development tools. It also includes the runtime tools required to develop and use custom FPGAs for hardware acceleration applications.

For more information about how to set up custom AMIs for your AWS Batch managed compute environments, see Creating a Compute Resource AMI.

There are two common methods for connecting to AWS Batch to run FPGA-enabled algorithms. The first method, which is the route Edico Genome took, involves storing your binaries in the Docker container itself and running that on top of an F1 instance with Docker installed. The following code example is what a Dockerfile to build your container might look like for this scenario.

Note: Edico Genome’s custom Python wrapper functions for its Workflow Management System (WFMS) in the latter part of this Dockerfile should be replaced with functions that are specific to your workflow.

The second method is to install binaries and then use Docker as a lightweight connector between AWS Batch and the AFI. For example, this might be a route you would choose to use if you were provisioning DRAGEN from the AWS Marketplace.

In this case, the Dockerfile would not contain the installation of the binaries to run DRAGEN, but would contain any other packages necessary for job completion. When you run your Docker container, you enable Docker to access the underlying file system.

AWS Batch provisions compute resources and runs your jobs, choosing the right instance types based on your job requirements and scaling down resources as work is completed. AWS Batch users submit a job, based on a template or “job definition” to an AWS Batch job queue.

Job queues are mapped to one or more compute environments that describe the quantity and types of resources that AWS Batch can provision. In this case, Edico created a managed compute environment that was able to launch 1,000 EC2 F1 instances across multiple Availability Zones in us-east-1. As jobs are submitted to a job queue, the service launches the required quantity and types of instances that are needed. As instances become available, AWS Batch then runs each job within appropriately sized Docker containers.

The Edico Genome workflow manager API submits jobs to an AWS Batch job queue. This job queue maps to an AWS Batch managed compute environment containing On-Demand F1 instances. In this section, you can set this up yourself.

To create the compute environment that DRAGEN can use:

Where your JSON file contains the following code (replace with your own resource IDs):

And the corresponding job queue:

Where dragen.json is as follows:

An f1.2xlarge EC2 instance contains one FPGA, eight vCPUs, and 122-GiB RAM. As DRAGEN requires an entire FPGA to run, Edico Genome needed to ensure that only one analysis per time executed on an instance. By using the f1.2xlarge vCPUs and memory as a proxy in their AWS Batch job definition, Edico Genome could ensure that only one job runs on an instance at a time. Here’s what that looks like in the AWS CLI:

Now, you can submit jobs easily to your DRAGEN environment:

You can query the status of your DRAGEN job with the following command:

The logs for your job are written to the /aws/batch/job CloudWatch log group.

In this post, we demonstrated how to set up an environment with AWS Batch that can run DRAGEN on EC2 F1 instances at scale. If you followed the walkthrough, you’ve replicated much of the architecture Edico Genome used to set the Guinness World Record.

There are several ways in which you can harness the computational power of DRAGEN to analyze genomes at scale. First, DRAGEN is available through several different genomics platforms, such as the DNAnexus Platform. DRAGEN is also available on the AWS Marketplace. You can apply the architecture presented in this post to build a scalable solution that is both performant and cost-optimized.

For more information about how AWS Batch can facilitate genomics processing at scale, be sure to check out our aws-batch-genomics GitHub repo on high-throughput genomics on AWS.