Developers building container-based applications can now discover and download Docker Official Images directly from Amazon Elastic Container Registry (Amazon ECR) Public. This new capability gives AWS customers a simple and highly available way to pull Docker Official Images, while taking advantage of the generous AWS Free Tier. Customers pulling images from Amazon ECR Public to any AWS Region get virtually unlimited downloads. For workloads running outside of AWS, users not authenticated on AWS receive 500 GB of data downloads each month. For additional data downloads, they can sign up or sign in to an AWS account to get up to 5TB of data downloads each month after which they pay $0.09 per GB.

Docker Official Images are a curated set of container images published by Docker. Some examples of these images include base OS (for example Ubuntu and CentOS), databases (for example MySQL and Redis), and sidecars that are the starting point for container-based applications. Until today, customers using Docker Official Images could only find these images on Docker Hub, a container registry hosted by Docker.

Launched in December 2020, Amazon ECR Public is a fully managed public registry that makes it easy for a developer to publicly share container software worldwide for anyone to download. In the gallery, you can find popular base images including operating systems, AWS-published images, Kubernetes add-ons, and artifacts, such as Helm charts. While you don’t need to use an AWS account to discover or pull a public image, using your account increases the data bandwidth limits and makes it easier to use public container software. 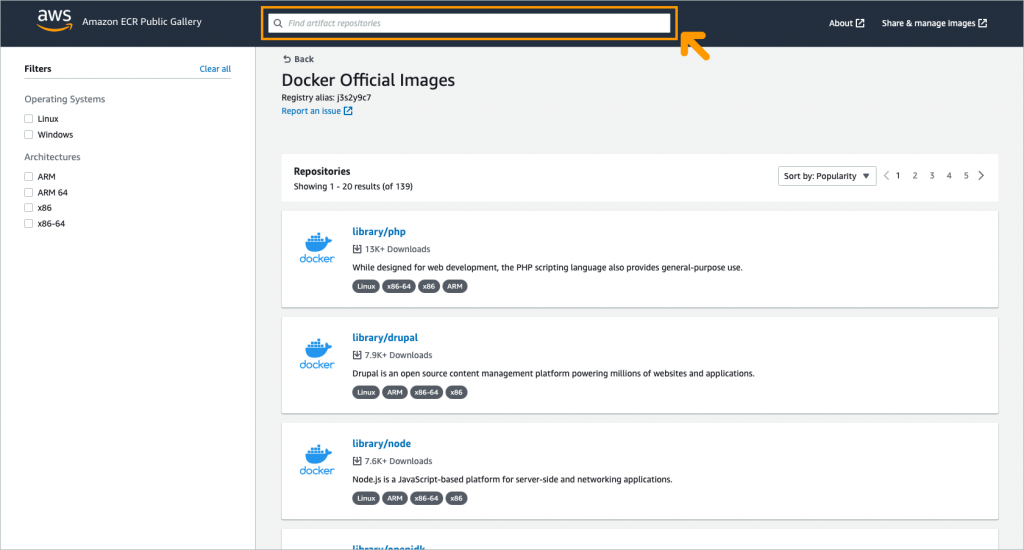 You pull these images from Amazon ECR Public using the familiar docker pull command with the Universal Resource Identifier (URI) of the image. You can find this URI on the repository page on Amazon ECR Public. The image URI is displayed along with other published information, including verified publisher badge for Docker. The following image illustrates how selecting the URI copies the image URI to your clipboard.

Get started today by visiting the Amazon ECR Public gallery at to explore and use Docker Official Images and other public container software.