At AWS, we are continually looking to improve customer experience by reducing complexity. Our customers want to spend more time solving business problems and less time maintaining infrastructure. Two years ago, we launched Amazon EKS to make it easy for you to operate Kubernetes clusters. And last year, at re:Invent 2019, we announced support for EKS on Fargate. This feature allows you to run Kubernetes pods without creating and managing EC2 instances.

Customers often ask, “Can I monitor my pods running on Fargate using Prometheus?”

Yes, you can use Prometheus to monitor pods running on Fargate. We’ll take a more in-depth look at how pods run on Fargate and where the relevant Prometheus metrics originate.

AWS Fargate is a serverless compute engine for containers that works with both Amazon Elastic Container Service (ECS) and Amazon Elastic Kubernetes Service (EKS). When you run your Kubernetes workload on Fargate, you don’t need to provision and manage servers. With Fargate, you can get the right amount of compute to run your containers. If you can run your containers on Fargate, you can avoid having to size EC2 instances for your workload. Fargate allows you to specify and only pay for resources your application needs. You need to know how much vCPU and memory your application pod needs, and Fargate will run it. And if you right-size your pods, then you can use tools like right-size-guide and Goldilocks vertical-pod-autoscaler. And scaling pods horizontally is also easier with Fargate; as the horizontal pod autoscaler creates new replicas, Fargate will create nodes for the new pods.

EKS allows you to choose where you obtain compute capacity from (EC2 or Fargate) on a per-pod basis. You can either run all the pods in a namespace on Fargate or specify a label for pods you want to run on Fargate. You can have a cluster where some pods run on EC2 while others run on Fargate.

You can declare which pods run on Fargate using the Fargate profile. Along with specifying which Kubernetes namespaces and labels should require Fargate capacity, you can also define from which subnets the pods will get their IP address.

As an additional benefit, pods on Fargate get their own VM-isolated environment, which means your pods do not share kernel, CPU, memory, and network interface with any other pods. Fargate runs Kubernetes processes like kubelet, kubeproxy, and containerd along with the pod. If you have five pods running on Fargate, and you run kubectl get nodes, you will see five worker nodes, one for each pod. If you run an EKS cluster that also runs kube-system pods also on Fargate, then you will also see nodes for CoreDNS as well.

Consider declaring vCPU and memory requests irrespective of whether you use Fargate or EC2. It will enable Kubernetes to ensure that at least the requested resources for each pod are available on the compute resource.

Given the way Fargate allocates resources, a pod will get total memory requested in containers (individual Init containers or the sum of all the long-running containers, whichever is more) + 256 MB rounded to the next Fargate configuration (see the table below). For example, if you request 3.5 GB of memory, Fargate will allocate 4 GB memory: 3.5 GB + 250 MB rounded up. If you don’t declare any values for memory, then Fargate will allocate 0.5GB. The containers in your pod will be able to use all the available memory unless you specify a memory limit in your containers.

You can determine the size of the Fargate node that runs a pod by checking the pod’s annotations:

Having understood what to measure, let’s now explore how it can be measured.

In Kubernetes, the Prometheus server runs as a pod that is responsible for scraping metrics from metrics endpoints.

To measure a pod’s performance on Fargate, we need metrics like vCPU, memory usage, and network transfers. Prometheus collects these metrics from two sources: cAdvisor and kube-state-metrics.

cAdvisor (short for container advisor) analyzes and exposes resource usage and performance data from running containers on a node. In Kubernetes, cAdvisor runs as part of the Kubelet binary. You can use kubectl to view the metrics generated by cAdvisor:

cAdvisor provides node and pod usage statistics that are useful in understanding how a pod is using its resources. Here are the metrics it exposes:

cAdvisor also exposes the total CPU and memory of the node. For example, I scheduled a pod on Fargate and requested 200m vCPU.

As reflected in the metrics, the Fargate node that runs my pod has 2 vCPUs and 4GiB RAM. This can be a bit confusing.

Even though the node has 2vCPUs and 4GiB RAM, my pod is limited to 200m (or 0.25 vCPU, 0.5GiB RAM if no requests are configured). I am being billed for the resources that the pod uses and not for the rest of the unused capacity on the Fargate node.

Once Fargate uses Firecracker microVMs, the compute resources of the microVM will closely match the requirements of the pod running on Fargate. Until then, you should expect to see unused capacity on your Fargate nodes even though you are not responsible for its cost.

Most Grafana dashboards intended for pod monitoring use the following metrics generated by cAdvisor:

While some Grafana dashboards for monitoring pod usage are based on cAdvisor metrics only, others combine metrics from other sources like kube-state-metrics.

kube-state-metrics is an open source project that is responsible for listening to the Kubernetes API server and generating metrics. It creates a Kubernetes service and exposes metrics in Prometheus text format. It collects metrics for the following resources:

It creates a service that listens on port 8080, and you can use kubectl to see all the metrics it exposes.

Prometheus gives us the complete picture by combining data collected from cAdvisor and kube-state-metrics. Let’s review some helpful Grafana dashboards for monitoring pods running on Fargate.

Before we can schedule pods on Fargate, we must define a Fargate profile which specifies what pods should use Fargate as they are launched.

The Fargate profile allows an administrator to declare which pods run on Fargate. This declaration is done through the profile’s selectors. Each profile can have up to five selectors that contain a namespace and optional labels. You must define a namespace for every selector. The label field consists of multiple optional key-value pairs. Pods that match a selector (by matching a namespace for the selector and all of the labels specified in the selector) are scheduled on Fargate. If a namespace selector is defined without any labels, Amazon EKS will attempt to schedule all pods that run in that namespace onto Fargate using the profile. If a to-be-scheduled pod matches any of the selectors in the Fargate profile, then that pod is scheduled on Fargate. 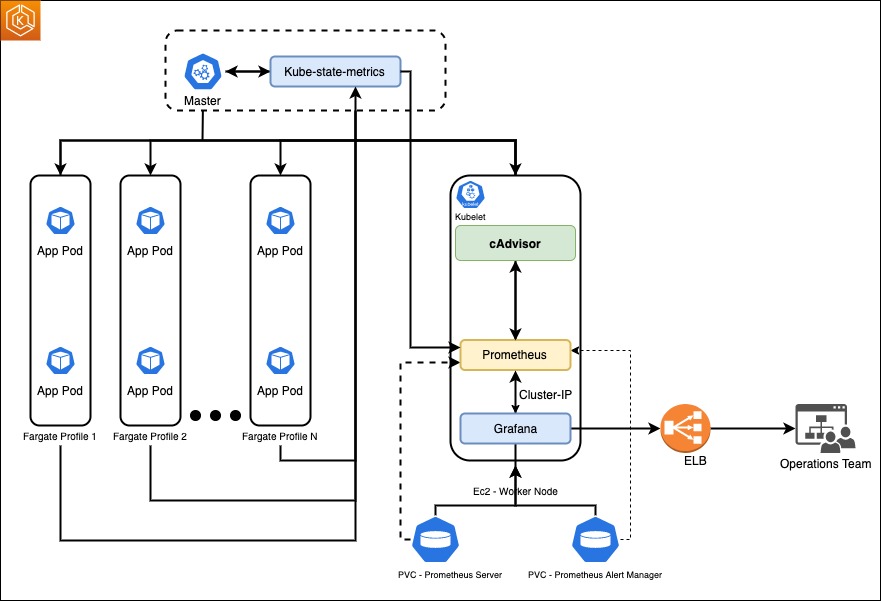 If you don’t have an EKS cluster, you can use eksctl to create one. You can use this template to create a cluster that schedules all pods in the default namespace on Fargate:

We will use Helm to install the components required to run Prometheus. If you don’t have Helm installed, please see Using Helm with Amazon EKS. Add these repositories:

Create a namespace for Prometheus:

Prometheus needs two EBS-backed persistent volumes: one for prometheus-server and another for prometheus-alertmanager. Because EBS volumes are accessible within a single Availability Zone (AZ), we must determine the AZs in which our cluster’s worker nodes exist. We will configure the storage class to create EBS volumes in the same AZ as the node.

Get the Availability Zone of one of the worker nodes:

Verify that Prometheus pods are running:

The prometheus-server service provides Prometheus’ API and user interface. This is the service that Grafana will use to fetch Prometheus metrics.

Download the values file for the Grafana Helm chart:

The chart creates a 5Gi persistent volume for Grafana and a LoadBalancer service for the UI. Get the load balancer’s DNS name:

Open Grafana UI in your browser: 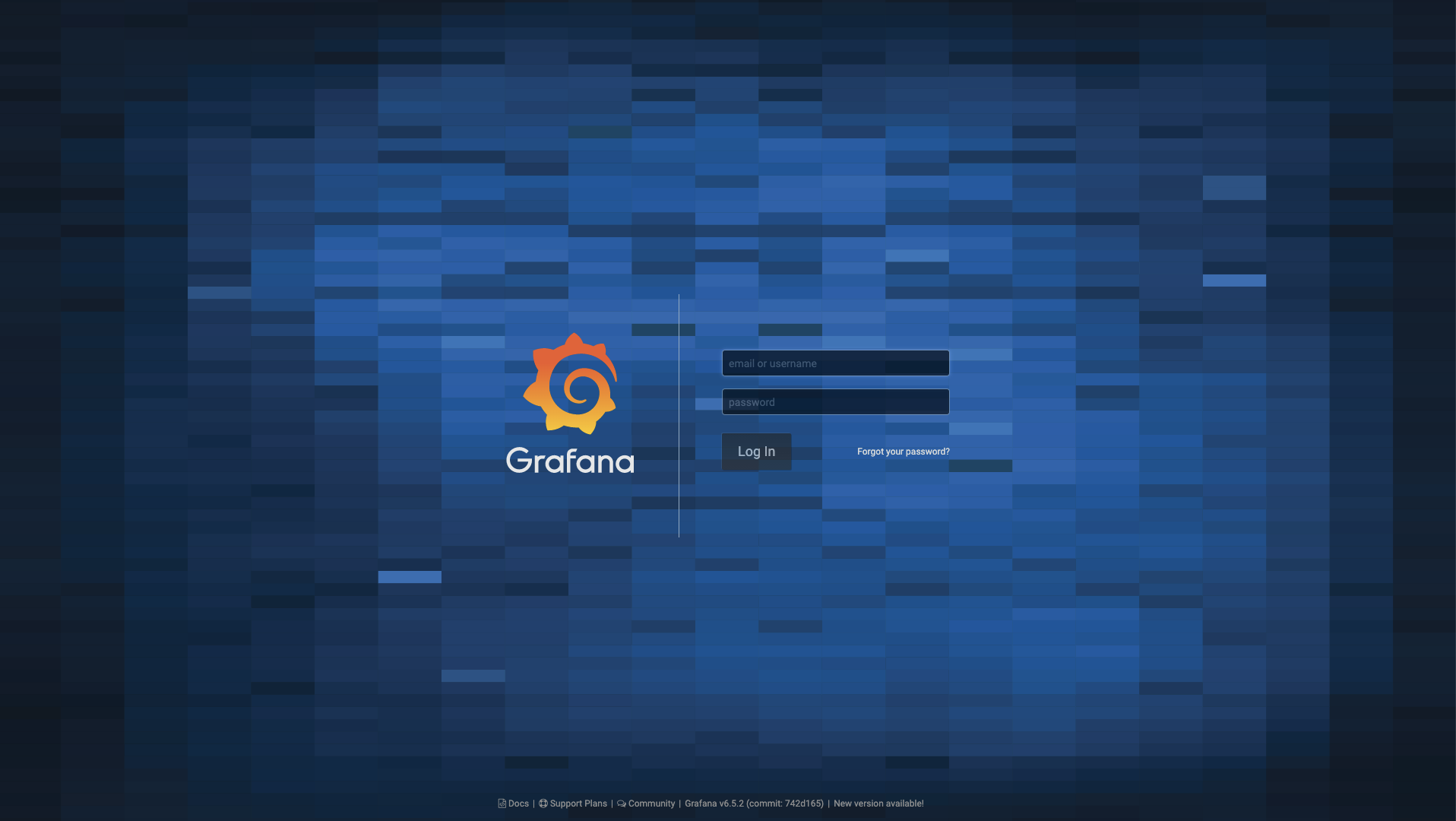 Login to using username admin. You can use kubectl to retrieve the password stored as a Kubernetes secret: 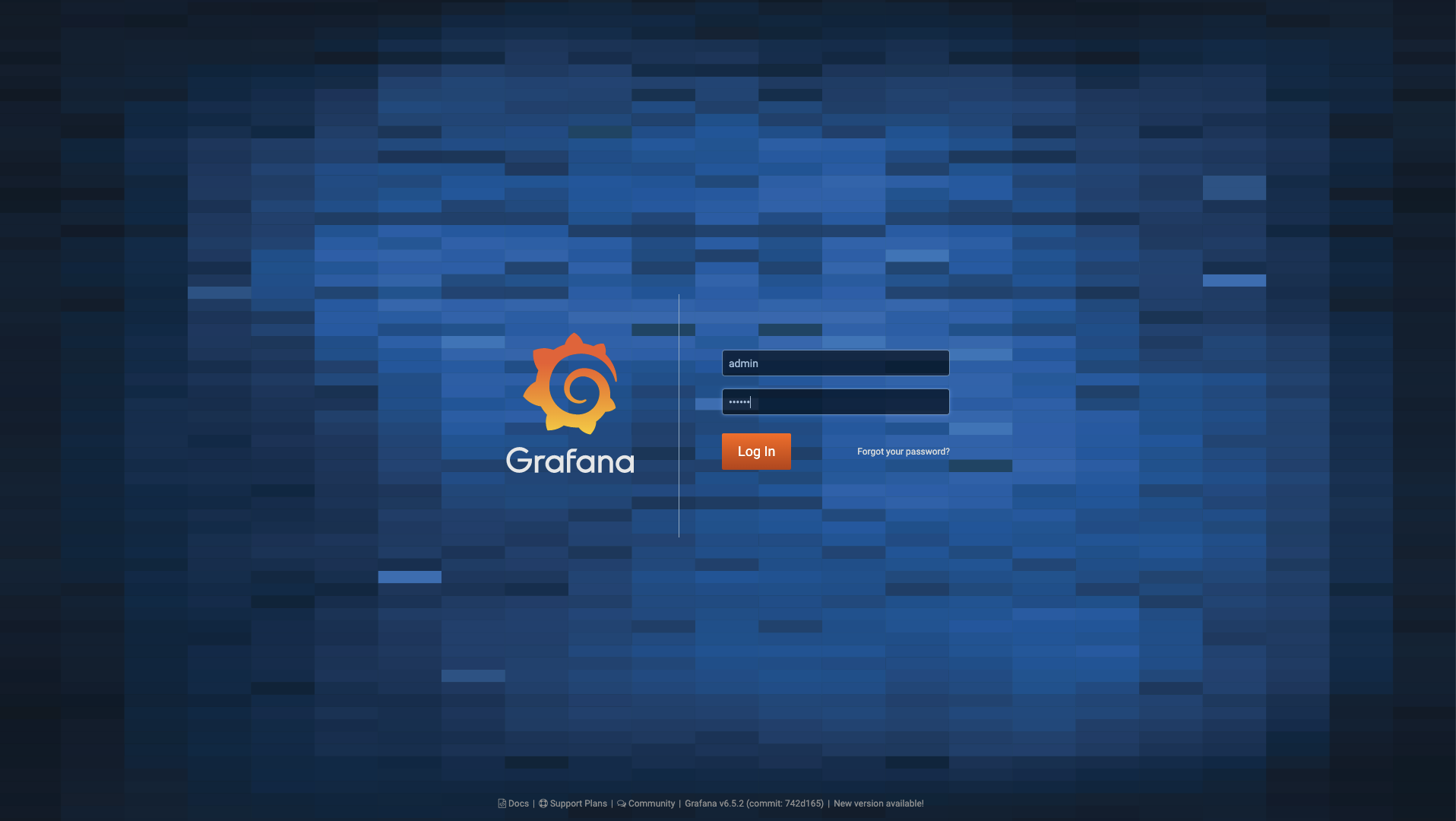 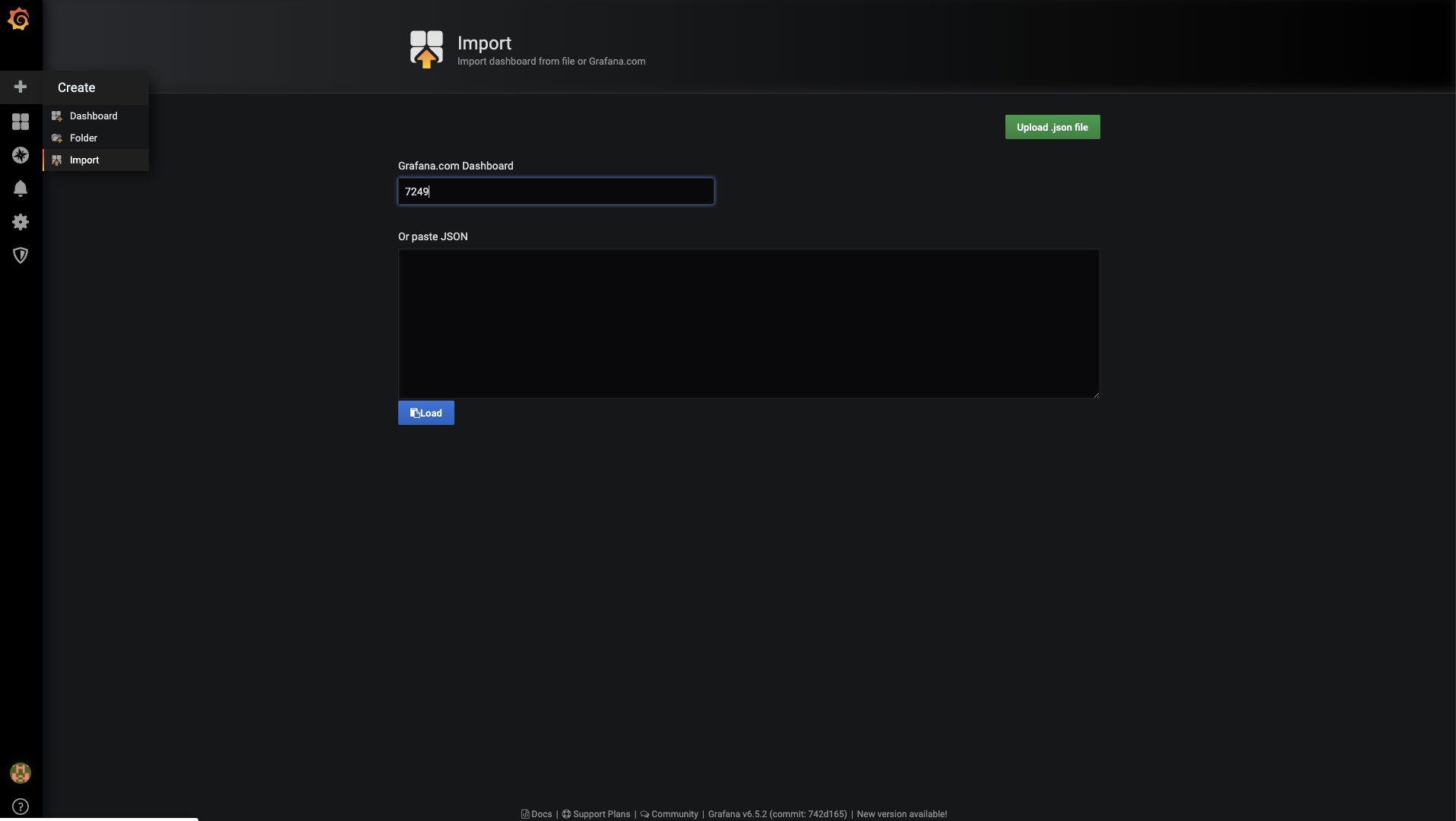 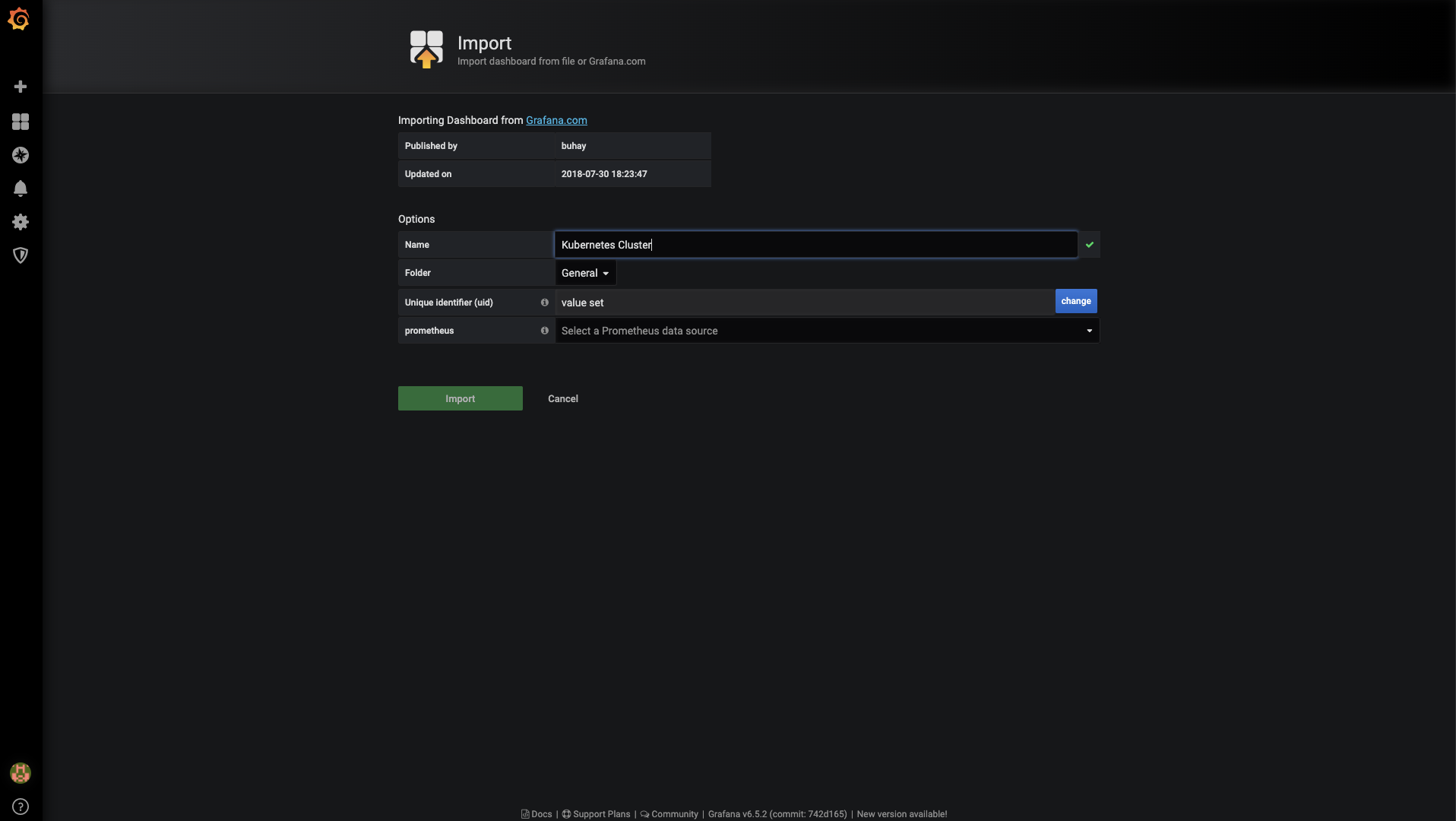 This dashboard gives a cluster level overview of the workloads deployed based on Prometheus metrics.

If you already have pods running on Fargate, you will see them in the dashboard. If you don’t have any existing workloads, you can deploy a sample application:

The result should be this:

With this setup, we can monitor pod memory usage as shown.

Similarly, we can calculate the CPU usage as shown below.

We have created Grafana Dashboard 12421 to track CPU and memory usage against requests. 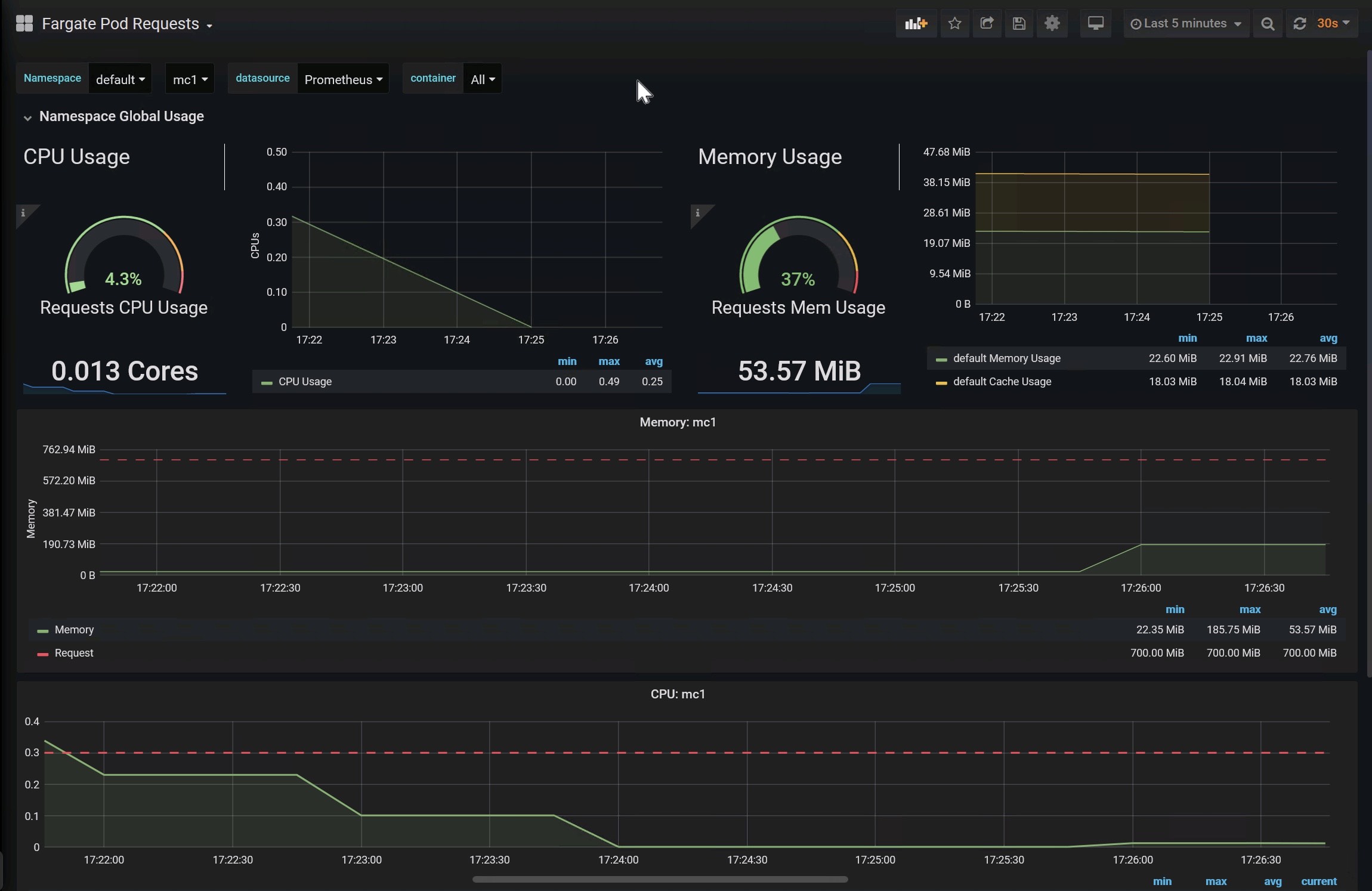 The formula it uses for calculating CPU usage is:

The formula for calculating memory usage is:

The syntax has been modified for legibility.

The current version of the dashboard doesn’t consider initContainers’ requests. This is because kube-state-metrics doesn’t expose resources requested by initContainers.

The requests metric in the graph will be absent if none of the long-running containers request any resources. The request metric should not be confused with the total CPU and memory the pod has at its disposal. The pod’s CPU and memory is determined by the calculated Fargate configuration of the pod, as explained above.

Here are some common metrics used in pod monitoring dashboard and the source of the metric:

As demonstrated, the inability to run node-exporter as a DaemonSet in Fargate doesn’t impede the ability to monitor Kubernetes workloads running on Fargate. Metrics provided by cAdvisor and kube-state-metrics are sufficient for monitoring pods on Fargate.

With Fargate, it’s important to implement requests in your containers. Otherwise, you will get the Fargate default configuration profile, and you wouldn’t be able to measure the performance of your applications correctly.