Achieving complete isolation between multiple tenants running in the same Kubernetes cluster is impossible today. The reason is because Kubernetes was designed to have a single control plane per cluster and all the tenants running in the cluster, share the same control plane. Hosting multiple tenants in a single cluster brings some advantages, the main ones being: efficient resource utilization and sharing, reduced cost, and reduced configuration overhead.

However, a multi-tenant Kubernetes setup creates some special challenges when it comes to resource sharing and security. Let’s understand these better. In a shared cluster, one of the goals is for each tenant to get a fair share of the available resources to match its requirements. A possible side effect that needs to be mitigated in this case is the noisy neighbor effect, by ensuring the right level of resource isolation among tenants. The second challenge, the main one, is security. Isolation between tenants is mandatory in order to avoid malicious tenants compromising others. Depending on the security level implemented by the isolation mechanisms, the industry divides the shared tenancy models into hard and soft multi-tenancy.

Hard multi-tenancy implies no trust between tenants and one tenant cannot access anything from others. This approach fits, for example, to service providers that host multiple tenants, which are unknown to each other and the main focus for this setup is to completely isolate the business among tenants. In the open-source community, there is ongoing work to solve this challenge, but this approach is not widely used across production workloads yet.

On the other end of the spectrum, is soft multi-tenancy. This implies a trust relationship between tenants, which could be part of the same organization or team, and the main focus in this approach is not the security isolation but the fair utilization of resources among tenants.

Before proceeding with the setup, make sure you fulfill the following pre-requisites:

In order to demonstrate how to set up Kiosk on Amazon EKS the following architecture will be deployed, depicting a single Kubernetes cluster shared between two tenants: a Node.js application and a Redis data store. 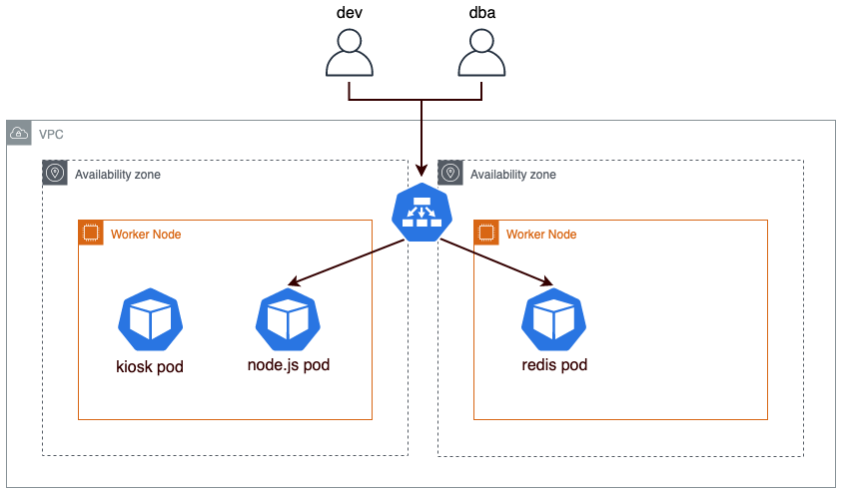 Before starting with the setup, here are some of the basic building blocks of Kiosk:

Account, space, account quota, template, and template instance are custom resources created in the cluster when the kiosk chart is installed. Granular permissions can be added to these resources, and this enables tenant isolation.

1. Verify that you can view the worker nodes in the node group of the EKS cluster. The EKS cluster used in this guide consists of 3 x m5.large (2 vCPU and 8 GiB) instances.

2. Create a dedicated namespace and install Kiosk using helm. Helm is a package manager for Kubernetes.

This step creates a pod in the kiosk namespace.

You will create two IAM (Identity and Access Management) users dev and dba, each managing a separate tenant. Because EKS supports integration of Kubernetes RBAC (Role-Based Access Control) with the IAM service through the AWS IAM Authentication for Kubernetes, the next step is to add RBAC access to the two users.

1. Create the users dev and dba by following these steps. Because the IAM service is used for authentication only, you don’t need to grant any permissions during the user creation. Permissions for each user in the Kubernetes cluster will be granted through the RBAC mechanism in the next steps.

The IAM user that created the EKS cluster in the initial setup phase is granted automatically administrator permissions for the cluster so you will use it as a cluster admin in this guide. If IAM access keys have not been created already for the cluster admin, then follow these steps to do so and include them under the kube-cluster-admin named profile in the credentials file as described here.

Note: all commands in this guide will be executed as a cluster admin unless explicitly stated in the kubectl command. To use the cluster admin IAM credentials, override the AWS_PROFILE environment variable.

2. Add RBAC access to the two users by updating the aws-auth ConfigMap.

3. Add the two users under data.mapUsers. The user ARN can be copied from the IAM console.

Note: the IAM entity that creates the cluster is automatically granted system:masters permissions in the cluster’s RBAC configuration. Users dev and dba will have read-only permissions by default, as they haven’t been added to any group.

1. Create a definition file for the Node.js application’s account.

3. Repeat the step for the Redis application. Update the metadata.name to redis-account and spec.subjects[0].name to dba.

4. View the created accounts as a cluster admin.

5. View the created accounts as user dev. You will have access to view only the accounts associated to this user.

1. By default, only the cluster admin can create spaces. In order to allow an account user to create spaces, create a Kubernetes RBAC ClusterRoleBinding. Let’s allow users dev and dba to create spaces in their accounts.

Note: kiosk-edit is a ClusterRole created when the chart for kiosk was installed in the cluster and allows create, update, and delete actions on space resources by the subjects included in the ClusterRoleBinding configuration. The full configuration of the kiosk-edit role can be seen by running:

2. Create the ClusterRoleBinding as a cluster admin.

3. Create a space for the Node.js application. First, create the definition file.

4. Impersonate user dev to create the space for the node-account.

5. Repeat the step for the Redis application. Update metadata.name to redis-space and spec.account to redis-account.

6. Note that trying to create the space in the redis-account as user dev will result in an error.

7. View the current spaces as a cluster admin. You will see both node-space and redis-space.

8. View the current spaces as user dev. Note that you only have access to the spaces owned by user dev, which in this case is node-space belonging to node-account.

9. Spaces are a virtual representation of Kubernetes namespaces, so the same syntax can be used in the command line. For example, to list all pods in a space:

Apply restrictions on the Kiosk accounts

1. Limit the number of spaces that can be associated to an account. Let’s update the definition file node-account.yml and add the space limit.

2. Apply the changes to the node-account as a cluster admin.

Now the node-account can only have two spaces. When attempting to create a third space, an error will be thrown.

3. Apply the same limit for the second account by updating the definition file redis-account.yml.

1. Define the limits of compute resources for an account by defining account quotas. Create the quota definition file.

AccountQuotas are very similar to the Kubernetes resource quotas by restricting the same resources, with the added benefit that the restrictions apply across all spaces of the account unlike the resource quotas, which apply to a single namespace.

3. AccountQuotas can be created by cluster admins only. Trying to create an account quota as an account user, results in an error.

4. View the account quotas across the cluster as a cluster admin.

1. A template in kiosk serves as a blueprint for a space. Templates are defined and managed by cluster admins by default.

2. Let’s create a template to limit every container deployed in this space to be assigned CPU request of 500 milli CPUs and a CPU limit of 1 CPU.

3. Create the template as a cluster admin.

5. Apply the changes to the account as a cluster admin.

6. Let’s test this by creating a space within the redis-account.

7. Create the space as a cluster admin.

8. Once the space is created, you can view that the LimitRange resource has been created.

10. To test that the template is enforced, you can deploy a test pod in the new space and verify if the limit ranges are applied.

11. Check the pod configuration and verify the resource limits applied.

12. Delete the pod to continue the setup.

Deploy applications in the two accounts

1. Because an account quota has been created for node-account, the required compute resources need to be specified in the definition file of the deployment.

2. Deploy the Redis data store in the second account as user dba.

2. Check if the account user dev has access to any resources in the redis-space. You will get plenty of errors.

1. Verify the pod in the node-account. Note the name of the pod.

2. Verify the pod in the redis-account. Note the IP address of the pod.

3. Test the connection between the two pods.

You can see that the tenants are accessible across spaces. For more strict security controls, the native Kubernetes Network Policies and Pod Security Policies can be leveraged.

Multi-tenancy in Kubernetes is a hot topic in the open source community these days due to the evolution of the platform and the complexity that this feature brings in the implementation. To get the latest updates, you can follow the Kubernetes multi-tenancy Special Interest Group community at kubernetes-sigs/multi-tenancy.

In this post, you have seen how easy it is to set up soft multi-tenancy in a single Kubernetes cluster with Kiosk and the added benefits over the native Kubernetes functionality. You achieved resource isolation across the cluster through account quotas and implemented security boundaries through primitives like accounts, account users, and spaces.