Today, we released version 1.8 of the AWS Toolkit for Visual Studio. For this release, we revamped our wizard to deploy your ASP.NET Applications. Our goal was to make deployment easier as well as take advantage of some of the new features AWS Elastic Beanstalk has added.

What happened to the AWS CloudFormation deployments?

Unlike the new deployment wizard, the previous wizard had the option to deploy using the Load Balanced and Single Instance Templates, which would deploy using AWS CloudFormation templates. This deployment option was added before we had Elastic Beanstalk, which has since added features that make these deployment templates obsolete. If you still need access to this deployment mechanism, on the first page of the new wizard you can choose to relaunch the legacy wizard.

AWS Identity and Access Management roles are an important way of getting AWS credentials to your deployed application. With the new wizard, you can select an existing role or choose to create a new role based on a number of role templates. It is easy in the new wizard to set up a new role that gives access to Amazon S3 and DynamoDB. After deployment, you can refine the role from the AWS Explorer.

The application options page has several new features. You can now choose which build configuration to use. You can also set any application settings you want to be pushed into the web.config appSettings section when the application is being deployed.

In the previous deployment wizard, applications were deployed to a sub-folder in IIS based on the project name with the suffix “_deploy”. It appeared as if it was deployed at the root because URL rewrite rules were added to the root. This worked for most cases, but there are some edge cases where this caused problems. With the new wizard, applications can be configured to deploy at any folder and by default it will be deployed at the root folder of IIS. If the application is deployed to anywhere other then the root, the URL rewrite rules are added to the root. 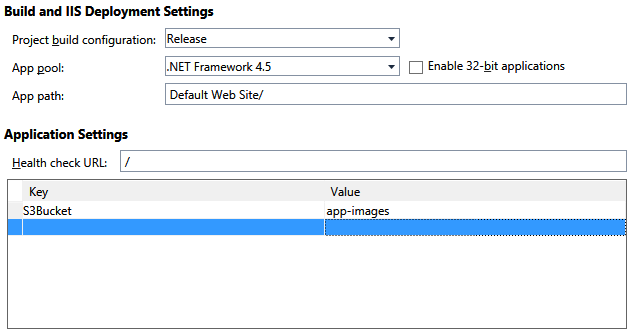 We hope that you like the new wizard and that it makes things easier for you. For a full walk through of the new wizard check out the user guide for the AWS Toolkit for Visual Studio. We would love to hear your feedback on the new wizard. We would also love to hear about any interesting deployment issues you have and where you would like help from AWS .NET tooling.