In November 2017, we launched AWS Amplify, initially an open-source JavaScript library that makes it easier to develop cloud-connected mobile and web apps—and AWS AppSync, for creating a real-time and offline-capable data-layer API for your mobile and web apps. In the last 12 months, we’ve introduced significant additional capabilities for both AWS Amplify and AWS AppSync.

In August 2018, we launched the AWS Amplify command line interface (CLI). The Amplify CLI makes it easier to provision and maintain app backends, and integrate them into iOS, Android, React Native, and web apps. We also extended the AWS Amplify library from its React beginnings to include support for Angular, Ionic, and Vue. With these launches and the help of the community, AWS Amplify has become a complete, open-source client framework.

One of the consistent pieces of feedback that we’ve heard is that it’s hard to find information about modern app development because it’s fragmented across numerous service documentations, GitHub, and samples.  Today, we recognize the critical role that AWS Amplify plays in cloud-connected mobile and web application development. We’re consolidating mobile and web client development resources in a single place as part of AWS Amplify.

The heart of AWS Amplify remains the open source client framework, now referred to as the Amplify Framework. To further extend the capabilities of AWS Amplify, we’re also introducing the AWS Amplify Console for deploying and hosting web apps.

What is AWS Amplify?

AWS Amplify is a powerful framework and toolset that enables you to write modern UI-driven and scalable client-server applications across all major languages and platforms. 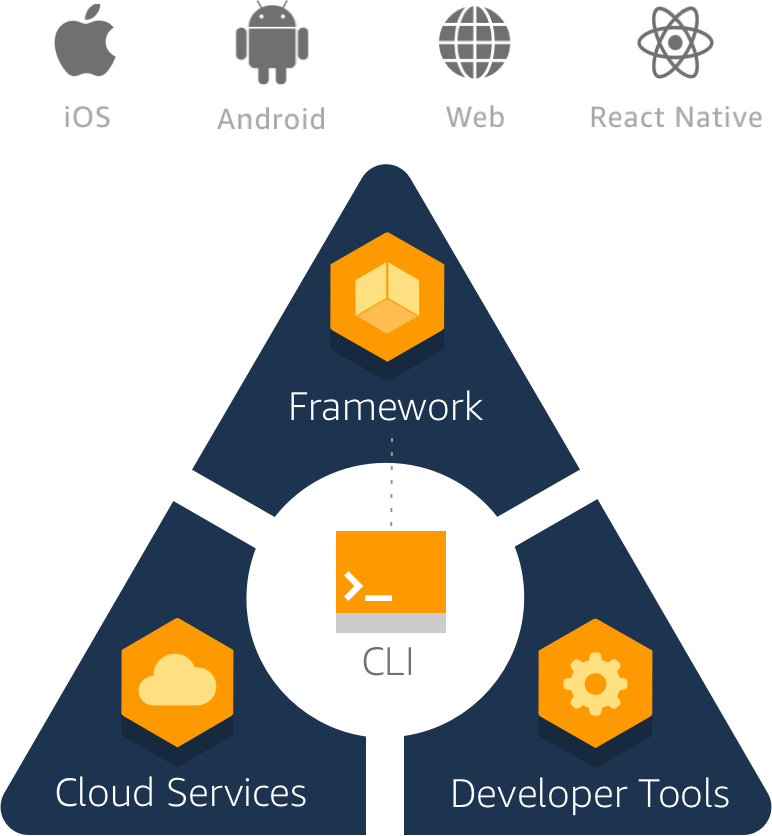 The open source Amplify Framework provides an opinionated set of libraries, UI components, and a command line interface to build an app backend and integrate it with your iOS, Android, Web, and React Native apps. The Amplify Framework leverages a core set of AWS Cloud Services to offer capabilities including offline data, authentication, analytics, push notifications, bots, and AR/VR at high scale. The AWS Amplify developer tools include the AWS Amplify Console for building, deploying, and hosting web apps and AWS Device Farm for testing mobile apps on real iOS and Android devices.

One of the issues with developing web applications is deployment. The frontend and backend deployments must happen in a coordinated fashion. The AWS Amplify Console is a continuous-deployment lifecycle engine that’s specifically designed for modern web applications—including common single-page app frameworks like React, Angular, and VueJS, and static site generators like Gatsby, Hugo, and Jekyll.

With the AWS Amplify Console, you create a project and link it to your source code repository (located in GitHub, GitLab, BitBucket, or Amazon CodeCommit). The AWS Amplify Console enables you to provision your backend resources, build your application, and deploy it to a CDN-powered, secure website. This helps you to continuously and automatically deploy both the backend and frontend resources that you configured through the Amplify CLI just by checking in a change to your source code repository.

In the three years since we introduced AWS Mobile Hub, we’ve spoken to many developers.  We listened to the feedback about what was difficult or confusing about developing mobile and web applications within the AWS ecosystem, and distilled that down to two problems:

What will happen in the near future?

AWS Amplify will become the home for modern app development within the AWS ecosystem, with more services becoming optimized for AWS Amplify. You might have already have seen some of those changes. Recently, all mobile and web SDK documentation was moved to the AWS Amplify site as we moved the iOS and Android native SDKs towards the same category-based programming model that the Amplify JavaScript library.

We hope you’ll take this opportunity to amplify your mobile and web application development, and we’re available to support you. For more information about AWS Amplify, check out our new home page.