Recently we made contributions to OpenTelemetry that included the metrics collection and processing functionality for the C++ library. These metrics are collected from instrumented applications and infrastructure. They allow users to monitor the health of their services, improve performance, and detect anomalies. In this post we explain how the new metrics pipeline works, how it might be used in code, and the lessons we learned along the way.

We found that the C++ API and SDK was a possible area of contribution, in particular, implementing the Metrics API and SDK functionality as it was at the time nonexistent. We saw this as a substantial contribution opportunity that aligned with our team’s development skill set and interests.

Given that we were implementing this portion of the library from scratch, we reviewed the universal OpenTelemetry specification to understand the metrics pipeline requirements. This added another layer of complexity to our task because the specification itself remains under development. This meant we were constantly aiming at a moving target. We translated these requirements into a set of design documents that we iteratively reviewed with the OpenTelemetry community.

Open source projects are unique in that, rather than a single central figure making decisions, there is generally a community process for decision-making. For example, all of our reviews, from initial project designs to the final code, received critiques from OpenTelemetry contributors across many organizations. Though design documents are perpetually evolving, we began implementing once we felt our proposal was sufficiently detailed and comprehensive. 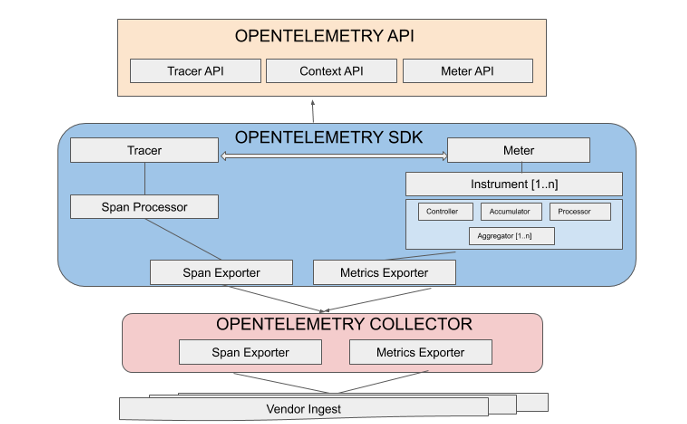 The OpenTelemetry specification demands an API and a SDK for its metrics architecture. The API defines how to capture metric data, while the SDK processes, queries, and exports it. A user can inject our API elements into their application with no compilation issues; however, the API on its own will not be able to generate any useful metric data. After a user installs the SDK, the library aggregates, filters, and distributes API-captured data to any number of visualization backend services. We like to think of the API as feeding data into the SDK pipeline. 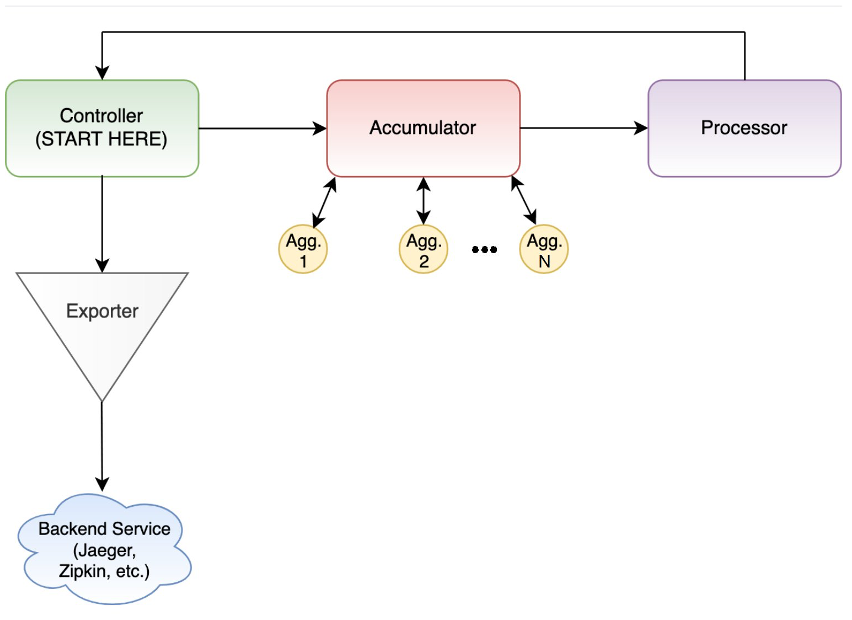 We also implemented an OStreamExporter for the metrics and tracing pipelines. These Exporters are comparable to stdout in other OpenTelemetry projects. Exporters are initialized with an ostream to which the user wants to send all metric or tracing data. We originally only planned to implement stdout functionality, but we decided to handle all streams with stdout being the default. This was a simple change for a lot of additional functionality.

The OStreamMetricsExporter implements only one function, Export(), which takes in a vector of records that contain the name, description, labels, and aggregator from an instrument. The function then sends the name, description, and labels to ostream. Aggregators are templatized and held within a variant, making the process of sending them to the ostream more complicated. First, we must find out what type the aggregator is holding, which we can find by using holds_alternative. We then send this to a template function to unpack the aggregator from the variant. Once we have the aggregator, we can check what type of aggregator is, then send the relevant information to the ostream based on its kind.

The SpanProcessor automatically send spans to the Exporter when their memory is deleted. The SpanExporter receives a span of spans and sends their basic information to the initial ostream. This includes the name, trace id, span id, parent span id, start time, duration, description, and status. The span also has attributes, which are held in a map of string to variant and, because it holds a variant, we must unpack the value. After we unpack the variant, we can also send the data it holds to the ostream and conclude exporting.

With this information, users can monitor the health of their system, detect anomalies, and improve performance. These metrics are an improvement over logs because they are intelligently aggregated and automatically processed. Users can spend more time analyzing the insights instead of tediously extracting them from thousands of lines of logs.

We can examine how a user might actually instrument their code and capture labeled data in the following diagram:

Throughout this project, we learned a great deal about developing scalable code and working with a large community of open source contributors. As interns, we are used to writing code the minute we see a specification, but this approach fails miserably as the project grows in complexity. We found that it is crucial to plan nearly every aspect of a library’s architecture before writing a single line of code.

Additionally, we embraced the tenets of open source design, which center on transparency and debate: Document and discuss everything, no exceptions. Overall, working on OpenTelemetry was a terrific experience, and we are interested in continuing to work in the open source community.

Brandon Kimberly is a senior at Ohio University, currently interning as a software developer at AWS. He is interested in machine learning, observability, and all things Rust.

Ankit Bhargava is a senior at the University of Michigan, majoring in computer science and business, and interning as a software engineer at AWS. When he’s not working on OpenTelemetry, Ankit likes to read about cybersecurity and machine learning.

Hudson Humphries is a senior at Texas A&M University, majoring in computer science with a minor in Statistics, and interning as a software engineer at AWS. He’s interested in Data Analytics.