AWS helps Clearpath Robotics make it easier for their customers like Boston Dynamics to prototype robotics applications in simulation. With the AWS CloudFormation Launch Stack, Clearpath’s customers can launch Gazebo simulations in AWS RoboMaker with a click of a button.

Clearpath Robotics is a leading manufacturer of mobile robots for research and development. Robot types include a variety of indoor, outdoor, land, and sea robots. Over the past 10 years, Clearpath has been enabling robotics research and development with their fully customizable and Robot Operating System (ROS)-supported wheeled robots. These robots are used for mobile research in academia and industries such as energy, agriculture, and construction. Clearpath, in cooperation with Boston Dynamics, led to the creation of a ROS package for the Boston Dynamics Spot Robot, that academic and corporate developers can use within their robotics research and application development.

Prototyping algorithms for autonomous robot applications involves iterative development with testing on physical hardware. When hardware is not available or scarce, developers must wait until the end of the development cycle for physical testing. This slows down development and causes early-stage bugs to go unchecked until much later in the cycle, resulting in expensive refactoring. The resulting long development time and high development cost ultimately limit the number of robots being deployed.

Simulation is a useful for tool for robotics developers to test their applications without the limitations of physical hardware. Using simulation, developers can test their robot application logic with a virtual model of the robot in a simulated environment, which replicates real-world conditions. This helps teams reduce reliance on testing with robotics hardware, find software defects earlier, and ultimately, speeds up development time.  Clearpath provides simulation worlds and a URDF models of their robots for developers run simulations. They recently released new outdoor Gazebo-based simulation worlds to help developers test their robots in diverse scenarios and environments.

However, many of Clearpath’s customers don’t have the development resources or skills to set up and use simulation. First, it’s difficult and expensive to get and manage the compute infrastructure required for running simulations. Setting up and running concurrent simulations, where benefits such as parameter tuning and regression tests can be achieved, is complex process requiring experienced DevOps skills. Finally, building 3D assets required for simulation is expensive and requires specialized design skills. Clearpath wanted to remove these barriers using simulations, to streamline the process for their customers to build and deploy their robots into production.

Clearpath provides solutions and tools to streamline processes using AWS RoboMaker Simulation for their customers to set up and use simulation. This service makes it possible for developers to build and run simulations for ROS-based robotics software, without managing any infrastructure. Engineers at Clearpath, with AWS, created a one-click AWS CloudFormation Launch Stack, so Clearpath’s customers can provision infrastructure, launch simulations, and run tests in simulation in AWS RoboMaker with a click of a button. With AWS RoboMaker Simulation and the AWS CloudFormation Launch Stack, Clearpath’s customers can easily simulate the different Clearpath robots in virtual Gazebo environments. The ability to quickly provision infrastructure and launch simulations in the cloud enables robotics developers to start using the simulated robot model and sensors in their applications to test their algorithms and code logic much before the physical robot is shipped. 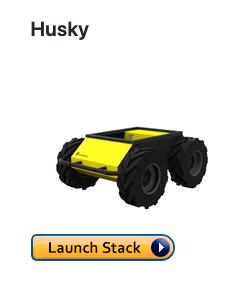 The AWS CloudFormation Launch Stack enables developers to launch simulations with a click of a button, shown here.

Clearpath also offers a ROS package for the SPOT robot to enable researchers to adopt and use the Spot robot. Spot is a nimble, four-legged robot that is well suited for unstructured environments and is fully capable of climbing stairs and traversing rough terrain. With Clearpath’s ROS Package for Spot, robotics developers and researchers can use standard ROS capabilities, open-source libraries, tools, and the ROS community to accelerate their robotics development. Additionally, AWS has made it possible to set up an AWS CloudFormation Launch Stack for the Spot robot. You can launch the spot robot in any of the Clearpath worlds such as the construction world, outdoor world, or the agriculture world via the one-click launch stack.

Spot in a simulated construction site in AWS RoboMaker.

Spot in a simulated agriculture world.

In this blog, we reviewed how Clearpath and AWS are enabling robotics researchers to develop, prototype, and test robotics applications with open-source simulation assets, AWS RoboMaker, and the AWS CloudFormation Launch Stack. These services and solutions are especially helpful for those developers who are new to the cloud. We also walked you through how to create your own AWS CloudFormation Launch Stack URL. To learn more, check out AWS RoboMaker Simulation or contact us with further questions.