If you use AWS CloudTrail to log API calls in your account, you can share your log files with other AWS accounts, whether you own those accounts or not. In this post, Greg Pettibone, a technical writer on the CloudTrail team, walks through some cross-account scenarios to show you how.

AWS CloudTrail captures information about all the API calls made to supported services in your AWS account. For example, if user Dave starts or stops an Amazon EC2 instance in your account, or if user Alice creates an IAM user or changes the user’s password, these actions are recorded by CloudTrail. A CloudTrail log entry tells you what request was made (the action and the requested resource), the source IP address for the request, who made the request, when it was made, and so on.

In the simplest case, CloudTrail writes information to an Amazon S3 bucket that belongs to the AWS account where CloudTrail is turned on. But there are a couple of scenarios where it’s useful to share the S3 bucket that contains CloudTrail log files with other accounts:

In this post, I’ll walk you through these scenarios.

[Update (Sept 24, 2014): Made corrections to two steps in the following procedures.]

Prerequisites: One AWS account, one Amazon S3 bucket, and CloudTrail

Before you can share log files, CloudTrail must be able to deliver those files to an Amazon S3 bucket that you own. You begin by turning on CloudTrail in your AWS account and specifying a bucket to use. We recommend that you choose the default option in CloudTrail, which is to create a new Amazon S3 bucket, so that the correct bucket access policies are automatically created for you.

For example, imagine that Example Corp has an AWS account named Production with the ID number 123456789012, and that Alice is the administrator for that account. Alice turns on CloudTrail in the Production account and specifies that CloudTrail should write log files to a new bucket named example-ct-logs. She performs the following actions:

Here’s the scenario that Alice has set up:

Notice that the bucket name, example-ct-logs, is the fixed literal string that Alice specified when she turned on CloudTrail. The two other literal strings (AWSLogs and CloudTrail) are assigned by CloudTrail and appear in every Amazon S3 path that CloudTrail creates. For example, assume that Alice turned on the Production account (123456789012) in the Northern Virginia region (us-east-1) on July 31, 2014. Assuming that there’s activity in the account that can be recorded, within 15 minutes Alice will see log files begin to appear in the bucket. They’ll be created as objects that in the following path:

The following day, log activity, if any, will be delivered to files in a path that looks like this:

The paths will change in this manner every day that there is log activity unless Alice turns CloudTrail off. 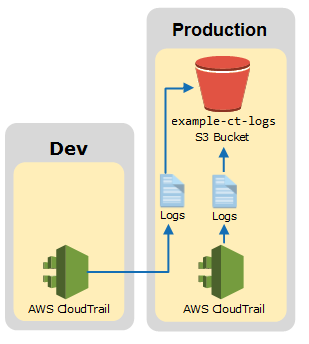 However, before Alice can enable log file aggregation across accounts, she must edit the bucket policy on the example-ct-logs bucket. When she originally turned on CloudTrail in the Production account, CloudTrail added a policy to the Amazon S3 bucket that enabled the CloudTrail to write to the bucket owned by the Production account (123456789012)[corrected 24-Sep-14]. The only change that Alice needs to make in the bucket policy is to allow AWS accounts to write into a new folder, this one for the Dev account (therefore, 999988887777). Alice does the following:

This is the only change she needs to make in the policy.

Now Alice can turn on CloudTrail in the Dev account and point the log files to the shared bucket. She does the following:

From now on, whenever an API call is made in the Dev account, the information is logged in the example-ct-logs bucket. Since CloudTrail uses a different folder in the bucket for each account and each date, once log files start appearing in example-ct-logs, Alice sees paths similar to these in her Production S3 console:

Once log files start accumulating in the example-ct-logs bucket, Example Corp decides that they want to analyze the log information. They hire AnyCompany, a vendor that provides a wide variety of reports and tools, to help Example Corp see what sorts of information the log files are capturing.

Since there’s a lot of AWS activity at Example Corp across the accounts that have CloudTrail turned on, the log files accumulate pretty quickly. Therefore, it makes the most sense to give AnyCompany direct, read-only access to the example-ct-logs bucket.

The best (and recommended) way for Example Corp to share AWS CloudTrail log files with a vendor is to use cross-account access via an IAM role. This lets AnyCompany get temporary security credentials that they can use to access the bucket that contains the log files.

The scenario is illustrated by the following diagram: 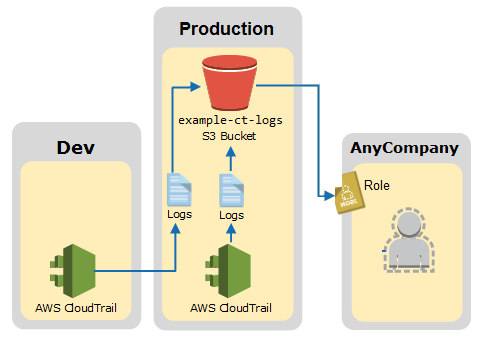 This approach assumes that AnyCompany has its own AWS account. Since AnyCompany accesses AWS resources on behalf of the resource owner, AnyCompany should also have an external ID for ExampleCorp. This is a value that an AWS vendor gives to its customers that uniquely identifies the customer in the vendor’s system. I’ll explain shortly how the external ID is used.

Alice must now configure access for AnyCompany to the S3 bucket example-ct-logs. She contacts the vendor to get two pieces of information:

To grant AnyCompany access to the log files that CloudTrail delivers to the example-ct-logs bucket, Alice must create an IAM role in the Production account. This role requires two policies. The first is the trust policy, where Alice specifies that Example Corp trusts AnyCompany to assume the role and to get temporary security credentials to access the AWS Production account. The second is an access policy that specifies what actions the role allows AnyCompany to perform. In this case, of course, the access policy will permit AnyCompany read-only access to the example-ct-logs bucket. Optionally, Alice can scope the permissions down so that AnyCompany has access to only specific folders within the bucket.

Once Alice has the account ID and the external ID from AnyCompany, she does the following:

That’s it for creating the role. Because Alice used the IAM console to create the role, the trust policy was created for her and looks like this:

In this trust policy, the Principal element is set to the vendor’s account ID. This means that Example Corp is trusting AnyCompany to assume the role that Alice just created. However, you can see that there’s a condition on the policy, and AnyCompany can only assume this rule if they pass the external ID they’ve assigned to Example Corp as part of the request to assume this role.

Once Alice has finished creating the role, she contacts AnyCompany and gives them the following information:

If you’re not already using CloudTrail, we recommend that you turn it on in all of your AWS accounts—in fact, using CloudTrail is one of our recommended best practices. And of course, once you start keeping logs, you can review them periodically to analyze usage in your account or accounts. To help you with this task, there are a number of AWS Partners that specialize in logging and analysis to provide solutions that leverage CloudTrail output. For more information, visit the CloudTrail detail page at http://aws.amazon.com/cloudtrail.

If you’d like more information about CloudTrail or about the scenarios we examined, see the following documentation:

If you have questions, please visit the CloudTrail forum.