Code signing is the process of digitally signing executables and scripts to confirm the software author and to demonstrate that the code has not been altered or corrupted since it was signed. Packaged software uses branding and trusted sales outlets to assure users of its integrity, but these guarantees are not available when code is transmitted on the internet. Additionally, the internet itself cannot provide any guarantee about the identity of the software creator.

To solve this issue, many companies turn to Microsoft SignTool, a command-line tool that digitally signs files, verifies signatures in files, or time stamps files. The certificate allows end users to trust that software is signed by the author, so long as the private key that is used to sign is only available to that author. A common problem, however, is that the private key and the certificate used in the signing process are located on the same machine. If an attacker compromises the server and steals both the private key and certificate, they can sign malicious code while posing as the trusted author. To protect against this, some companies move their private keys to offline devices. But this means that the keys need to be brought online for each new signing request, or in batches, prolonging the amount of time it takes to sign. The offline devices also need to be stored and backed up in separate, physically secure locations to prevent tampering. A more efficient solution is to use AWS CloudHSM to provide secure storage and backup for these private keys. In this post, I’ll show you how.

This walkthrough assumes that you have a working knowledge of Amazon EC2, AWS CloudHSM, the administration of Windows Server, as well as the basics of certificates and public key infrastructure.

Before you follow this walkthrough, you should first complete the steps in the walkthrough Configure Windows Server as a Certificate Authority (CA) with AWS CloudHSM, and have an example unsigned Windows PowerShell script .ps1 file. After you’ve completed the set-up of your Windows Server CA, you’ll have all the major components ready to start signing your code: the AWS CloudHSM cluster in an Active state, Crypto Users (CU) created on your CloudHSM to manage keys, and the necessary client packages installed on the Windows instance within the same VPC as your AWS CloudHSM.

Important: You will incur charges for the services used in this example. You can find the cost of each service on the corresponding service pricing page. For more information, see
AWS CloudHSM Pricing and Amazon EC2 Pricing.

The focus of this blog post is how to use AWS CloudHSM to store the keys that are used by certificates that will sign binaries used by Microsoft SignTool.exe. It is not intended to represent any best practices for implementing code signing or running a Certificate Authority. For more information, see the NIST Cybersecurity Whitepaper
Security Considerations for Code Signing. 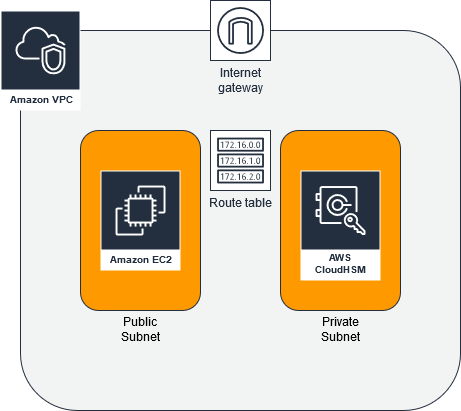 This diagram shows a virtual private cloud (VPC) containing an Amazon EC2 instance running Windows Server 2012 R2 that resides on a public subnet. This instance will run both the CloudHSM client software and Windows Server CA. The instance can be accessed via the Internet Gateway. It will also have security groups that enable RDP access for your IP. The private subnet hosts the Elastic Network Interface (ENI) for CloudHSM cluster that has a single HSM.

Step 1: Install SignTool.exe as part of the Microsoft Windows SDK

Download and install one of the following versions of the Microsoft Windows Software Development Kit (SDK):

Now that you’ve installed the software required to sign your files, you can start creating a key pair in AWS CloudHSM, along with the corresponding certificate. You can do this with the Certreq application that’s included with Windows Server. The end result from Certreq is a Certificate Signing Request (CSR) that you can submit to a CA. In this example, you’ll submit it to the Microsoft Windows CA you created in the prerequisite section. Certreq supports the KSP (Key Storage Provider) standards, which allows you to specify the name of the KSP created by Cavium specifically for AWS CloudHSM. This is included and installed as part of the AWS CloudHSM client installation.

For code signing jobs where the integrity of your signature is important to your business, AWS CloudHSM supports the Microsoft CNG/KSP standard that enables you to store the private key of a Digital Signature certificate within an HSM. Since the private key no longer has to reside on the server, it’s no longer at risk if the server itself were to be compromised.