Kubernetes Ingress is an API object that provides a collection of routing rules that govern how external/internal users access Kubernetes services running in a cluster. An ingress controller is responsible for reading the ingress resource information and processing it appropriately. As there are different ingress controllers that can do this job, it’s important to choose the right one for the type of traffic and load coming into your Kubernetes cluster. In this post, we will discuss how to use an NGINX ingress controller on Amazon EKS, and how to front-face it with a Network Load Balancer (NLB).

What is a Network Load Balancer?

An AWS Network Load Balancer functions at the fourth layer of the Open Systems Interconnection (OSI) model. It can handle millions of requests per second. After the load balancer receives a connection request, it selects a target from the target group for the default rule. It attempts to open a TCP connection to the selected target on the port specified in the listener configuration.

Exposing your application on Kubernetes

In Kubernetes, these are several different ways to expose your application; using Ingress to expose your service is one way of doing it. Ingress is not a service type, but it acts as the entry point for your cluster. It lets you consolidate your routing rules into a single resource, as it can expose multiple services under the same IP address.

This post will explain how to use an ingress resource and front it with a NLB (Network Load Balancer), with an example. 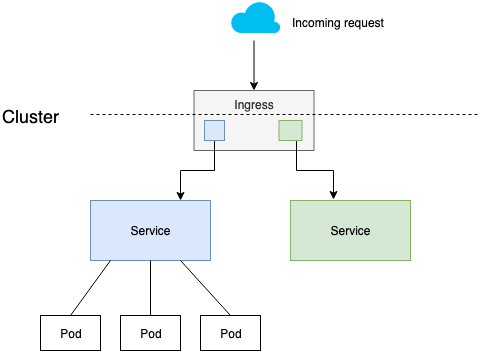 Kubernetes supports a high-level abstraction called Ingress, which allows simple host- or URL-based HTTP routing. An Ingress is a core concept (in beta) of Kubernetes. It is always implemented by a third party proxy; these implementations are known as ingress controllers. An ingress controller is responsible for reading the ingress resource information and processing that data accordingly. Different ingress controllers have extended the specification in different ways to support additional use cases.

Typically, your Kubernetes services will impose additional requirements on your ingress. Examples of this include:

An ingress controller is a DaemonSet or Deployment, deployed as a Kubernetes Pod, that watches the endpoint of the API server for updates to the Ingress resource. Its job is to satisfy requests for Ingresses. NGINX ingress is one such implementation. This blog post implements the ingress controller as a Deployment with the default values. To suit your use case and for more availability, you can use it as a DaemonSet or increase the replica count.

By default, the NGINX Ingress controller will listen to all the ingress events from all the namespaces and add corresponding directives and rules into the NGINX configuration file. This makes it possible to use a centralized routing file which includes all the ingress rules, hosts, and paths.

Furthermore, features like path-based routing can be added to the NLB when used with the NGINX ingress controller.

Why do I need a load balancer in front of an ingress?

Ingress is tightly integrated into Kubernetes, meaning that your existing workflows around kubectl will likely extend nicely to managing ingress. An Ingress controller does not typically eliminate the need for an external load balancer , it simply adds an additional layer of routing and control behind the load balancer.

Pods and nodes are not guaranteed to live for the whole lifetime that the user intends: pods are ephemeral and vulnerable to kill signals from Kubernetes during occasions such as:

The load balancer (Kubernetes service) is a construct that stands as a single, fixed-service endpoint for a given set of pods or worker nodes. To take advantage of the previously-discussed benefits of a Network Load Balancer (NLB), we create a Kubernetes service of  type:loadbalancer with the NLB annotations, and this load balancer sits in front of the ingress controller – which is itself a pod or a set of pods. In AWS, for a set of EC2 compute instances managed by an Autoscaling Group, there should be a load balancer that acts as both a fixed referable address and a load balancing mechanism. 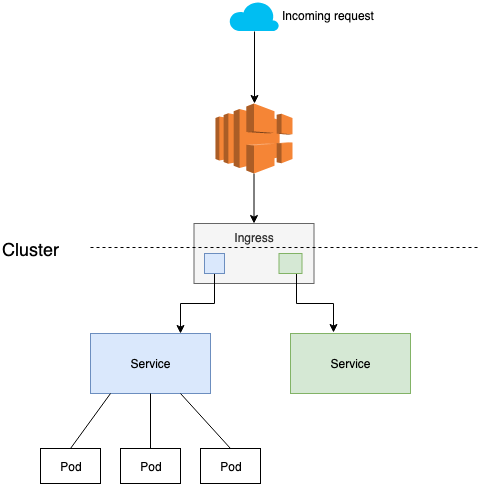 The diagram above shows a Network Load Balancer in front of the Ingress resource. This load balancer will route traffic to a Kubernetes service (or Ingress) on your cluster that will perform service-specific routing. NLB with the Ingress definition provides the benefits of both a NLB and an Ingress resource.

What advantages does the NLB have over the Application Load Balancer (ALB)?

A Network Load Balancer is capable of handling millions of requests per second while maintaining ultra-low latencies, making it ideal for load balancing TCP traffic. NLB is optimized to handle sudden and volatile traffic patterns while using a single static IP address per Availability Zone. The benefits of using a NLB are:

Start by creating the mandatory resources for NGINX Ingress in your cluster:

The above manifest file also launches the Network Load Balancer(NLB).

Now create two services (apple.yaml and banana.yaml) to demonstrate how the Ingress routes our request.  We’ll run two web applications that each output a slightly different response. Each of the files below has a service definition and a pod definition.

If you’ve purchased and configured a custom domain name for your server, you can use that certificate, otherwise you can still use SSL with a self-signed certificate for development and testing.

In this example, where we are terminating SSL on the backend, we will create a self-signed certificate.

Anytime we reference a TLS secret, we mean a PEM-encoded X.509, RSA (2048) secret. Now generate a self-signed certificate and private key with:

Then create the secret in the cluster:

Now declare an Ingress to route requests to /apple to the first service, and requests to /banana to second service. Check out the Ingress’ rules field that declares how requests are passed along:

Create the Ingress in the cluster:

Set up Route 53 to have your domain pointed to the NLB (optional):

Can I reuse a NLB with services running in different namespaces? In the same namespace?

Install the NGINX ingress controller as explained above. In each of your namespaces, define an Ingress Resource.

Suppose we have three namespaces – Test, Demo, and Staging. After creating the Ingress resource in each namespace, the NGINX ingress controller will process those resources as shown below: 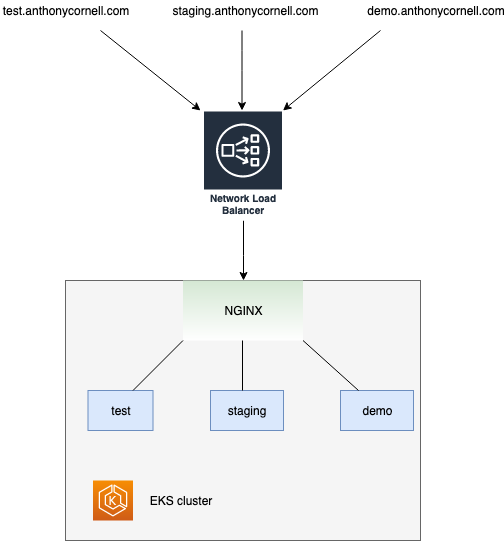 We hope this post was useful! Please let us know in the comments.