Node.js reads and parses all dependencies and sources that are required or imported from the entry point. Consequently, it’s important to keep the dependencies to a minimum and optimize the ones in use.

This post shows how to bundle and minify Lambda function code to optimize performance and stay up to date with the latest version of your dependencies.

When you require or import a resource in your code, Node.js tries to resolve that resource by either the file- or directory name, or in the node_modules directory. Once it finds the resource, it is loaded from disk, parsed and run.

If that file or dependency in turn contains other imports or require statements, the process repeats, which causes disk reads. The more dependencies and files that are imported in a function, the longer it takes to initialize.

This only impacts imported and used code. Including files in a project that are not imported or used has minimal effect on startup performance.

You should also evaluate what’s being imported. Even though modern JavaScript bundlers such as esbuild, Rollup, or WebPack uses tree shaking and dead code elimination, importing dependencies via wildcard, global-, or top-level imports can result in larger bundles.

Use path imports if your library supports it:

The documentation shows that all Node.js runtimes share the same AWS SDK for JavaScript version. To control the version of the SDK that you depend on, you must provide it yourself. Consider using AWS SDK V3, which uses a modular architecture with a separate package for each service.

This has many benefits, including faster installations and smaller deployment sizes. It also includes many frequently requested features, such as a first-class TypeScript support and a new middleware stack. Since there is a separate package for each service, top-level import is not possible, which further increases startup performance.

By providing your own AWS SDK, it can also be bundled and minified during the build process, which can result in cold start reduction.

You can bundle and minify Lambda functions by using esbuild. This is one of the fastest JavaScript bundlers available, often 10-100x faster than alternatives like WebPack or Parcel.

1. Add esbuild to your dev dependencies using npm or yarn:

2. Create a “build” script in the script section of the package.json file:

This script first removes the dist directory and then runs esbuild with the following command-line arguments:

To package your Lambda functions, navigate to the dist directory and zip the contents of each respective directory. Note that one zip file per function should be created, only containing index.js and index.js.map. You may also clone the sample project.

If you are already using the AWS CDK, consider using the NodejsFunction construct. This construct abstracts away the bundle procedure and internally uses esbuild to bundle the code:

Once all the sources have been bundled you may have noticed that they have small file sizes compared to zipping node_modules and the source files. Your package may be more than 100x smaller. They will also initialize faster.

Comparing and measuring the results

After deployment, you can also see a significant cold start performance improvement. You can load test the Lambda functions using Artillery. Replace the url from the deployment output: 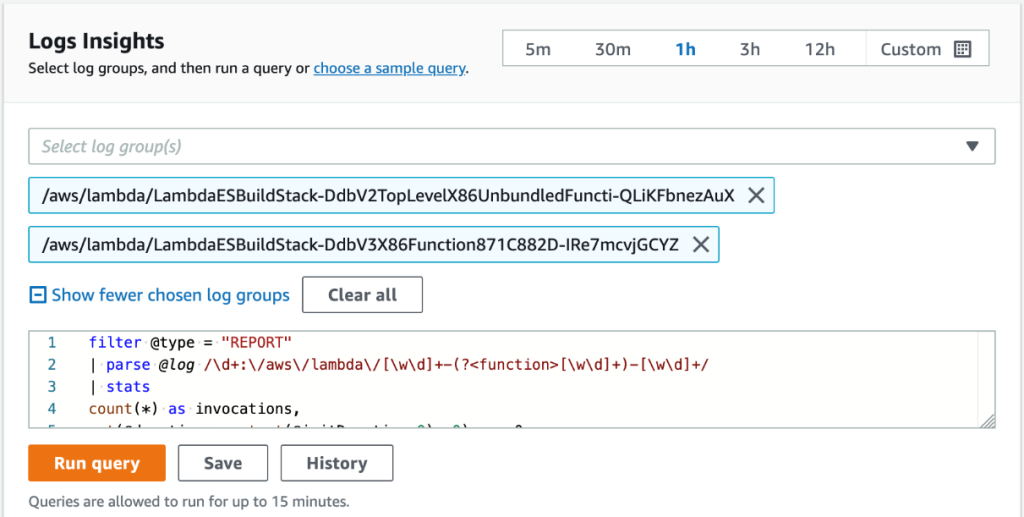 The cold start invocations for DdbV3X86 run in 551 ms versus DdbVZTopLevelX86Unbundled, which run in 945 ms (p90). The minified and bundled v3 version has about 1.7x faster cold starts, while also providing faster performance during warm invocations.

In this post, you learn how to improve Node.js cold start performance by up to 70% by bundling and minifying your code. You also learned how to provide a different version of AWS SDK for JavaScript and that dependencies and how they are imported affects the performance of Node.js Lambda functions. To achieve the best performance, use AWS SDK V3, bundle and minify your code, and avoid top-level imports.