Apache Hadoop is an open-source software framework to store and process large scale data-sets.  In this post, we discuss the deployment of a Hadoop cluster via Cloudera’s Enterprise Data Hub (EDH) on AWS. The easy deployment below leverages various AWS technologies such as AWS Cloudformation, Amazon Elastic Compute Cloud (Amazon EC2), and Amazon Virtual Private Cloud (Amazon VPC) along with Cloudera Director software. Cloudera Director enables the delivery of enterprise-class, elastic, self-service experience for the Enterprise Data Hub on cloud infrastructure.  This deployment allows customers to build a Hadoop cluster rapidly on-demand, while providing enough options to customize their cluster at fine granularity.

The flexible architecture allows you to choose the most appropriate network, compute and storage infrastructure for your environment, while the automation via Cloudformation and Cloudera Director Software takes care of building the infrastructure on AWS.  The automation roughly works by launching a Launcher Instance through which the entire cluster is constructed. Options to customize the cluster is done on the launcher instance. Because most of the steps are automated, customers can rapidly construct the cluster on AWS by changing configuration files and parameters during deployment. Let’s begin!

To deploy EDH, you’ll need to sign up for an AWS account, create a key pair, and request an Amazon EC2 limit increase if applicable. You’ll need to be familiar with AWS technologies such as Amazon VPC, NAT instance, Security Groups, and IAM roles. These are automatically built via CloudFormation. You’ll also need to be familiar with Hadoop services such as HDFS, YARN, ZOOKEEPER, HIVE, HUE, and OOZIE.

You should also understand different instance types and your workload type as outlned in the following table.

An EDH cluster could be launched either within a Public Subnet or within a Private Subnet. A cluster topology derived from a Public Subnet includes an Amazon EC2 instance (referred to as Cluster Launcher instance) which is launched within the public subnet. An Elastic IP Address (EIP) is assigned to the instance, and a security group allowing SSH access to the instance is created. The Cluster Launcher instance then builds the EDH cluster by launching all of the Hadoop related Amazon EC2 instances within the public subnet. In this topology, all the instances launched have direct access to the Internet and to any other AWS services that may be subsequently used such as Amazon Simple Storage Services (Amazon S3) and  Amazon Relational Database Service (Amazon RDS). 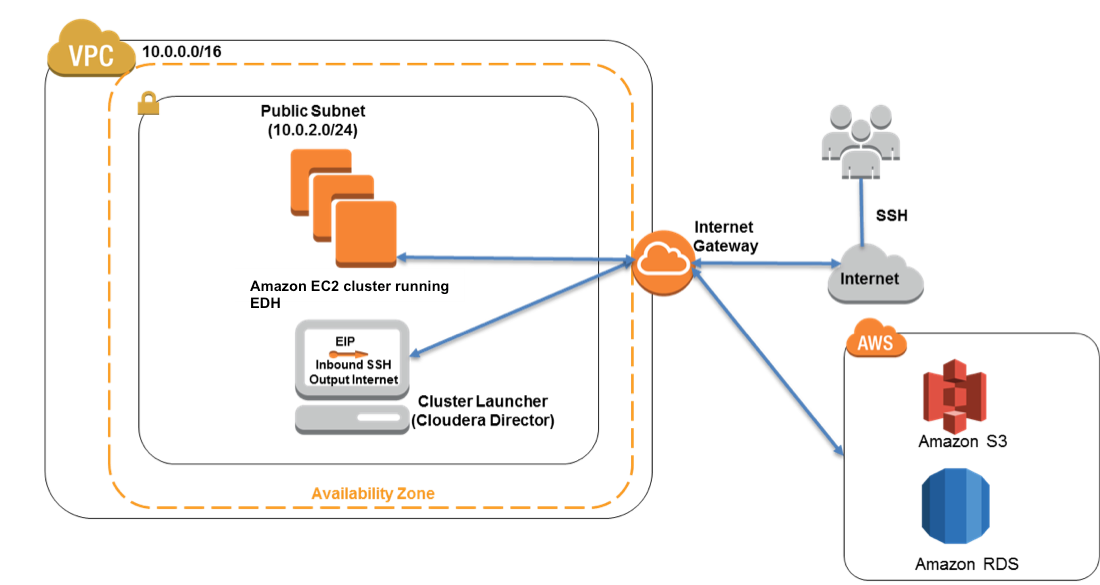 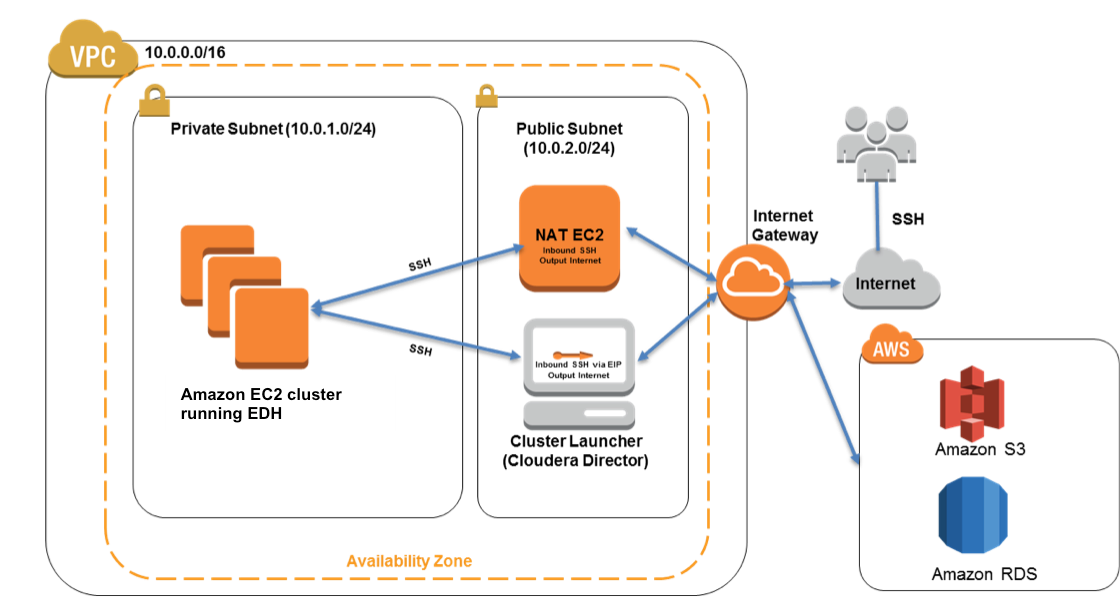 A cluster topology derived from a Private Subnet launches the Cluster Launcher instance within the public subnet. An Elastic IP Address (EIP) is assigned to the instance, and a security group is created allowing SSH access to the instance. All other Hadoop-related Amazon EC2 instances are created within the private subnet.  In this topology, the Amazon EC2 instances within the EDH Cluster do not have direct access to the Internet or to other AWS services. Instead, their access is routed via NAT instances residing in the public subnet. This topology is more suitable if the EDH cluster doesn’t require full external bandwidth to the Internet or to other AWS services such as Amazon RDS and Amazon S3. To learn more about high availability for NAT Instances, see High Availability for Amazon VPC NAT Instances.

In this step, you configure the VPC and build Public and Private Subnet along with a NAT instance. A cluster lancher instance is also created. You will connect to the launcher instance in next step and customize the cluster and then deploy the EDH cluster. The only mandatory input expected by the template is KeyName, while other may still be customized. Launch the VPC template into your AWS account using AWS CloudFormation link: LaunchStack Wait until the AWS CloudFormation status is CREATE_COMPLETE.

Next, you SSH to the Launcher EC2 instance, configure EDH services and deploy the EDH Cluster.  During bootup, the Launcher instance downloads Cloudera Director software and automatically builds a configuration file based on various resources created such as VPC, private subnet, and public subnet. There are two configuration files: aws.simple.conf for simple clusters and aws.reference.conf for complex clusters.

The following steps configure and deploy the cluster: 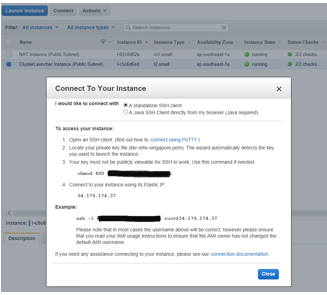 Deploy using the CLI as shown below:

If you want to spin up and manage multiple clusters, instead of above, you may deploy using Cloudera Director Server (recommended) as below.

That’s it! The cluster will be ready in less than 30 minutes.

From Cloudera Director’s web interface you can clone the cluster you just created, dynamically scale the cluster, or spin up an entirely new cluster. You can also view all your clusters using a centralized dashboard.

Shutting Down the Cluster

The cluster can be shut down via CLI as shown below:

For additional information, please refer to the following links.

By following these simple deployment steps, you can setup a cluster running Cloudera’s Enterprise Data Hub. This eliminates the process of procuring systems and installing Hadoop software and rapidly reduces the time to build a test or production cluster.

On the mysql issue, we’ve noted the bug. Cloudera plans to fix it in next version (no official date – but expect in a week). When the fix is available, we will update our templates to download the new version. In the meantime, there is a workaround. Install Cloudera Manager 5.1.3 by overriding the repository in conf file:

Give it a try and let us know if you still see any issues.