Many organisations are in the process of migrating their applications to containers. Containers provide application-level dependency management, speedy launches, and support immutability. This can help reduce costs, increase velocity, and improve on efficiency. For securely managing the container lifecycle, container image hardening, and end-to-end security checks are critical factors. Containers need to be secured by default before the containers are deployed into a container orchestrator, such as Amazon Elastic Kubernetes Service (Amazon EKS). The journey of hardening containers begins as follows:

Let’s first cover what is a static scan and a dynamic scan to better understand the pipeline flow:

To learn more about this topic, check out this post on Container DevSecOps on Amazon ECS Fargate with AWS CodePipeline. In this post, we show you how you can build, install, and use runtime security with CNCF Falco on Amazon EKS. The demo utilizes a static scan methodology and performs a deep container scan for any vulnerabilities or issues and finally deploys them to Amazon EKS.

We will be using the following AWS services and open source tools for this post:

Set up your Amazon EKS cluster

Before we set up an Amazon EKS cluster, please set up the tools mentioned below on your system. Detailed information on how to setup with respect to operating system types has been provided in the links:

You can go to eksctl.io page to get many examples of ClusterConfig samples. Below is one of the configuration files you can use. In this demo, we show how to build the cluster with pre-existing resources. Visit the eksctl docs to understand the ClusterConfig schema elements.

Run the below command to create the Amazon EKS cluster.

You can find the cluster created by Amazon CloudFormation as shown below:

You can go to the Amazon EKS page on the AWS Management Console and check the status of the cluster creation as below:

Set up a sample deployment on Amazon EKS Cluster

Create a new configuration called deployment.yaml for your sample application. We will use a sample Nginx website pods on the public subnets that we have provided in the cluster configuration file cluster-config.yaml.

Check the below sample deployment.yaml file.

Now deploy Nginx as shown below:


You can verify the deployment status with kubectl command.

You should see the following output.

Set up a Falco runtime security

We will install the well known runtime security tool CNCF Falco for deep container security events analysis and alerts. Falco works in conjunction other AWS services such as Firelens and Amazon CloudWatch. Firelens is log aggregator product which has the ability to collect and send the container logs to many services like inside Amazon ecosystem like Amazon CloudWatch for further analysis and alerting mechanisms. Firelens uses Fluent Bit or Fluentd behind the scenes and supports all features and configurations of both of the products. We can even send the AWS Firelens logs output to any external logging and analytics services as well.

1. Falco continuously scans the containers running in the pods and sends the security, debug, or audit events as JSON format as STDOUT.

2. Firelens then collects the JSON log file and processes the logs files as per Fluent Bit configuration files.

3. Post log transformation by Fluent Bit containers, the logs are finally sent to AWS CloudWatch as the final destination.

This blog explains in depth on how to install Falco and how to it works with other AWS services.

Now go to the directory, eks/fluent-bit, and you will find two directories called aws and kubernetes

aws – This is the directory that has the IAM policy called iam_role_policy.json, which we will attach to the worker node VM’s role, which is automatically attached to the worker nodes when we create or deploy an EKS cluster. This policy will give Falco running on the worker nodes to send/stream logs to Amazon CloudWatch.

This Falco blog explains the same on how to install standard Falco. We will attach the IAM policy to the node instances to give them permissions to stream logs to Amazon CloudWatch as below –

Set up the Falco with IAM permissions

This creates a policy called EKS-CloudWatchLogs with privileges to send logs to Amazon CloudWatch.

Finally, apply the whole directory and all the listed configuration files (Configmap.yaml, daemonset.yaml and service-account.yaml) will be applied.

Set up the Falco Helm repository

Clone the falcosecurity/falco Helm chart repository as below and add the helm chart.

Go to falco/rules directory and check the default rules configuration files, which are shipped and can be readily applied. Please go through the default rule-set yaml files, which have detailed explanations of the rules specified in each of them. We can add our custom rules as well.

sample values.yaml is here below for your reference.

NOTE: The jsonOutput property is false in values.yaml by default. Set to true for json formatted output via fluent-bit.

Once this deployment is completed, Falco will be scanning our Kubernetes cluster pods for security or suspicious events behavior and sending the log events to Firelens, which transforms the JSON logs as per the configuration settings specified and finally sends the logs to CloudWatch.

At the end, we will have the following number of pods and deployments.

In the Console, go to CloudWatch to find the Log group streams.

Falco will catch any suspicious activity on the pods. We can test this by going inside any of the test deployments (in our case its NGINX application pods) and simulate certain commands to trigger default rules implemented by Falco.

Example 1: Simulating rules in falco_rules.yaml : Go inside any of the NGINX pods and execute the following statements, which will trigger the rule called “ write below etc” and “Read sensitive file untrusted”

You can use the above listed command (kubectl get pods) to list all the pods running on your EKS cluster and go inside (SSH) one of the NGINX pods and simulate the below suspicious activities. For example, we can SSH into one NGINX pod nginx2-7844999d9c-wdpz8 and simulate some actions which Falco will catch based on the rule sets we have created.

Falco is enabled to catch all suspicious activities on all the pods on the whole cluster instances.

Falco will generate the alerts on CloudWatch as shown below on the test simulation.

Example 2: Go inside any of the Nginx pod and execute below statements, which will trigger the rule called “Mkdir binary dirs.”

Falco will generate the alerts on CloudWatch as below on the test simulation.

I will create a YAML file with sample custom rules or append the rules to the existing default rules set. In this demo, I’m going to create a new custom rule set file called custom_alerts.yaml and put the desired rules conditions. In this example, I’m creating an alert for simple commands like whoami & who. When these commands are executed inside the NGINX container, Falco will alert us.

Finally upgrade the Helm chart with new configuration file to be added to the security alerting.

Now again SSH into any of the NGINX pods and execute the following statements, which will trigger the custom rules.

Falco will generate the following alerts on CloudWatch on the test simulation.

Likewise you can create as many custom rules based on the application or system requirement. Please check the detailed explanation on creating custom rules here.

Go to Amazon CloudWatch Insights in the AWS Console and create custom insights and dashboards as needed. In this demo, I’m going to create custom dashboard with the name falco and add with two Insights based on the rules we have simulated so far.

Finally, the dashboard Falco should look like the following screenshot as a sample.

Go to Amazon CloudWatch in the AWS Console and create an alarm as follows. 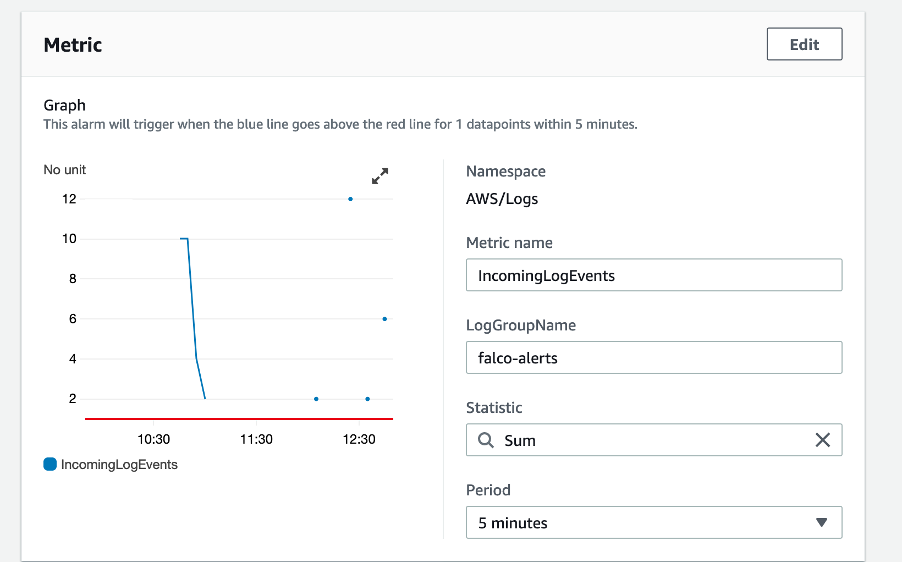 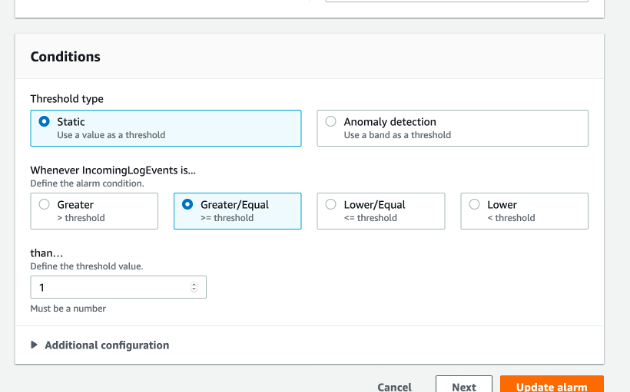 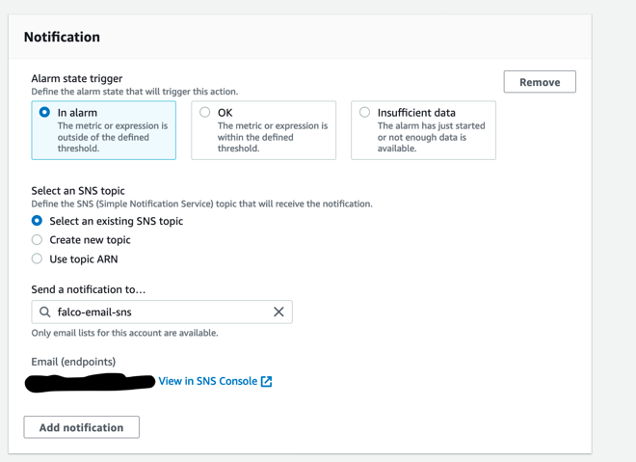 Overall the alarm should look like the following screenshot: 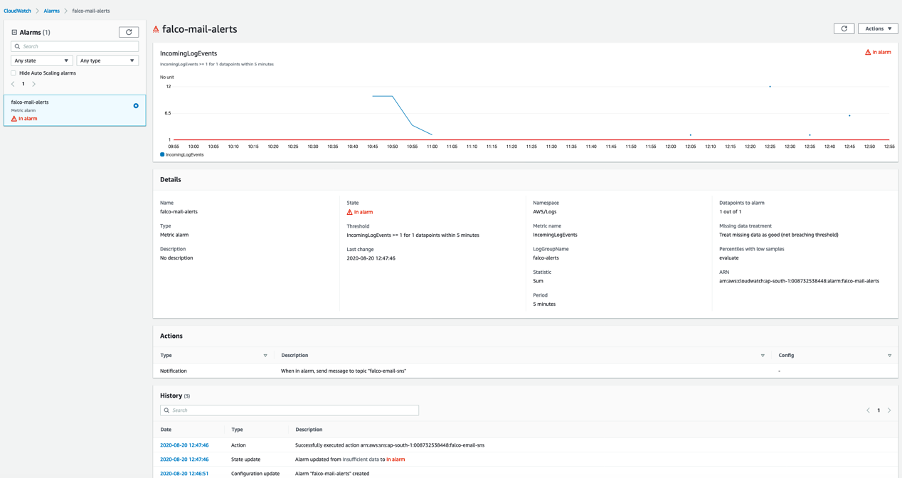 The CloudWatch alarm will send email alerts as below your email address mentioned:

In this post, I have demonstrated how you can set up an Amazon EKS cluster with a sample NGINX website and configure runtime container security analysis and alerting with CNCF Falco and Amazon CloudWatch using custom dashboards and alarms. CNCF Falco can be configured for stream any custom logs as well as standard alerts. Please check the AWS EKS security for latest updates and EKS security best practises GitHub page if you would like to suggest new features or check the latest roadmaps by the team.