Figure 1: EKS Cluster with two EC2 instances, along with the core components of the nodes

Zero-downtime migration of the workload to managed node groups can be achieved using the following steps:

1 Create a managed node group. When it is created, the daemon sets (aws-node and kube-proxy) will be available by default.

2. Taint all the nodes in the existing self-managed node group with “NoSchedule.” This will instruct the EKS scheduler not to schedule new pods onto these nodes. The existing pods will continue to run and serve traffic.

Self-managed nodes will have the name of the node group as a label. For applying the taint for all the nodes that are part of the self-managed node group, you can use the following command:

4. We now have to scale the deployments in “kube-system” so that they are available in managed nodes. The two deployments of interest in this setup are “core-dns” and “aws-load-balancer-controller.” In the initial setup, both these deployments have two replicas. Increasing the number of replicas will schedule these in managed nodes. Now, all the components that are required for the application to run successfully are scheduled on managed nodes.

5. Verify the new pods of the application, coredns and aws-load-balancer-controller, are running

7. Scale-in the deployments to the required capacity.

The complete EKS upgrade is a two-step process:

When a newer version of Kubernetes is available for your EKS cluster, you will be notified in the console. During the update process, EKS will launch new control plane nodes with the updated Kubernetes version. It also synchronizes, for example, “etcd” data to the new nodes. Once the new control plane components are launched, EKS performs readiness health checks on these nodes to verify they are working as expected. If any of these health checks fail, EKS reverts the update process, and the cluster remains on the previous Kubernetes version. The workloads that are running inside the EKS cluster will not be impacted by the upgrade process. However, newer Kubernetes versions might have significant changes. Based on this, the application manifest files might have to be updated to be compliant with the newer Kubernetes versions.

You can initiate the upgrade process in the console or through the CLI.

Open the EKS console home page and choose the cluster to upgrade: 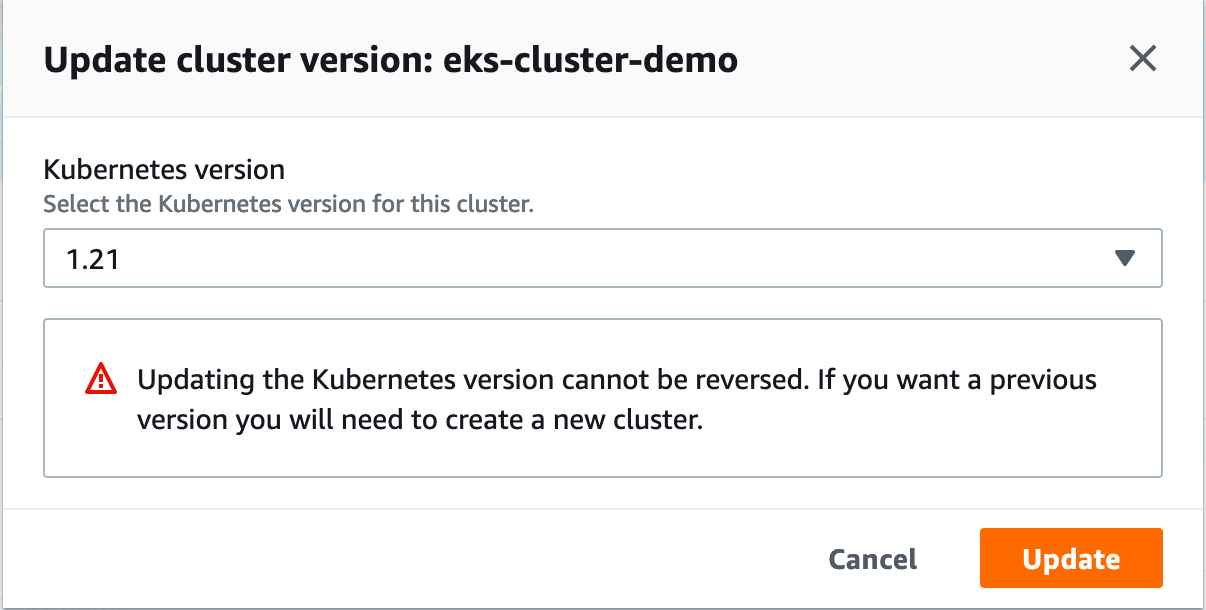 This will provide you the option to select the Kubernetes version to upgrade the cluster. Because EKS runs a highly scalable control plane, you can update only one minor version at a time. Note that the upgrade process cannot be reversed. Select Upgrade and the upgrade process will initiate.

When updating from the console, select Update, which will open a window as in the following image, then choose Update. 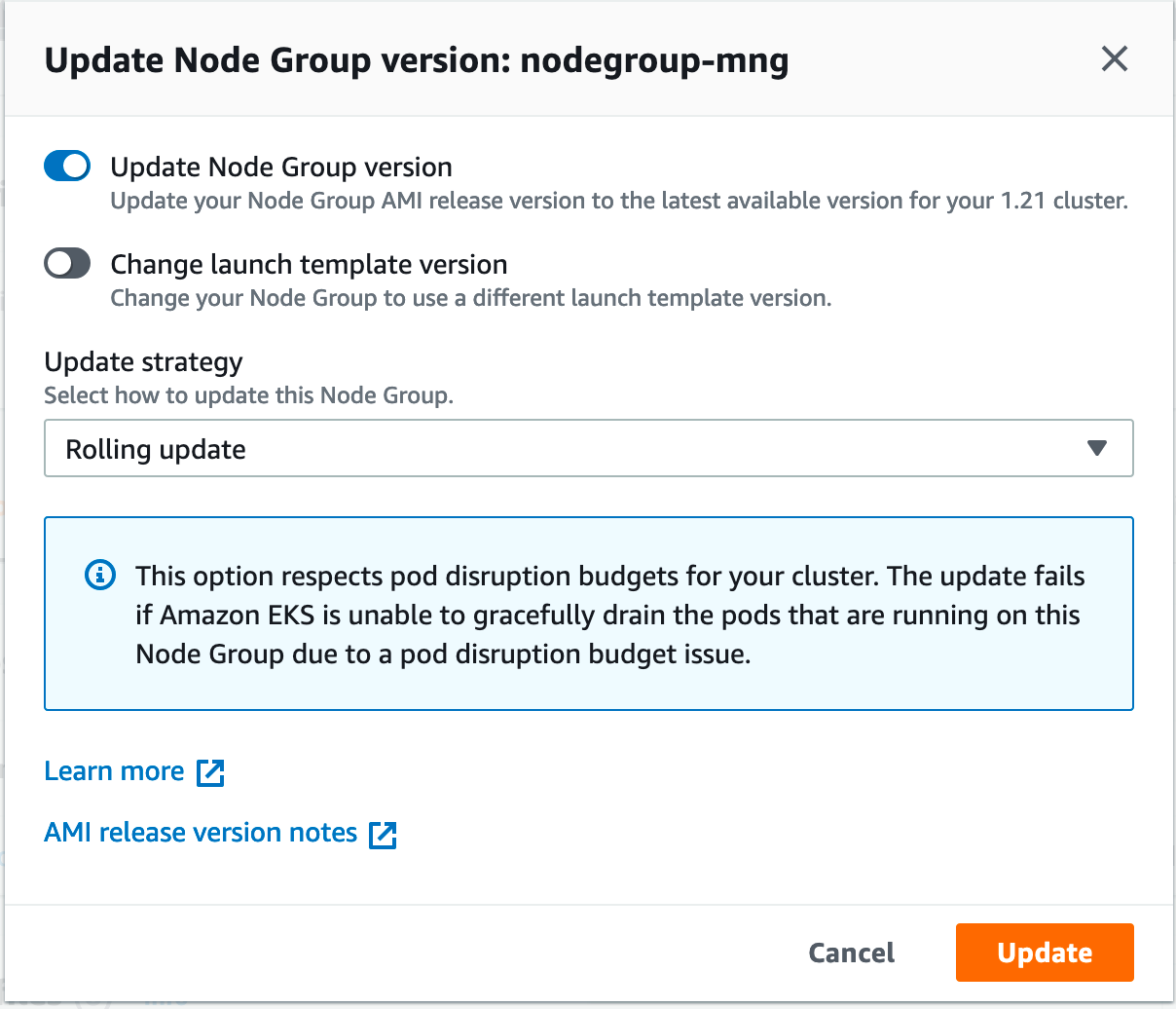 When updating from the CLI, execute the following command:

When you choose the Rolling Update strategy, EKS upgrades the managed nodes by incrementally replacing the old nodes with the new ones that have the updated AMI. Amazon EKS attempts to drain the nodes gracefully and will fail if it is unable to do so. You can force the update (by using the –force flag) if Amazon EKS is unable to drain the nodes as a result of a pod disruption budget issue. During the update process, EKS will update the Auto Scaling group to use the latest launch template with the new AMI and increment the Auto Scaling group maximum size and desired size. Once the new managed nodes are spun up, the EKS pods from old nodes are evicted and scheduled on new nodes. The old managed nodes are deleted after all the pods running in these nodes are evicted. The pods will now be running on the new nodes that are part of the managed node group. While EKS manages the worker node upgrade process, you are responsible for testing the process to ensure availability of your applications during a rolling update.

As we have observed in this blog post, using managed node groups removes the undifferentiated heavy lifting of managing and updating the worker nodes. Managed node groups automate the provisioning and lifecycle management of worker nodes in an EKS cluster, which greatly simplifies operational activities such as new Kubernetes version deployments and rolling updates for new AMIs.

A GitHub repository that contains all the sample code for migrating to EKS managed node groups will be made available soon.