In the version 3.53.0 of the modular AWS SDK for JavaScript (v3), we introduced concrete classes for AWS service exceptions which support asserting service exceptions with instanceof operator. In this post, we cover how to use it and how it improves the error handling experience.

Why did we do it?

We had received multiple requests for improving this feature. For example, AWS SDE Daniel Lees had asked this question on internal slack channel:

Hello, does anyone know why js aws sdk v3 doesn’t throw Errors or sub-classes of errors? Or at least objects in the shape of an Error? Technically it is not a javascript requirement to throw Errors or Error sub-classes, but it is generally considered good practice eslint, typescript-eslint,

It would be great to have concrete type definitions for TypeScript that is easy to use the error responses, similar to the happy case with XxxCommandInput/Output types.

As the result of this change, the SDK now constructs all the exceptions from the server side in specific classes. You can use instanceof to assert if a caught exception is expected as follows:

Once the error is asserted, the e is casted to the given exception type automatically. As a result, you can get code highlights and autocomplete from the IDE you are using as shown below: 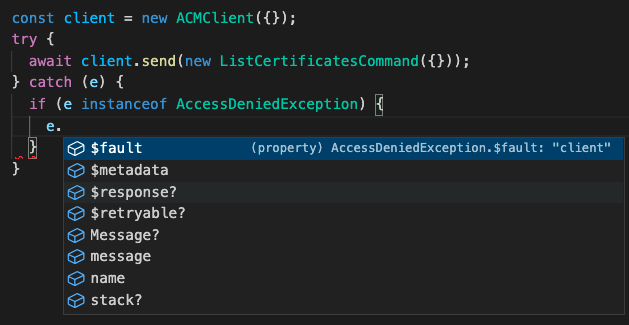 This change is backward compatible—all the existing error handling code will still work. You can still assert the error by the name value.

What to expect in service exception classes?

In each server-side exception instance, we provide a handful of useful shared traits that can assist your error handling logic.

The graph below provides an overview:

How can you contribute?

We value your feedback, so please tell us what you like and don’t like by opening an issue on GitHub.