Local Administrator Password Solution (LAPS) from Microsoft simplifies password management by allowing organizations to use Active Directory (AD) to store unique passwords for computers. Typically, an organization might reuse the same local administrator password across the computers in an AD domain. However, this approach represents a security risk because it can be exploited during lateral escalation attacks. LAPS solves this problem by creating unique, randomized passwords for the Administrator account on each computer and storing it encrypted in AD.

The following diagram illustrates the setup that I will be using throughout this post and the associated tasks to set up LAPS. Note that the AWS Directory Service directory is deployed across multiple Availability Zones, and monitoring automatically detects and replaces domain controllers that fail. 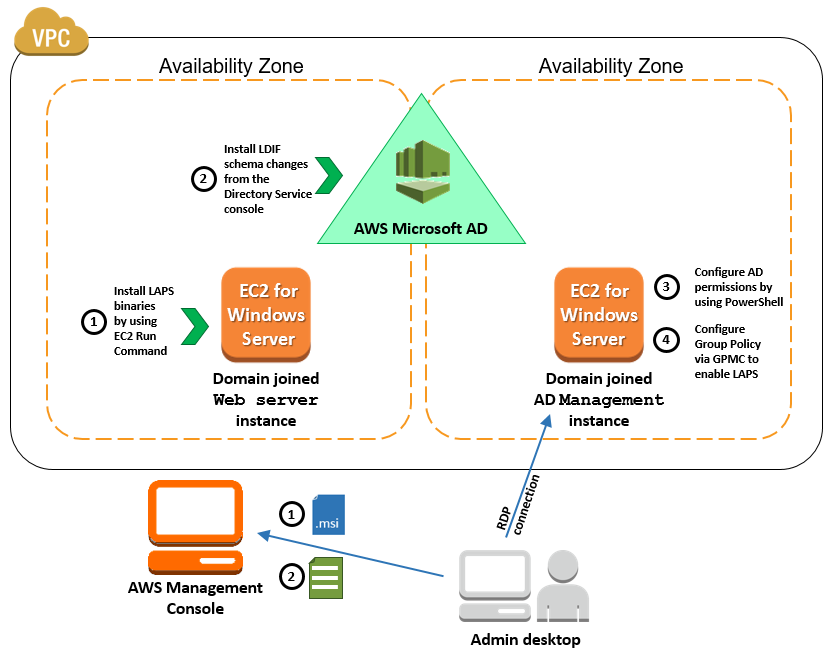 In this blog post, I explain the prerequisites to set up Local Administrator Password Solution, demonstrate the steps involved to update the AD schema on your AWS Microsoft AD domain, show how to delegate permissions to IT staff and configure LAPS via Group Policy, and demonstrate how to retrieve the password using the graphical user interface or with Windows PowerShell.

In this post, I use an AWS Microsoft AD domain called example.com that I have launched in the EU (London) region. To see which the regions in which Directory Service is available, see AWS Regions and Endpoints.

For the purpose of this post, my two instances are:

LAPS binaries come in the form of an MSI installer and can be downloaded from the Microsoft Download Center. You can install the LAPS binaries manually, with an automation service such as EC2 Run Command, or with your existing software deployment solution.

Leave the other options with the default values and choose Run. The AWS Management Console will return a Command ID, which will initially have a status of In Progress. It should take less than 5 minutes to download and install the binaries, after which the Command ID will update its status to Success.

If the Command ID runs for more than 5 minutes or returns an error, it might indicate a problem with the installer. To troubleshoot, review the steps in Troubleshooting Systems Manager Run Command.

To verify the binaries have been installed successfully, open Control Panel and review the recently installed applications in Programs and Features.

You should see an entry for Local Administrator Password Solution with a version of 6.2.0.0 or newer.

In the previous section, I used EC2 Run Command to install the LAPS binaries on an EC2 instance. Now, I am ready to extend the schema in an AWS Microsoft AD domain. Extending the schema is a requirement because LAPS relies on new AD attributes to store the password and its expiration time.

In an on-premises AD environment, you would update the schema by running the Update-AdmPwdADSchema Windows PowerShell cmdlet with schema administrator credentials. Because AWS Microsoft AD is a managed service, I do not have permissions to update the schema directly. Instead, I will update the AD schema from the Directory Service console by importing an LDIF file. If you are unfamiliar with schema updates or LDIF files, see How to Move More Custom Applications to the AWS Cloud with AWS Directory Service.

To make things easier for you, I am providing you with a sample LDIF file that contains the required AD schema changes. Using Notepad or a similar text editor, open the SchemaChanges-0517.ldif file and update the values of dc=example,dc=com with your own AWS Microsoft AD domain and suffix. 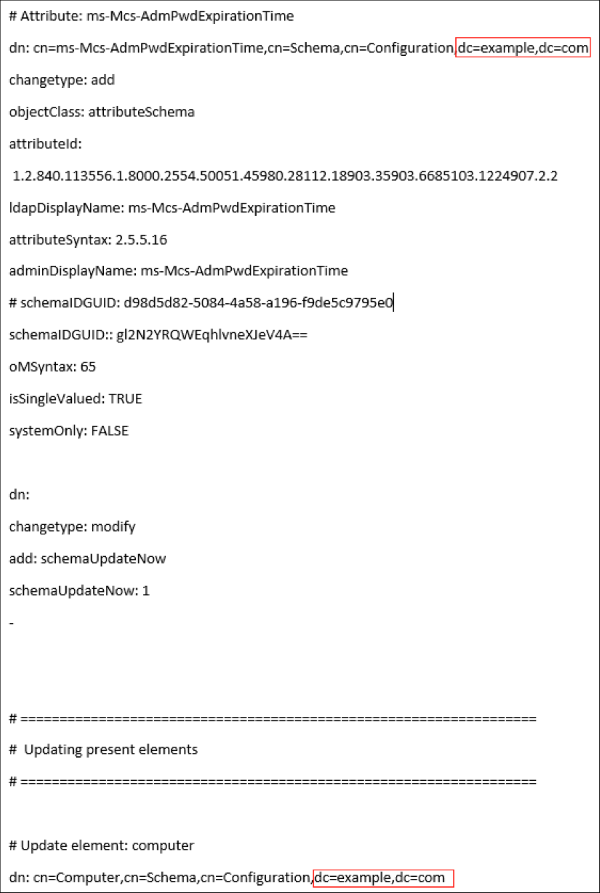 After I update the LDIF file with my AWS Microsoft AD details, I import it by using the AWS Management Console: 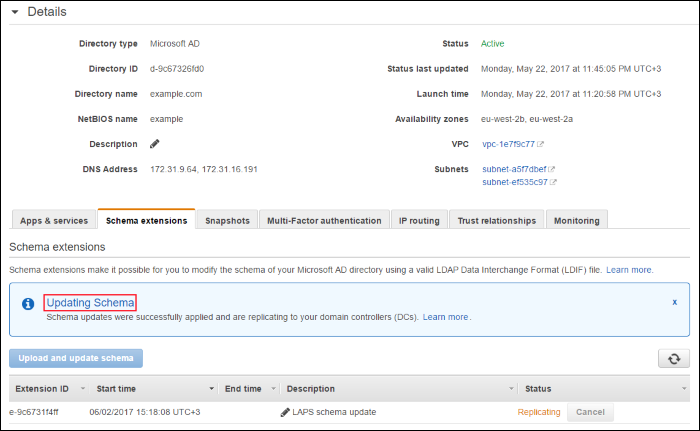 When the process has completed, the status of Completed will be displayed, as shown in the following screenshot.

In the previous section, I updated the AWS Microsoft AD schema with the required attributes for LAPS. I am now ready to configure the permissions for administrators to retrieve the password and for computer accounts to update their password attribute.

As part of configuring AD permissions, I grant computers the ability to update their own password attribute and specify which security groups have permissions to retrieve the password from AD. As part of this process, I run Windows PowerShell cmdlets that are not installed by default on Windows Server.

Before getting started, I need to set up the required tools for LAPS on my Management instance, which must be joined to the AWS Microsoft AD domain. I will be using the same LAPS installer that I downloaded from the Microsoft LAPS website. In my Management instance, I have manually run the installer by clicking the LAPS.x64.msi file. On the Custom Setup page of the installer, under Management Tools, for each option I have selected Install on local hard drive. 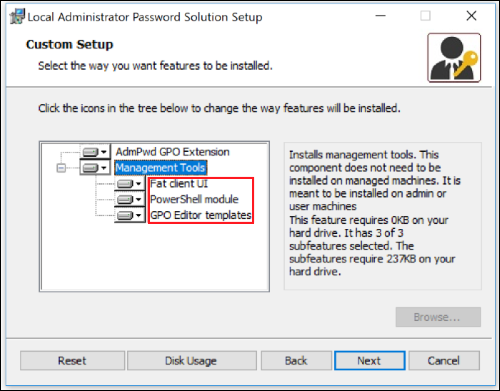 In the preceding screenshot, the features are:

The next step is to grant computers in the Computers OU the permission to update their own attributes. While connected to my Management instance, I go to the Start menu and type PowerShell. In the list of results, right-click Windows PowerShell and choose Run as administrator and then Yes when prompted by User Account Control.

In the Windows PowerShell prompt, I type the following command.

To grant the administrator group called Admins the permission to retrieve the computer password, I run the following command in the Windows PowerShell prompt I previously started.

In the previous section, I deployed the LAPS management tools on my management instance, granted the computer accounts the permission to self-update their local administrator password attribute, and granted my Admins group permissions to retrieve the password.

I am now ready to enable LAPS via Group Policy: 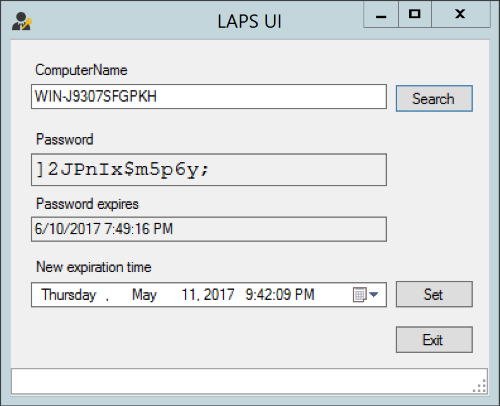 In this blog post, I demonstrated how you can deploy LAPS with an AWS Microsoft AD directory. I then showed how to install the LAPS binaries by using EC2 Run Command. Using the sample LDIF file I provided, I showed you how to extend the schema, which is a requirement because LAPS relies on new AD attributes to store the password and its expiration time. Finally, I showed how to complete the LAPS setup by configuring the necessary AD permissions and creating the GPO that starts the LAPS password change.

If you have comments about this post, submit them in the “Comments” section below. If you have questions about or issues implementing this solution, please start a new thread on the Directory Service forum.