How to use AWS Secrets Manager client-side caching in .NET

December 5, 2019: We removed some information about ASP .NET projects that is no longer relevant.
November 14, 2019: We updated the cache library code sample.

AWS Secrets Manager enables you to automatically rotate, manage, and retrieve secrets throughout their lifecycle. Users and applications can access secrets through a call to Secrets Manager APIs, eliminating the need to hardcode sensitive information in plain text. It offers secret rotation with built-in integration for AWS services such as Amazon Relational Database Service (Amazon RDS) and Amazon Redshift, and it’s also extensible to other types of secrets. Secrets Manager enables you to control access to secrets using fine-grained permissions, and all actions on secrets, including retrievals, are traceable and auditable through AWS CloudTrail.

AWS Secrets Manager client-side caching for .NET extends benefits of the AWS Secrets Manager to wider use cases in .NET applications. These extra benefits are now available without having to spend precious time and effort on developing your own caching solution.

The library is implemented in .NET Standard. This means you can reuse the same library in projects of all flavors of .NET, including .NET Framework, .NET Core, and Xamarin.

Note: Because the AWS Secrets Manager client-side caching library depends on Microsoft.Extensions.caching.memory, make sure you add it to your project dependencies.

The default refresh interval for “current” version of secrets (the latest value stored in Secrets Manager for that secret) is 1 hour. This is because latest version may change from time to time. The library allows you to configure this frequency to higher or lower per your specific application requirements.

If you request a specific version of a secret by specifying both secret ID and secret version parameters, by default the library sets refresh interval to 48 hours. Since each version of a secret is immutable, there is no need to refresh them frequently.

The cache library provides a thread-safe implementation for both cache-check as well as entry populations. Therefore, simultaneous requests for a secret that is not available in the cache will result in a single API request to SecretsManager.

How to use Secrets Manager client-side caching library in .NET applications

You can add Secrets Manager client-side caching library to your projects either directly or through dependency injection. The dependency package is also available through NuGet. In this example, I use NuGet to add the library to my project. Open the NuGet Package Manager console and browse for AWSSDK.SecretsManager.Caching. Select the library and install it. 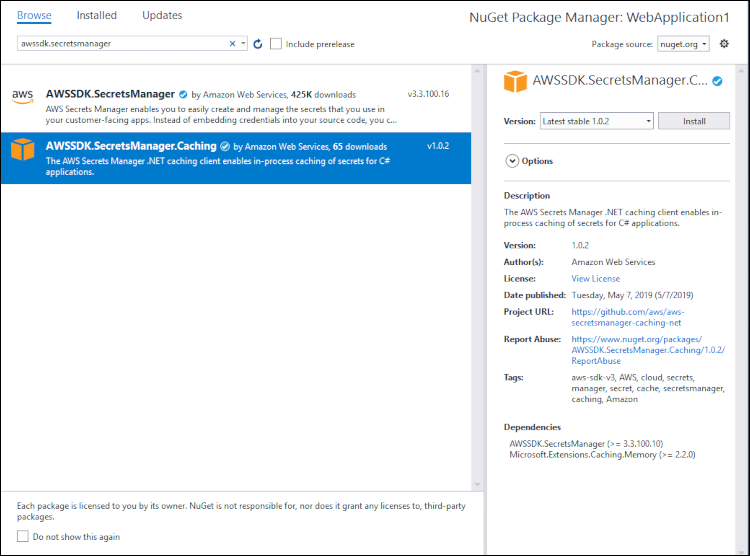 Before using the cache, you need to have at least one secret stored in your account using AWS Secrets Manager. To create a test secret:

How to add in-memory encryption and other custom extensions

The Secrets Manager caching library is designed to be extendable with your own custom logic. One possibility is to extend its implementation to include in-memory encryption of cached secrets to add another layer of protection on your retrieved secrets. For this purpose, you have to implement ISecretCacheHook interface and pass it in as an argument to SecretCacheConfiguration.

Having implemented SecretCacheHook interface as in the above snippet, I can now modify the constructor of my SecretsUserClass to add my custom encryption logic to Secrets Manager cache library:

It’s critical for enterprises to protect secrets from unauthorized access and adhere to various industry or legislative compliance requirements. Mitigating the risk of compromise often involves complex techniques, significant effort, and costs, such as applying encryption, managing vaults and HSM modules, rotating secrets, audit access, and so on. Because the level of effort is high, many developers tend to use the much simpler, but substantially riskier, alternative of hard-coding secrets in application code, or simply storing secrets in plain-text format. These practices are problematic from the security and compliance point of view, but they need to be understood as symptoms of the more fundamental problem of complexity in the systems enterprises have built. To address the problem of weak security and compliance practices, you have to address the problem of complexity. Complex systems can be simplified and made more secure when they are reusable, accessible, and are automated, needing no human interaction.

In this post, I’ve shown how you can improve availability, reduce latency, and reduce the cost of using your secrets by using the Secrets Manager client-side caching library for .NET. I also showed how to extend it by implementing your own custom logic for more advanced use-cases, such as in-memory encryption of secrets.