Growing up in Zimbabwe, Michael Maponga was fascinated by the Kung Fu movies made by Asian film industries. “I loved those stories so much because they were authentically told. They didn’t abandon their storytelling to fit into the western, Hollywood style of telling stories,” says Maponga. “And they made people fall in love with their own cultures.”

But after emigrating to the United States in 2002, Maponga discovered that the same could not be said for African films. Nollywood, the Nigerian film industry, is the second-largest in the world when it comes to annual movie output. Yet most people outside of Africa don’t have access to its content—or the films and videos produced by other African countries—due to a lack of global distribution. “People have a misconception of Africa because the media has fed people what they wanted Africa to be perceived as,” says Maponga. “But true African artisans, true African creatives, filmmakers, they haven’t had control of their narrative and distribution of those stories.” 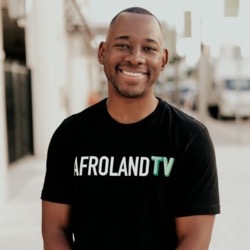 In 2015, after a 15-year career working as an actor and producer around the world, Maponga had an idea: he would start a free streaming platform, a “Netflix for African content,” in order to give African filmmakers a voice and help them share their culture. The service would offer the same level of authentic storytelling as the movies he had loved as a child, but showcase African films, Nollywood, and TV shows from Africa and its diaspora. “People have not experienced this type of storytelling. It is universal because these are universal stories, not just only for Blacks and Africans,” says Maponga. “It’s a platform to showcase different and new experiences in stories told from an African perspective.”

Because Maponga was only acquainted with the creative side of the film industry, he devoted himself to learning about streaming technology. “I’m a first-time founder,” says Maponga. “Nobody in my family has started something from the ground up, so this was a new ecosystem for me. I wanted to educate myself on the tech that makes streaming viable. And one of those platforms that I utilized first was AWS and the courses that it offers.”

After taking classes through AWS, Maponga found himself fluent in the workings of Content Delivery Networks (CDNs) and how to leverage foundational services, like Amazon S3. Once he was ready to build, Maponga continued utilizing AWS. “It’s very expensive to build streaming infrastructure from scratch,” says Maponga. “And for us to be able to jump on the AWS platform and be able to use AWS Elemental MediaLive, MediaConvert, all the software and platforms that AWS provides, it makes it that much easier.”

Early support through credits and mentorship from the AWS Activate Program was also a huge boon for the growth of AfroLandTV, per Maponga. “Our investment from Techstars enabled us to connect with a variety of valuable resources within the AWS ecosystem. We still have those contacts in my CRM that I speak to on a regular basis.”

Others began to recognize Maponga’s unique vision, and he secured his first investment in 2018. Early backers included Comcast NBCUniversal, Techstars, and MEI. “We’re very lucky to be in a position and to have strong backing and people that believe in the vision to bring African content to the world,” says Maponga. AfroLandTV officially launched in October 2020.

While streaming services have not yet been widely adopted in Africa, Maponga predicts that they will experience an increase in popularity soon—and he’s positioning AfroLandTV accordingly. So far, AfroLandTV is growing in the United States, Canada, and Europe. “These are the places we’re trying to build our foundations right now, early on,” says Maponga. “In five years, we’ll be controlling the advertising space and also producing original content on an annual basis.”

As Maponga gets ready to take AfroLandTV to the mass market, he’s looking forward to seeing what happens. “We’re just really excited to see how millions of people are going to engage and interact with this fresh, new content,” says Maponga. “Especially in this pandemic, where people are looking for something new to watch, a different experience…We have movies from South Africa, Zimbabwe, Kenya. You can travel the whole African continent on AfroLandTV.”