By Michael Buzzetti, Principal Engineer at The New York Times
By Barry Tait, Director of Modernization and Cloud Strategies at Modern Systems
By Phil de Valence, Solutions Architect for Mainframe Modernization at AWS

The New York Times had a critical business workload running on a mainframe as the core IT system supporting the daily Home Delivery Platform of its newspaper.

Using innovative automated refactoring, the application was modernized to object-oriented code, and the data was transformed from legacy indexed-files to a relational database.

This post describes the project, including the automated refactoring process and AWS architecture, as well as key lessons learned, business outcomes, and future technology plans.

The New York Times is an American newspaper with worldwide influence and readership. Founded in 1851, the paper has won 125 Pulitzer Prizes, more than any other newspaper. The Times is ranked 17th in the world by circulation and second in the United States.

The company’s core-business application managed daily home delivery of the newspaper since 1979, supporting a line of business worth more than $500 million annually. It represented years of accumulated experience and knowledge, and yet it significantly resisted modification and evolution.

In addition, the IBM Z mainframe running the z/OS operating system was expensive to operate in comparison to more modern platforms that had evolved at the company. It needed modernization to reduce operating costs and enable the convergence of the Digital Platform with the Home Delivery Platform.

An attempt to manually rewrite the home delivery application between 2006 and 2009 failed. In 2015, an evaluation of alternate approaches determined that a second attempt at redeveloping the application would have been much more expensive, and an alternative emulator re-hosting would have continued to lock-up data in proprietary technology.

With mounting pressure to quickly lower costs, the chosen strategy was to migrate code and data with automated refactoring. This approach promised functional equivalence, lower operational cost, and easier integration with modern technologies.

The mainframe application, named CIS on the mainframe and rebranded to Aristo after the migration, executed business-critical functionality such as billing, invoicing, customer accounts, delivery routing, product catalog, pricing, and financial reporting.

In 2015, CIS had grown to more than two million lines of COBOL code, 600 batch jobs, and 3,500 files sent daily to downstream consumers and systems. It consumed around 3 TB of hot data made up of 2 TB of VSAM files, and 1 TB of QSAM sequential files. It used 20 TB of backup cold storage.

The New York Times selected an automated conversion approach, which retains functional equivalence and critical business logic while converting core legacy applications to maintainable, refactored object-oriented Java. The code is analyzed during the assessment to determine cloud-readiness and the required effort to obtain the desired level of elasticity (i.e. horizontal scalability and vertical scalability) required by the application workloads.

To maintain the same user experience, CICS BMS Maps were migrated to equivalent web pages which mimic the original 3270 screens as closely as possible. Each COBOL program was converted to a Java class, and JCL was converted to JSR-352 XML using the Spring Batch runtime for Java. VSAM KSDS files were migrated to a relational Oracle database. During the refactoring process, all VSAM records were analyzed and a DDL generated for each of the best layouts chosen.

The table in Figure 2 shows the technology mapping between the legacy mainframe stack and the target AWS stack. 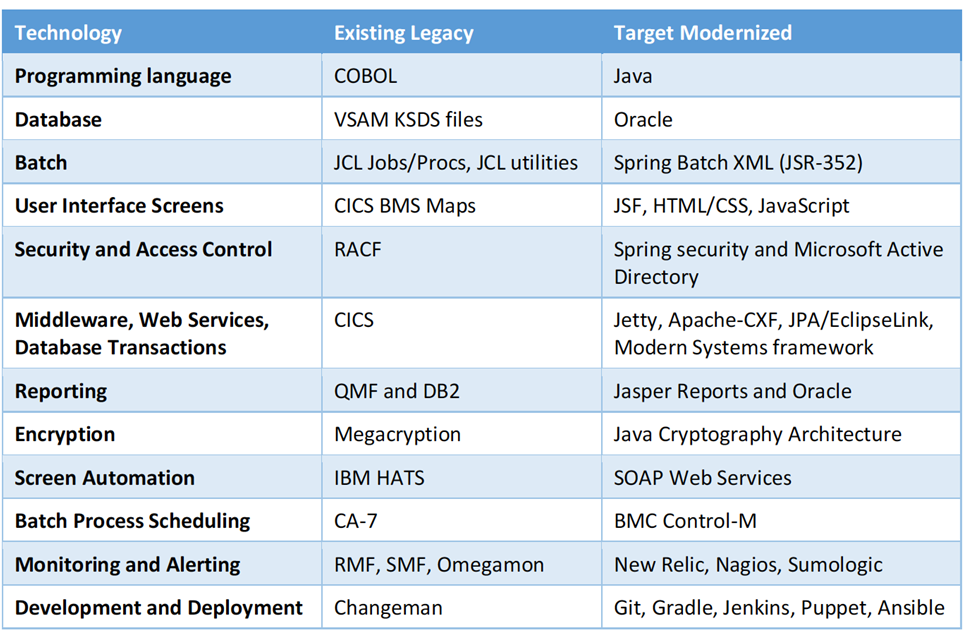 Replacement components were developed in situations where legacy application dependencies were not supported by the Modern Systems toolset (e.g. REXX, GVEXPORT), when off-the-shelf software packages were not available as a substitute, or if it made more sense to make use of capabilities of the new environment (vendor database backups and restore points, file system snapshots, etc.).

It was critical to have functional equivalence between the Java application and the COBOL application. Component groups assembled related components that would be runnable and testable together as a single entity through existing externally accessible interfaces, such as web services, user interface screens, database tables, and files.

Testing accounted for approximately 70-80 percent of the time spent on the project. The testing process was broken down into stages, with each stage progressively increasing in scope and level of difficulty in isolating the root-cause of test failures.

For these stages, test coverage needed to be high. It can be very time consuming and complex to create test cases, especially for batch jobs. Automation was critical to launch and analyze test cases repeatedly and rapidly.

As the project progressed, The New York Times pivoted on its overall data center strategy to make cloud the preferred deployment environment. After less than a year of running in a private data center, Aristo was migrated to AWS. The team had gained significant knowledge of what a successful migration looked like, enabling a migration to AWS with minimal impact to the business. 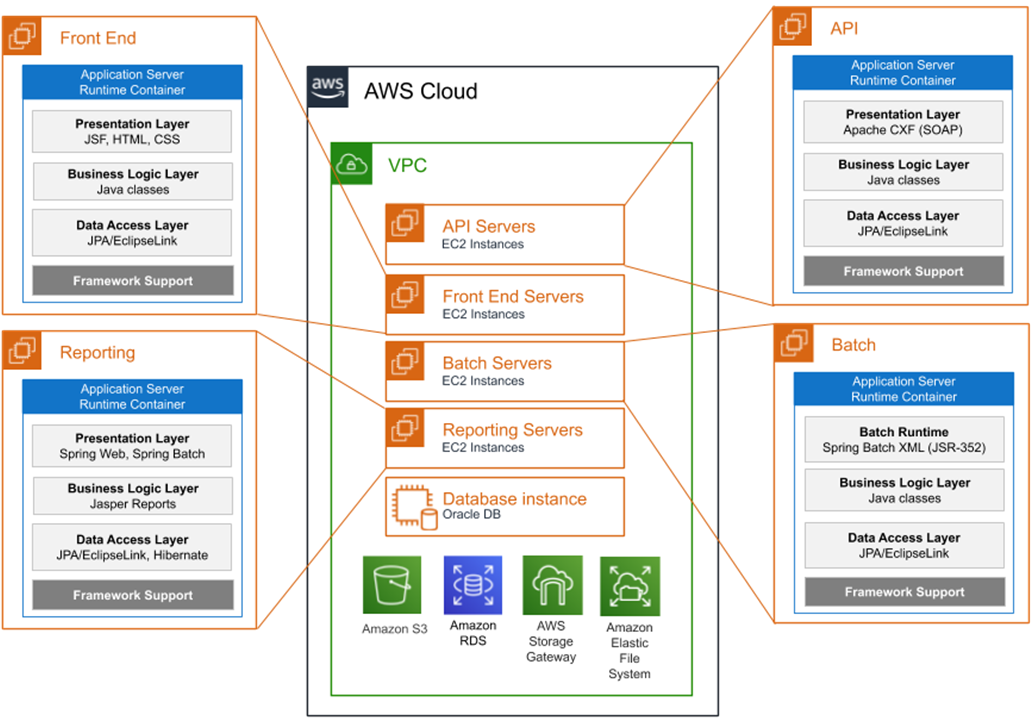 As shown in Figure 3, once migrated to AWS, the system was broken up into four main components:

In order to speed up delivery of releases, a Continuous Integration and Continuous Delivery (CI/CD) pipeline was created including:

The transformation of the application powering the Home Delivery Platform began in 2015. It was a two-phase process.

This phase lasted around two years and included both the COBOL-to-Java transformation as well as the VSAM-to-relational database conversion, resulting in the Aristo application being launched in production on-premises.

Around the end of this phase, The New York Times announced its cloud strategy impacting the future of Aristo platform and triggering the next phase.

Once the application was tested and stabilized, the work began in August 2017 to move the application to the AWS Cloud. This was an eight-month project, which also included the following changes:

Once in production on AWS in March 2018, Aristo benefited from maintenance and enhancements including promotion code table expansion, premium Home Delivery (HD) with new digital and paper offerings, and AWS cost optimizations.

Looking ahead, The New York Times is focused on these future improvements:

The most significant lesson learned in the project was around testing, which ended up being the most time-consuming and underestimated part of the project by far (70-80 percent of the time).

Test cases need to be granular enough and automated.

With the mainframe in operation for more than 35 years, the COBOL application had accumulated a fair amount of obsolete code due to a lack of adequate maintenance. It’s a best practice to identify this code and remove it, which reduces the amount of refactoring and testing work to do.

Mainframes are typically backend processing systems for other servers. Aristo generated more than 3,500 data file feeds and reports for downstream consumers daily. Having a good inventory of all the consumers and interfaces facilitates the modernization and harmonization of the communications.

For Java code maintenance or new feature developments, it’s a good practice to cross-train existing mainframe COBOL developers with Java skills. This allows them to provide both functional insight and knowledge about specific coding standards for the application, such as naming conventions or overall code structure.

Gaining a deep application understanding during the analysis and planning phase is important in order to define work packets, which are about the same size and complexity and allow reusing learnings for later packets. For example, it’s good to start with migrating the batch jobs that are often of high complexity and demanding.

If The New York Times had its cloud strategy already in place before starting the mainframe migration, the company would have chosen to migrate the mainframe directly to AWS, avoiding the extra work for designing and implementing the on-premises Aristo deployment.

While the modernization project began as a cost-cutting exercise, ultimately The New York Times took methodical and incremental steps toward more cutting edge technology adoption. All of this was done in an effort to improve customer service and gain competitive advantage in a unique industry that has seen significant market dynamic shifts since the project first began in 2015.

The team is accelerating how it builds software on the new platform by adopting an agile methodology and CI/CD pipeline. In addition, there is now easier access to data gaining business and technology insights, and more rapid use of cloud-native technologies.

Aristo went live on August 28, 2017. During the first year, it has billed over half a billion dollars in subscription revenue, processed nearly 6.5 million transactions, and continued to route the daily paper to The New York Times’ home delivery subscribers across the United States.

Remarkably, Aristo today costs 70 percent less to operate per year than it did to run on the mainframe in 2015, giving The New York Times a significant cost savings.
.

Modern Systems is an APN Select Technology Partner. They are a legacy modernization company with proven expertise across all areas of legacy code and data migration, infrastructure, operations, monitoring, and maintenance—both during and after the transition.